An Aura is a Poem 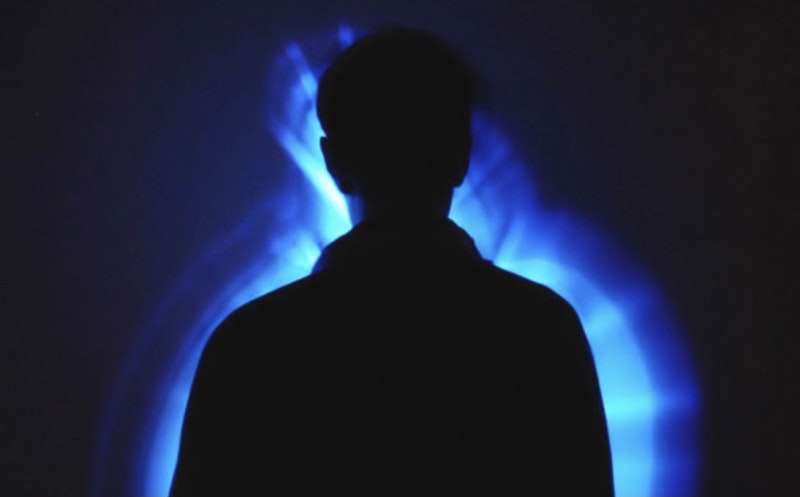 I’m not sure who hasn’t heard about auras. Just in case, let me explain: they’re “energy fields” that supposedly envelop human beings, generated by each person’s personality, or astral Self, or (more rarely) by static electricity from a wool jacket on a cold day. They’re almost invisible; the only people who can see them are those who think they can see all kinds of usually-invisible things, such as past lives, spiritual footprints, and literary value in the works of Carlos Castaneda. These people get very specific about auras: what color they are, how they’re moving, what they mean. The rest of us are tasked with believing in them, and many people do, to cite a recent study of various totally false things my wife thinks are facts. Auras are also known as “vibes,” incidentally, and “vibes” are fictions too, The Beach Boys notwithstanding. Things do vibrate. But they don’t do it for our sake, in order to stammer out some kind of comprehensible message.

So why are people so unmovable on this particular point? Why do “auras” and “vibes” continue to haunt our daily slang, and why can you sign up for online classes about them, even now? Here’s my credo: whenever you encounter an irrational belief that won’t go away, even under duress, you’re obliged to start looking for the reality that underlies it. There’s something interesting behind every shred of mythology still afloat in our culture.

Some cognitive scientists think “auras” are a really epic interpretation, and misreading, of the symptoms of synesthesia. Synesthesia is an inherited condition where sensory inputs, like sounds and images, intermingle and echo each other in the mind. A sound may “feel yellow,” or even send a yellow streak across the sufferer’s visual field. Like Asperger’s Syndrome, synesthesia is one of those glamorous disorders every academic wants to be diagnosed with. We can thank Vladimir Nabokov for that; he humblebrags about it in his memoir Speak, Memory. Anyway, it turns out that some shamans and healers who deal in auras are, in fact, diagnosable with synesthesia. So they’re not lying, exactly, about the halos they’ve seen. But that doesn’t make those halos realer or more meaningful; like so much else in the field of cognitive science, these findings go cold five minutes after their eye-catching debut.

The underlying cause of vibes, and auras, is the complex interaction between the overt meanings of our words and their subjective contexts. Consider the (overused) argument that objective truths are independent of the person who is saying them. For example, if I say, “that house is green,” I’m either right or wrong, objectively. It doesn’t matter why I’m saying it, what question I’m answering, what I think about the color green, or what I think of the family living in yonder green house. And this dogged claim about the “impersonal” nature of truth shows up all over. Its loudest, most annoying champion is Ayn Rand, but I encountered it in a socialist manifesto written by a wealthy, tenured bourgeois. “Regardless of how I happen to be living my life,” the author kindly explained, “my critique of our society is objectively true. My hypocrisies are not the issue here.”

Let’s grant the point—a house is certainly some color, in reality, no matter who’s describing it. And this “reality” is always in the foreground for us. It’s the most immediately comprehensible part of any utterance. It’s the easiest to translate from one person to another. It’s static, and stays the same over time; it’s also something others can verify. It’s the aspect of speech that’s most consciously accessible as well; we prioritize such tidbits of “knowledge” when we parse what other people say. That’s because the objective stuff becomes ours; we can appropriate and use it right away, regardless of context. And for some people—the sort who put up The Periodic Table as a poster in their dormitory—that’s the end of the story. They’d say that the part of a conversation which can be verified, or else disproven, is the whole of its meaning. But there’s much more going on.

In the “background” is a complex, branching system of associations. These are subjectively applied; they’re unique to the individual who is speaking, emerging from a matrix of her experiences and beliefs. It’s like the old joke that Slavoj Zizek loves to tell, about the man whose wife is cheating on him.

“We’re here to talk about your paranoid theories about your wife,” says the therapist. “I’m not being paranoid!” the man answers. “I caught her with another man last night! I have proof!” “Very well, I understand,” rejoins the therapist. “You have proof. Nonetheless you also have a paranoid theory that your wife is cheating on you. Let’s focus on that. We’re not here to talk about her!”

In any situation, there are subjective truths we have to address. They’re just as ineradicable and important as the “impersonal” validity of somebody’s words. They’re the real clue to what any statement “means,” when the meaning is considered in full. A man’s wife may have an affair, objectively, but what exactly that affair signifies remains entirely up to him (and her, and so on). Even a statement like “That’s a green house,” understood richly, in context, teems with subjectivity. When did the person speaking see the house last? What memories do they have of that color? What do they think of the whole neighborhood? When we converse with people, we sense all of this hovering below the immediate, apparent meanings of their words. We get to know them indirectly, through signposts that lead from their rational, limited comments to the vast expanse of their personality, intentions, and past. But all this remains vague; it’s a bunch of premonitions. We need a “magic” person, with the right kind of stagecraft, to transform such guesswork into a colorful, magical “aura” or a numinous “vibration.” In its way, their proclamations are as rigorous and logical (beneath the hood) as a deduction by Sherlock Holmes. Intuition, divination, and mysticism are often sleuthing by other means.

When we talk about reading “closely” into a text, we often justify that work on the grounds of “critical thinking”: a reader’s ability to gauge, for themselves, the truth of a written claim. The more you delve into the symbolism of Madame Bovary, we say to students, the better you’ll do responding (years later) to the latest editorial in the Times. This is baloney. Anyone can learn to weigh an argument without ever looking at Flaubert or writing an essay on him. “Close reading,” as it’s currently taught, often veers drunkenly between totally different justifications. Sometimes, we tell students it’ll help them distinguish the false from the true. Sometimes we just say it enriches their lives, and then add, “Stop whining.” But it’d be a great day for the humanities if we let ourselves endorse the truths that yawn below the surface. Instead of reaching for old truisms about using logic when we read, which is all that “critical thinking” really means, we could show how a carefully read, well-crafted poem ramifies into a tapestry of implications that extend far beyond its lines.

We’re all afflicted with synesthesia when we’re confronting a poem; I don’t know if Robert Frost really saw a “yellow wood,” but the yellow in that line hums with melancholy and the merciless passage of time. If we chose, we might trace the lives of our acquaintances like Henry James or Jane Austen: from the hints and cracks in our encounters with people back to each little thing’s gigantic cause. And this is the only way to finally put the “aura” industry to bed. Seers and diviners are an unacknowledged penance for our refusal to look closely at our world. There’s a nimbus around each one of us; it’s the story of our lives, written by us, projected by each word we say, but elusive as foxfire in the cold light of day.