Bring Back the Red Light Districts

A city’s culture suffers when defined by corporate chains. 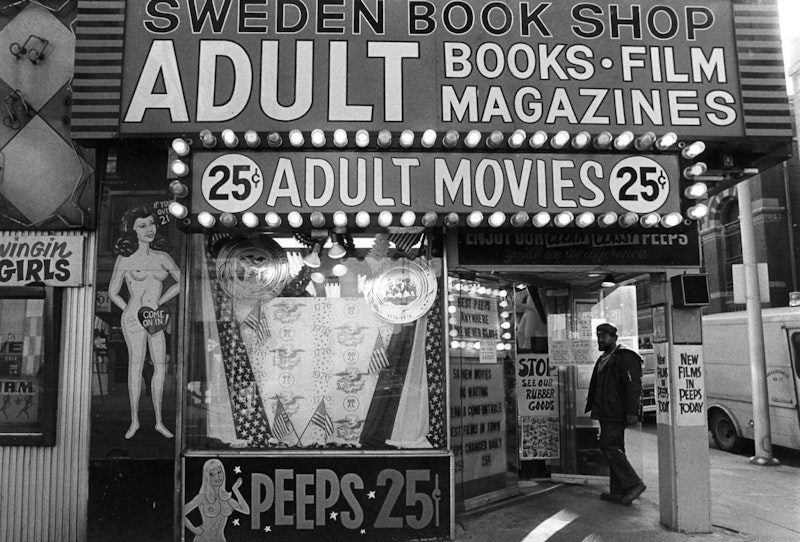 I suppose that in an era when high-minded guardians of society spend energy educating “ordinary people” about the racism of a Washington football team retaining the name “Redskins”—same with the Cleveland Indians and Atlanta Braves—there’s not much of a chance that the proprietors of strip clubs and porn shops (“adult bookstores”) will get a seat at any table of civic discourse. Too bad, for whatever you think about pornography or women making their living from dancing for (usually) lonely men, red light districts were at one time locked into a city’s culture. Frowned upon, of course, but a tourist attraction and source of jobs and tax revenue. Recall then-Mayor Rudy Giuliani’s “sanitization” of NYC’s Times Square neighborhood in the mid-1990s, conducted in the name of all that’s holy and clearing space for clean, high-rent chain establishments. A part of that city’s history was lost, to the dismay of more residents than you’d think, at least those who were willing to be vocal about it.

The same thing has happened—although not with Giuliani’s bulldozer—over the years in Baltimore, where “The Block” was at one time as famous, among a certain set, throughout the country as H.L. Mencken, steamed crabs, Johnny Unitas, Almond Smash soda, Natty Boh and stoop-sitting. The Block is now reduced to a handful of establishments on E. Baltimore St.; at its peak in the mid-20th century, the strip was an urban boardwalk of seediness, hustlers, grifters, working girls on the prowl, hard-luck men and women hanging out looking for a score, hobos, and, the launching pad for burlesque dancer Blaze Starr. Baltimore’s Police Headquarters was close by, but cops nodded and winked at the smut.

Some call this progress: rid the city of “urban blight,” concentrate on new high-rise developments and clean amusement for the affluent—even if, once again, it’s indistinguishable from most other cities—and all is well. Never mind that Baltimore, despite the massive government-subsidized renovations of neighborhoods, and the tax benefits handed out to corporations that don’t need them, remains a dangerous, de facto segregated city, where murders, if not on the scale of Chicago, regularly occur, the likes of which aren’t considered important enough to be publicized widely.

In 1973, when I first arrived at college in Baltimore, the city—just five years after the riots in the wake of Martin Luther King Jr.’s assassination, and the resulting “white flight” to the suburbs—was, aside from then-boho Fells Point, a desultory cultural wasteland, at least for those under 30. One night, just a week or so after settling in at school, my roommate and I walked down to The Block—who hadn’t heard of it?—and had a ball. And we weren’t even stoned. Unlike the dark, close-at-eight downtown attractions, such as they were, The Block was an explosion of lights and noise; it seemed like we were on a film set. The drinking age was then 21—although lowered to 18 in ’74 and then raised again several years later—but in the various clubs, “carding” minors wasn’t a priority. Trouble was, who could afford a $5 bottle of beer? So we just walked along, listened to the barkers outside the strip clubs, our jaws dropping at the come-ons from working gals, had a sausage at onetime institution Polock Johnny’s, tried out a few of the peep video booths, and, curiosity satisfied, took a bus back to the sedate confines of Johns Hopkins.

Maybe a year later, I recall a conversation between one of my smartest friends (who’ll remain anonymous since he’s now employed by a security-sensitive agency) and a couple of straight-arrow students on a sunny afternoon on the benches outside Levering Hall. Passing a joint around, “Mike” was annoyed by the self-righteous proclamations against The Block by the other fellows (and not on an “objectification of women” level, but rather pure disgust; after all, this was a time when the phrase “date rape” wasn’t yet invented, and the recounting of “gang-bangs” and “trains” by creepy braggarts wasn’t uncommon) and simply asked: “Are you serious? You’ve never popped a few quarters into a video booth at an adult bookstore?”

The other guys, nervously laughing, said of course not, and Mike just lowered his gaze and said, “It’s a part of this city’s charm. Walk around with blinkers on your eyes the rest of your pampered lives, but man, you jokers aren’t getting the education your parents are paying for. There’s more to college in a city than just going to Organic Chemistry and drinking shitty beer at shitty frat parties.”

My youthful curiosity in such establishments was sated back in those now remarkably quaint days of the 70s, but it’s the nanny-state notion that anything falling short of cookie-cutter conformity is borderline evil that irks me. I’m still amazed that timid Maryland legislators didn’t long ago allow a full-blown casino to set up in the Inner Harbor, not to mention the struggling Baltimore County suburb of Towson; again, the jobs and tax revenue would fill the city’s coffers. Same goes for the legalization of marijuana and prostitution. Fine by me if yet another wave of Starbucks and Whole Foods supermarkets fill empty retail spaces—anything’s better than boarded-up storefronts—but the lack of imagination exhibited not only by politicians, but “upstanding citizens” is, at least to me, mind-boggling. It’s true that the dominance of unique independent retailers that once gave real character to any city is long gone, but surely there’s room for some kind of individuality. Or maybe not.