She Loved Those Sunny Black Children

A racist book of long ago. 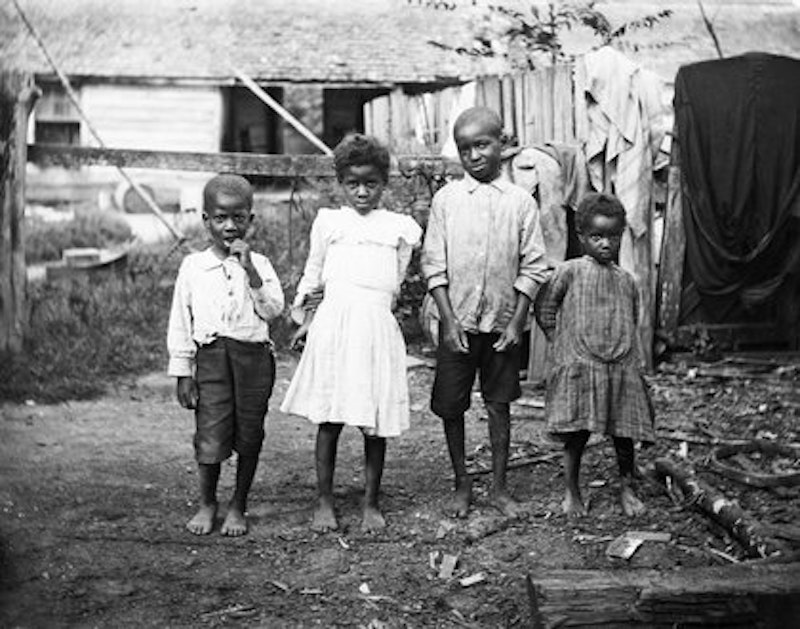 I have a battered old volume that I found in the used bookstore near the college. It's called Little Folk of Many Lands and it's immensely racist but full of good will. I think that's a good combination to look at. Most people know that racists aren't necessarily bigots, that you don't have to hate to be racist. What Little Folk shows us is the real jackpot, when somebody loves the subject people and is racist about them in an unashamed, open way.

Let me stress: the book is an old one. It looks like a block of mint-green cloth with threads hanging all along the edges; the pages are heavy, even creamy, and when the book is shut you can see where the gilt is still hanging on. Written in the flyleaf: “To Victor, from Uncle Bob and Aunt Mamie, May 1900.” The author is Louise Jordan Miln, and she wrote Quaint Korea and When We Were Strolling Players in the East, “etc., etc.” Next to the title page one sees a dim black-and-white photo: “A Hindu Bridegroom Going to His Marriage.”

But not Chapter One. The verse it opens with: “You are lublier dan de day/Your eyes so bright/Dey shine at night/When de moon am gone away.” The first sentence (introduced by a well-fed, gloriously spreading capital T): “The cheerfullest, the very cheerfullest thing on earth is a well-fed but not over-clad pickaninny.” An actual book. “I believe that half the sunshine in the southern half of the United States (and where is sunshine brighter?) is made by the darkies,” Louise Jordan Miln declares.

Sunny as she is, she can still engage with the past, or romp about with it. “And yet we stole them,” she says. “They do not belong to North America at all? True! Indisputably true. We, that is our ancestors, stole them.” Her solution is right at hand. “But were they not lucky,” she writes, “those bad, bold ancestors of ours, to steal anything so delightful? When before has any man—have any men—succeeded in stealing sunshine?” She turns the people into sunshine.

Miln is a lesson in how much we accept by way of I'm-all-right-Jack, the universal principle that the world is basically okay as long as we have what we want. These people she loved were having their faces walked on, and that was okay because her face hadn't been walked on. These weren't just people she liked well enough—she delighted in them. But it made no difference. She accepted the worst that could happen to her babies, or just about the worst. She didn't even need a push from ill will. She found a way to cherish people without giving a damn what happened to them.

That would seem like a tough circle to square, but Louise Jordan Miln wasn't a genius. What she did, millions of nice Southerners did as well. I guess I'll have to keep that in mind the next time I hear about animal rights.