Maintaining Liberty: Story of a Statue 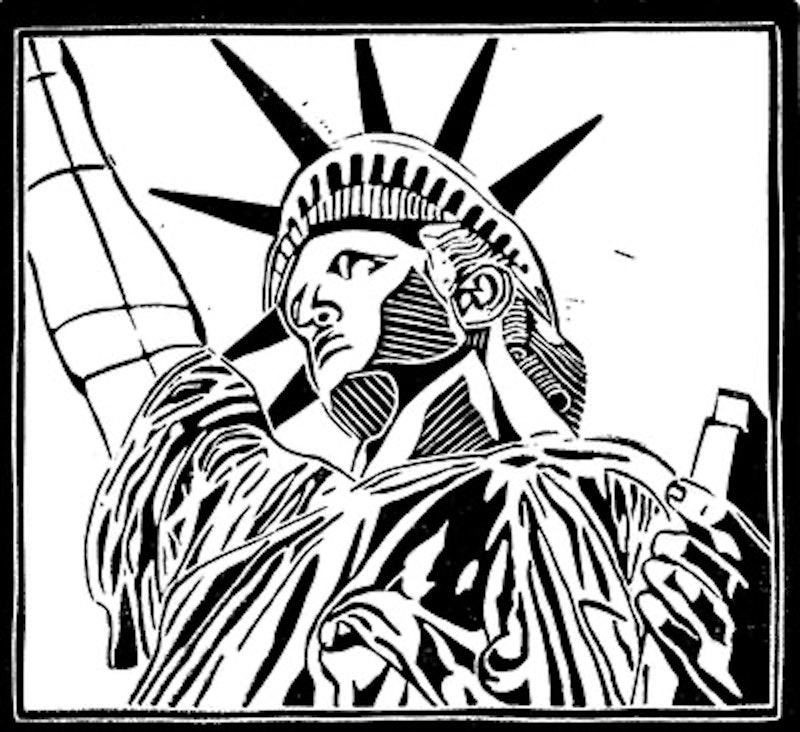 The Statue of Liberty was a gift from France to the United States in 1886. It has come to symbolize freedom for immigrants coming to America to start a new life. The statue was inspired by French politician Edouard de Laboulaye’s proposal that a great monument be made to honor America’s independence and the abolition of slavery. Laboulaye suggested that France finance the statue while the United States pick the location and pay for the building of the pedestal.

French sculptor Frederic Auguste Bartholdi designed the statue. The robed female figure represents Libertas, the Roman goddess of freedom. She holds a torch symbolizing progress. The seven rays on the diadem (the crown) form a halo representing the sun, the seven oceans and the seven continents. The left hand holds a tabula ansata (a tablet evoking law) upon which is inscribed the date of the Declaration of Independence. The statue rises over a broken chain, half hidden by the robes. Bartholdi modeled the face of the statue after his own mother.

In 1875, Laboulaye announced plans for the statue revealing its formal name "Liberty Enlightening the World." France reacted positively, raising funds among the wealthy, the working class and school children. Support in the United States was less favorable. The Panic of 1873 caused an economic depression in America that delayed construction of the statue and the Washington Monument. The New York Times reported, "No true patriot can countenance any such expenditures for bronze females in the present state of our finances."

Bartholdi moved ahead with fabrication of the torch-bearing arm and the head. The arm was shipped from France to Philadelphia for the 1876 Centennial Exhibition. It proved popular as visitors climbed to the torch balcony to view the fair grounds. The arm was returned to Paris where it was exhibited with the head for the 1878 World's Fair.

Original architect Eugene Viollet-le-Duc died in 1879 and was replaced by famed designer Gustave Eiffel. Eiffel contributed an iron truss tower to hold the statue. He also built a metal armature allowing the copper skin to expand on hot summer days without cracking. Eiffel included two interior spiral staircases providing access to the observation point in the crown. He also added an observation platform around the torch.

The statue was completed in 1884, one year after Laboulaye’s death. US President Rutherford B. Hayes chose Bedloe's Island in New York Harbor as the statue’s home. Poet Emma Lazarus contributed the sonnet “The New Colossus,” which included the lines, "Give me your tired, your poor, your huddled masses yearning to breathe free."

American fundraising efforts for the pedestal remained dismal. Newly elected President Grover Cleveland vetoed a bill to provide $50,000 for the project. Newspaper publisher Joseph Pulitzer announced a drive in his paper The World to raise $100,000. This caught the imagination of New Yorkers, especially school children, who donated as little as five cents apiece. The drive ultimately raised $102,000 from more than 120,000 donors.

On June 17, 1885, the French ship Isere arrived in New York Harbor carrying the disassembled statue in crates. 200,000 people lined the docks to greet the steamer. The pedestal was completed in 1886 and reassembly of the statue began. Due to the size of the pedestal, scaffolding could not be erected. Workers dangled from the armature by ropes as they installed the copper skin. Incredibly, no one died during construction.

The statue was formally dedicated on October 28, 1886. Only dignitaries were allowed on the island for the ceremony though several hundred thousand people attended a morning parade. Not everyone was happy. Suffragists were offended that only two women attended the dedication ceremony, Bartholdi's wife and de Lessep's granddaughter. The Cleveland Gazette, an African-American newspaper, opined: "Until the 'Liberty' of this country makes it possible for a colored man to earn a respectable living for himself and family without being Ku-Kluxed… the idea of 'Liberty Enlightening The World’ is ridiculous in the extreme."

The statue was designed as a lighthouse. Lights were placed inside the torch and a power plant was installed on the island. Unfortunately, the torch only produced a faint gleam and was nearly invisible at night. In 1901, the statue was transferred from the US Lighthouse Board to the War Department.

In 1916, during World War I, German saboteurs ignited a massive explosion in a weapons armory on nearby Black Tom Island. The blast caused damage to the torch-bearing arm of the statue. The ascent to the torch was closed and has remained so ever since. Artist Gutzon Borglum (who later sculpted Mount Rushmore) redesigned the torch, replacing much of the original copper with stained glass.

In 1924, President Calvin Coolidge declared the statue a national monument. It was transferred to the National Park Service in 1933. During World War II, the statue was not illuminated at night due to wartime blackouts. On D-Day, the statue lights flashed "dot-dot-dot-dash," Morse code for V, "for Victory." Bedloe's Island was renamed "Liberty Island" in 1956.

In 1982, engineers discovered that the right arm was improperly attached to the main structure and was at risk of collapsing. In addition, the head had been installed two feet off center and one of the halo rays was wearing a hole in the right arm when the statue swayed in the wind. President Reagan formed a commission led by ex-Chrysler CEO Lee Iacocca to raise funds for repairs. Eiffel's iron armature was replaced by corrosion-resistant stainless steel. The torch was replaced with an exact replica while the halo ray was realigned by several degrees to prevent contact with the arm.

Following the September 11 attacks, the statue was closed to the public. The pedestal reopened in 2004 but the statue was not reopened until 2009. Since then only 240 people per day are allowed to ascend the statue. Reservations must be acquired up to a year in advance and visitors are subject to a security screening.

The statue has been prominent in numerous movies over the years. The torch is the setting for the climax of Alfred Hitchcock’s 1942 film Saboteur. In Splash, mermaid Daryl Hannah first appears at the statue's feet. The statue is knocked over in Independence Day and the head is ripped off in Cloverfield. The most famous movie appearance comes at the end of Planet of the Apes when the statue is seen half-buried in the sand.

From its foundation to the top of the torch, the statue stands 305 feet high. It weighs 204 tons. Visitors have to climb 354 stairs to reach the crown. In high winds the statue can sway up to three inches while the torch can move five inches. The green patina is caused by copper oxidation called verdigris. The statue is struck by up to 600 bolts of lightning each year. Two people have committed suicide by jumping off the statue, one in 1929 and the other in 1932.