San Pedro has a reputation for haunted houses. 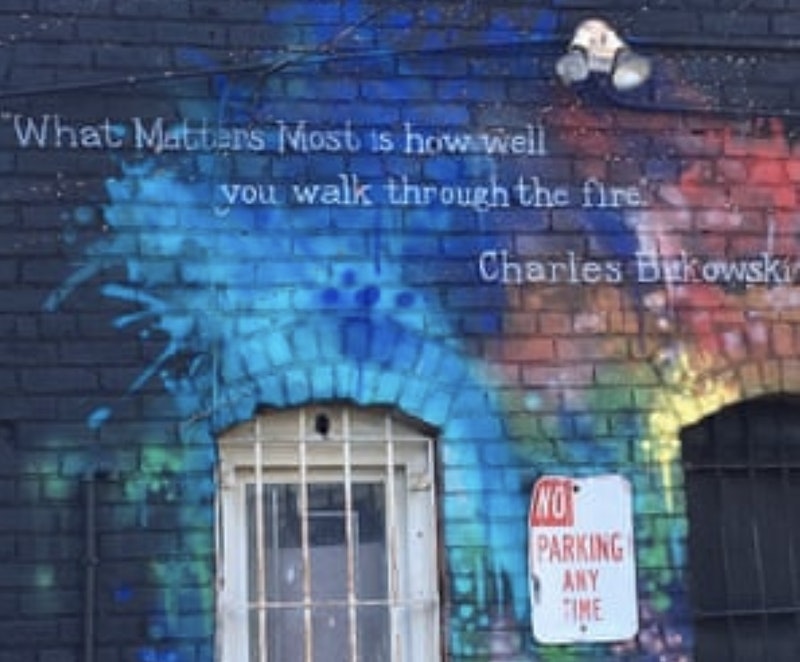 The first time I visited San Pedro, I drove past a Motel 6 when I noticed a naked man hanging outside a window two floors over the street. Pedestrians walked past as if nothing strange was happening. I concocted scenarios to explain the incident. Perhaps the man was having a clandestine affair when the woman’s husband walked in. Maybe he was tripping on drugs. Maybe it was a fraternity hazing ritual.

San Pedro is quirky. The aging American cars and antiquated stores feel like an old episode of The Rockford Files. There are bait and tackle shops, bait and burger shops and a bait barge in the middle of the harbor. There’s a Croatian chicken cafe with a massive hen sculpture on the roof (Slavko’s Harbor Poultry). There’s a store specializing in 18th-century inks and quills (Hare & Trove). The National Watercolor Society is headquartered here.

San Pedro is the birthplace of Mike Watt from the Minutemen and Joe “Pegleg” Morgan, former head of the Mexican Mafia. This is where film director Tony Scott died by suicide from jumping off the Vincent Thomas Bridge. It’s also where the film The Usual Suspects shot the boat explosion scene and where Steve Buscemi’s ashes are spread in The Big Lebowski.

San Pedro is a small working-class neighborhood of 80,000 residents known for the Port of Los Angeles, the largest seaport in North America. It’s home to several maritime museums and a Frank Gehry-designed aquarium. The town is named after Saint Peter of Alexandra, whose feast day (November 24) is when Portuguese explorer Juan Rodriguez Cabrillo discovered the area in 1542.

To get to San Pedro, you take the 110 Harbor Freeway from downtown Los Angeles south until the freeway ends. You’re deposited onto Gaffey Street, San Pedro’s main thoroughfare. The heart of the neighborhood is 6th Street where you’ll find the Warner Grand Theater, a vintage art deco movie palace. Screenwriter Robert Towne (Chinatown) grew up in San Pedro. His experience watching Sergeant York at the Warner Grand Theater in 1941 made him want to become a filmmaker.

Author Charles Bukowski lived in San Pedro from 1978 until his death in 1994. He hung out at Williams Bookstore on 6th Street, the oldest bookstore in Los Angeles until it shuttered in 2013. Bukowski’s favorite coffee house, Sacred Grounds, still exists. A painted portrait of Bukowski rests on the wall with a quote from one of his poems: “What matters is how well you walk through the fire.” Local bars display photos of Bukowski even though his wife Linda prevented him from drinking publicly in town.

Western novelist Louis L’Amour spent time in San Pedro before shipping out as a merchant seaman in World War II. Author John Fante also lived here. In his novel Ask the Dust, Fante wrote that San Pedro “smells of mice and dust” and is filled with “sand and oil and grease choking the futile palm trees standing like dying prisoners, chained to a little plot of ground with black pavement hiding their feet.”

In 1929, a landslide in the Point Fermin neighborhood of San Pedro caused cliffside homes to fall into the ocean. The resulting graveyard of crumbled homes became known as the Sunken City. The area’s popular with tourists despite its danger due to continued hillside erosion. In 2003, five people fell to their deaths. Four more died in 2006. In 2007, Mario Danelo, a kicker from the USC football team, plunged 100 feet to his death.

In 1933, a 6.4 earthquake centered in Long Beach and San Pedro killed more than 100 people. San Pedro was rebuilt with tiny bungalows affordable to blue-collar workers. The town attracted immigrants who appreciated the small town feel and Midwest values. Many worked at the Star-Kist tuna cannery on Terminal Island or the Phillips 66 oil refinery in neighboring Wilmington. The largest employer was (and remains) the Port of Los Angeles in San Pedro Bay and Long Beach harbor.

The Port was founded in 1907 and annexed by the City of Los Angeles in 1909. During World War II, the US military appropriated the port. Shipbuilding replaced trade as the primary economic engine. After the war, the port refocused its efforts on shipping and receiving. In 2020, the Port employed 480,000 workers in the five-county area. Container ships comprised 20 percent of all cargo entering the United States. This included 10.9 million containers, 222 million tons of goods and 102,000 automobiles.

Given its proximity to ritzy Palos Verdes, San Pedro home prices are escalating even while downtown San Pedro maintains a sense of menace. A recent shooting at a weekend softball game at a park killed two people and injured seven. Car theft is a problem as is gang activity. Crimegrade.org gives San Pedro an overall crime grade of C- with violent crime at D+. The northwest part of town near Palos Verdes is considered safest while the east part of town near Terminal Island is most crime-ridden.

San Pedro also has a reputation for haunted houses. Historians speak of hidden bunkers beneath San Pedro Hill where 16th-century Spanish explorers tortured and killed Native-Americans. Fort MacArthur, a World War I army installation, is said to be haunted by the ghosts of dead soldiers. The most famous local case is the so-called “San Pedro Haunting” where a woman and her two children were besieged by flying objects and ghostly apparitions in their downtown San Pedro home. The events have since been made into a book and movie.

As new investment money pours in, gentrification is inevitable. A waterfront area known as Port O’ Call Village with mom & pop restaurants and park rides was torn down in 2018. The region is being refashioned as West Harbor with upscale eateries and shops. Locals fear San Pedro is losing its blue-collar ethos. With 5000 new housing and business locations currently in development, San Pedro may soon become another pretentious town like Manhattan Beach.