37 people have died in eastern Kentucky floods as of Saturday, and 400 people are displaced. Where's the government relief? 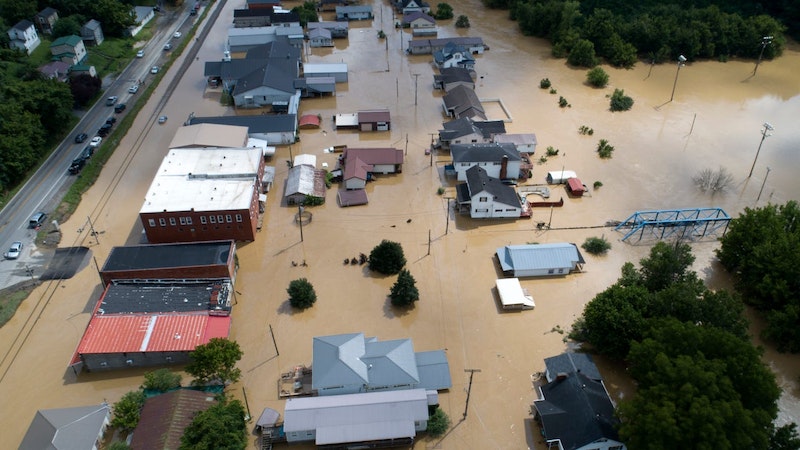 The death toll from the flooding in eastern Kentucky is 37 as of Saturday, and over 400 people are displaced in state parks, which Gov. Andy Beshear announced is just “a fraction” of the total number of displaced residents who are likely staying with friends and family members. Infrastructure is heavily damaged, roads are washed away, power and water services disrupted, and cell service is slowly being restored. Some of the hardest hit areas are Breathitt, Clay, Knott, Letcher, and Perry counties. Each of these counties has a poverty rate of over 20 percent, with Clay County the highest at 37.3 percent, according to the US Census Bureau.

Eastern Kentuckians are no strangers to struggle and hardship. Flooding, always been a threat in the region, was exacerbated after Northern bankers bought up huge swaths of land after the Civil War and hired locals to mine it for coal. Moreover, climate change has intensified flooding in the region. “Hundred-year floods” have occurred for the last three years and are expected to become more frequent.

Relief efforts are inadequate to the scale of the disaster. As of Thursday, 7000 customers in eastern Kentucky had no power, and 18,000 service connections were without access to safe drinking water, with a further 45,600 under a boil water advisory. Millions of dollars were raised to provide relief, but given the near certainty that another round of catastrophic flooding will occur perhaps as soon as next year, those sums will merely rebuild some of what was there prior to the devastation, when what’s needed is billions more for infrastructure improvements which could help to avert disasters like this. No one, especially the people of the region, should delude themselves that such investments will be forthcoming.

Gov. Beshear gave a briefing last Tuesday which revealed that hundreds of local residents, those that didn’t have their homes washed away, converged on an emergency shelter at West Perry Elementary in Hazard, Kentucky, (Perry County), one of the hardest hit counties in the state. The reaction by local residents is perhaps the only positive in this disaster. The remainder of the hour-long briefing was dedicated to the various efforts aimed at restoring a sense of normalcy.

Crises in the United States aren’t merely events which merit response, reflection, and action, they’re also fodder for the banal culture war that plays first chair in the minds of extremely online dwellers, like those on Twitter. An opinion article in The Washington Post, by writer and Pikeville resident Courtney Lucas, reveals the schadenfreude that’s commonly on Twitter. She quoted a number of tweets which she found “depressingly familiar,” including such gems as “these people got what they voted for,” and “maybe it’s God’s punishment for being a bastion of ignorance and repression.” Novelist Silas House, a resident, collected screenshots which revealed other vicious remarks.

The rebuttals by House and Lucas are decent and sympathetic, but they may rest on a certain ignorance of what Twitter is. Twitter’s a hate engine, and while the words we see on social media, for instance, are often inhumane, their points of origin aren’t merely the minds of lonely, angry, alienated individuals, but rooted in social decay. And nameless nobodies, spewing filth about natural disaster victims are in effect, harmless. Many people would prefer they keep their loathsome opinions to themselves, but voicing them online may sublimate the potential for real violence. There’s an incentive for the extremely online to share opinions on everything. This is most prominent on the left-wing side of “the discourse.” An event (in this case, a flood in a poor, largely white part of the country) occurs, the online leftist hive must come together in unison and coalesce around the correct opinion as a signal of allegiance. What matters is who the event effected—are they subjects of sympathy or scorn? The answer depends upon their political affiliation, race, class, and the part of the world they inhabit.