Remembering terminals and station infrastructure during the pandemic. 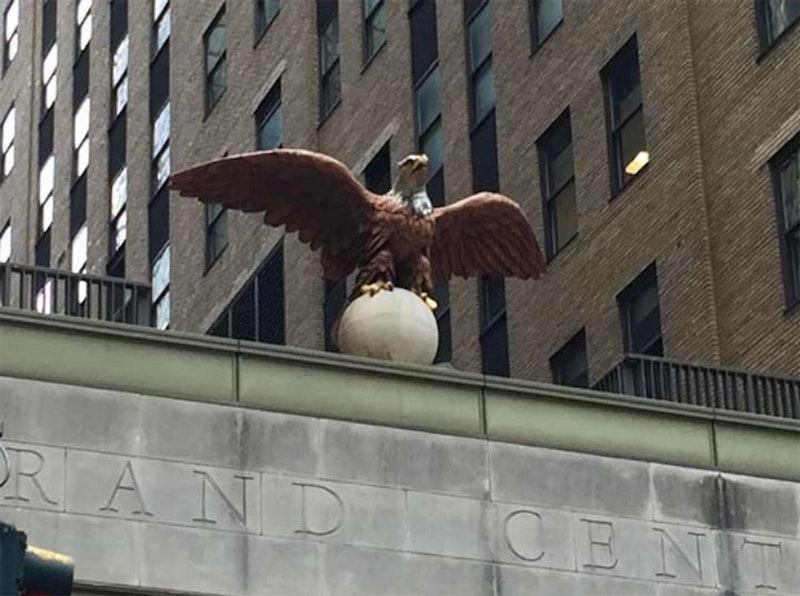 I miss heading into Manhattan. I haven’t been able to do it since the COVID Crisis settled upon the metropolitan area in March, and there’s nothing I’d like better to get back into town and rove around with the camera. My focus, as always, is infrastructure. I enjoy taking a look, for example, at subways, trains and their peculiar station designs. There’s nothing much to say about Penn Station, which is pretty much a basement with staircases down to the platforms, but Grand Central Terminal is the real deal, an original structure from 1913 that stands in the place of two separate station buildings that preceded it, and I always found something there to absorb me.

Two enormous iron eagles can be found outside Grand Central Terminal, one on the Park Ave. Viaduct as it curves past Vanderbilt Ave. and E. 42nd St., and this one, perched above a GCT entrance at Lexington Ave. and E. 43rd. I was surprised to learn these eagles aren’t part of the 1913 Grand Central that exists today. Instead, they were added when the original GCT, constructed in 1873, that was renovated from top to bottom in 1898. The two eagles, along with eight or nine others (it’s unclear how many), were in their original places until the original building was torn down and replaced with the present GCT. The 13-foot wingspan, two-ton eagles were scattered around to several different owners until two found their way back to GCT. They were located on properties in Bronxville and Garrison, NY and donated to the MTA, which put them in their current positions.

Two can be found at the Vanderbilt Museum on Long Island; one is on a private estate in King’s Point, Nassau County; another at the Space Farms Zoo in Sussex, NJ; another at Philipse Manor in Sleepy Hollow (formerly North Tarrytown); another in upstate Phoenicia, NY; and two at St. Basil Academy in Garrison. 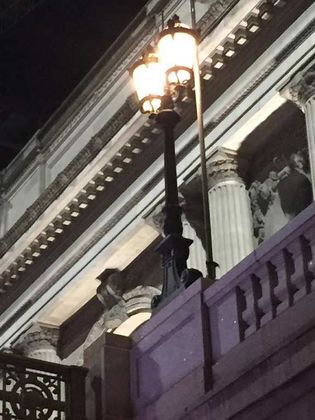 I’m unclear on when the ramp that takes Park Ave. traffic up over E. 42nd St. and around Grand Central Terminal was built. It was faced with demolition like its sister, Penn Station, but an intercession by preservationists that included Jacqueline Kennedy Onassis helped save the old barn, which underwent a tip-to-toe renovation for several years in the 1990s. A plaque on the fence underneath the lamppost dates the ramp to 1919, but I’m not sure; the plaques are wrong sometimes.

The ramp’s original lamps, complete with incandescent bulbs, are still in place; they were renovated along with the rest of the terminal in the 1990s and repainted. Some, though, still have their reddish primary coats of paint.

There was another set of lamps that lit the ramps surrounding the terminal, in this case, sets of twins. About three decades ago they disappeared, only to be replaced with simple pipes with luminaires attached to them. Most of those replacements are still there. However, the city has restored two of the Twins and restored them to the top of the viaduct over 42nd St. where it splits into two roadways.

However, for the centennial celebration of Grand Central Terminal in 2013, GCT turned to Historic Arts & Casting in West Jordan, Utah, which magnificently restored two of the bronze posts to a pristine appearance, and they were subsequently reinstalled. Will other reproductions appear? 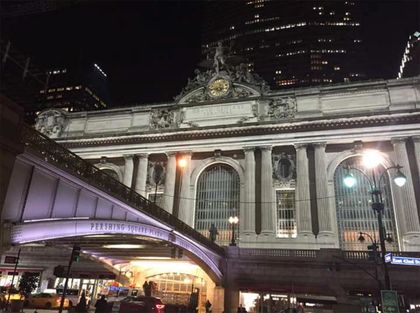 Never in my life have I heard, “Meet me at Pershing Square.” When I’m meeting up with people in this part of town, we usually gather at the iconic clock in the center of the vast marble floor at the center of Grand Central Terminal, shown here. Nonetheless the section of E. 42nd St. that’s overshadowed by the Park Ave. Viaduct, and formerly intersected by Park Ave. itself (between 41st and 42nd, Park Ave. is now a pedestrian passageway) is officially known as Pershing Square, the name emblazoned on the iron bridge that crosses E. 42nd.

General John Joseph Pershing (1860-1948) was the leader of the American Expeditionary Force in Europe when America entered WWI in 1917. Previously he’d served in the so-called Indian Wars, fighting the Apache and the Sioux from 1886-1890; he served in the Spanish-American War in Cuba in 1898 and later in the Philippines in 1903 after which President Roosevelt elevated him to brigadier general; he fought Mexican revolutionary Pancho Villa when he raided the American Southwest in 1916; and the Germans in WWI. It can be said that Pershing led troops on more continents and against a greater array of opponents than any other previous American commander.

When the Park Ave. Viaduct was built, the name of the still-relatively young Pershing was bestowed on its crossing over E. 42nd St. 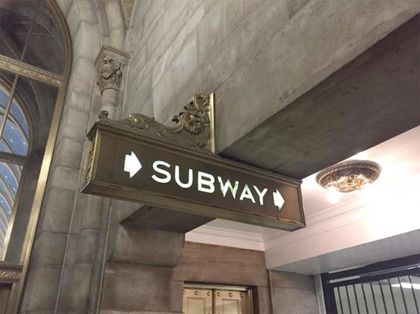 I discovered this illuminated subway sign serendipitously when wandering around the Grand Central Terminal area prior to checking into a midnight temp job at a financial publisher. It’s just inside the cavernous entrance to Cipriani on E. 42nd just east of Park Ave. and consists of gilded wrought metal. The MTA has vouchsafed its preservation, and could just as well removed it and installed a standard sign, so I’m glad they decided to make an exception to the rule here. Also check out that gorgeous lamp sconce next to it.

The 1921 Italian Romanesque Revival Bowery Bank Building was converted years ago to the Cipriani restaurant and grand event space. The interior is 65 feet high, 80 feet wide and 197.5 feet long and is built from marble, limestone, sandstone and bronze. Both the original Bowery bank building downtown at 130 Bowery and here are considered two of the great event spaces in NYC.

The IRT subway has served Grand Central Terminal with 4, 5, 6 and 7 train service since the late-1910s. 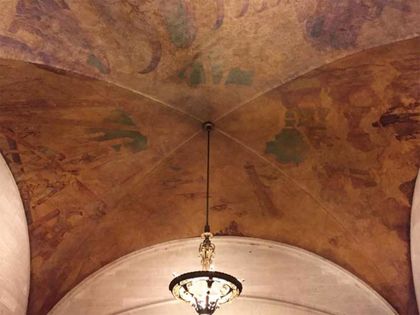 There are many ways to get from the subway from Grand Central Terminal to the streets outside, and I often chose the Graybar Passage, which is a corridor from the Great Hall through the Graybar Building to Lexington Ave. I’ve recently written about the Graybar Rats, which are on a Lexington sidewalk canopy, but there are other quirks as well, such as this ceiling mural by Edward Trumbull, whose work also graces the lobby of the Chrysler Building across the street.

Trumbull’s Graybar mural predates his work in the Chrysler by four years, 1926 vs. 1930. The theme here, as you might expect, was modern travel. Unfortunately time hasn’t been kind to the mural; the ones across the street were restored in 1999.

It’s the only remaining ceiling mural in the Passage. Other vaults featured paintings of blue skies and clouds, but were painted over a while ago. Here, the mural shows scenes like an electric train, a bridge resembling High Bridge, skyscrapers and steel manufacturing, airplanes (including Lucky Lindy’s Spirit of St. Louis) and zeppelins, once thought of as a prime competitor to the airplane for air travel until the Hindenburg disaster.

Either the Graybar ownership group or the MTA should part with a few ducats and restore this Trumbull mural—his works in the Chrysler and Rockefeller Center have enjoyed such treatment. 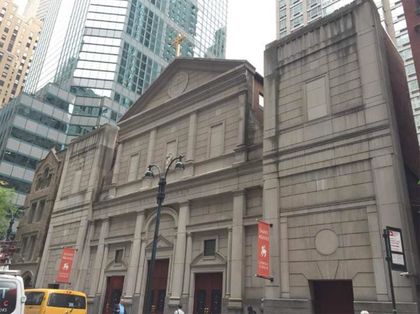 I’m a nostalgist and always find something to miss from long-gone jobs, friends, circumstances. When I worked at Photo-Lettering (the city’s biggest type shop) from 1982 to 1988 it was “second-shift” so I’d arrive in midtown during the evening rush, as I began work from 5 to 7 p.m. Making my way over to 216 E. 45th I’d take E. 43rd sometimes and would pass St. Agnes Church. I noticed the church again on my way home one early morning recently.

However this St. Agnes is not the same building I passed all those years ago; the old building from the 1870s, constructed for workers on the original Grand Central Station, burned down in 1992, and what we have now is a somewhat anodyne building constructed in 1998, although it’s flanked by two of the old church’s remaining towers. I was surprised to learn that the painting behind the altar was done by Sean Delonas, the occasionally controversial editorial cartoonist for the New York Post from 1990-2013.

Archbishop Fulton J. Sheen (1895-1979) was based at St. Agnes and his riveting radio and later television sermons from the 1930s through the 1960s (“The Catholic Hour” and “Life Is Worth Living”) were recorded in a studio at the old church, as well as the Adelphi Theater further uptown. Mayor Ed Koch sub-named E. 43rd for Bishop Sheen between Lexington and 3rd Aves. in 1982.