Life with the Top Down

Reflections on a Beetle convertible. 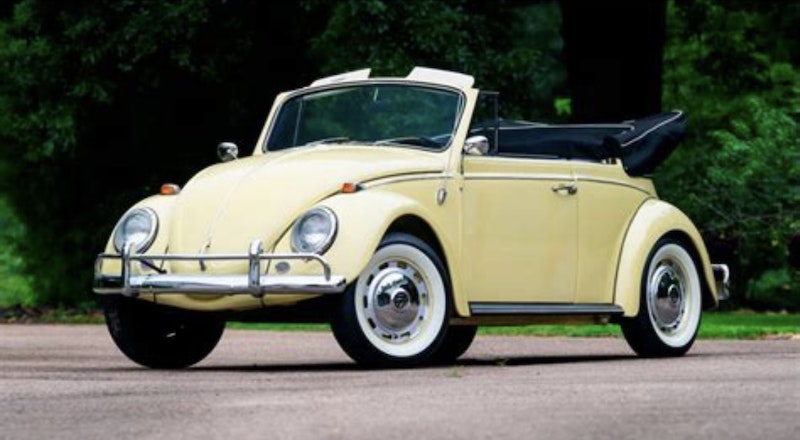 When you’re driving a Beetle convertible on the open roads of rural northwestern New Jersey, it’s hard to feel bound by history, either your own or that of the culturally iconic car at your command. The wind blows your hair, the rounded hood gleams in the sun. You come to a hiking trailhead with limited parking, but the Beetle’s compact, its turning radius a marvel. Among the SUVs and pickup trucks, you can find your place, standing out visually even as you fit in.

When you’re in your 50s, you’ve surely made some mistakes: opportunities missed, relationships botched, ideas about the world that turned out to be wrong. If you’re fortunate, some of the big decisions have gone well. The Beetle’s no midlife-crisis car of roaring engine or exorbitant price tag, but it will attract some admiring glances, maybe a few smiles, including from pedestrians with whom you share the open air.

Ours is a 2019 Beetle, from the model’s “Final Edition,” the last ones off the assembly line. Its color is “Safari Uni,” reminiscent of the “Harvest Moon Beige” of the old New Beetle. Beetle aficionados know these things. It’s not our first Beetle convertible. We had a 2003 one in “Aquarius Blue,” a powder-blue that accentuated the femininity associated with the New Beetle (the models from 1997 to 2011). We bought that one used, from our friend the hardware-storeowner, whose wife had put just 20,000 miles on it in six years. There was a built-in flower vase on the dashboard. My wife was bemused that I’d no problem with the car’s girliness, but I grew up in New York City, where adolescent angst takes no automotive bent.

My future wife was a Saturn girl when we met, partly from a “buy American” streak. As we dated, I learned how to drive stick on her SL1, or more precisely, relearned what I’d done semi-competently with my left hand on a visit to Scotland long ago. When the SL1 was through, we got a 2007 Saturn Aura Green Line, a mild hybrid. Then, with a baby on the way, we became a two-car family with our first Beetle. When the Aura developed electrical problems, we gave it to charity and got the minimal tax deduction: $400. When the 2003 Beetle’s transmission was shot, the auction went better: $1200. A broken-down Beetle convertible will still draw people who are ready to save it.

Having become VW enthusiasts, we replaced the Aura with a 2019 Tiguan, a mid-sized SUV whose cool name (“tiger iguana”) belies its fundamental practicality; a flip-up third row expedites suburban carpooling, for example. We bought our 2019 Beetle in some haste during the final illness of my mother, who was an artist. I texted a photo of the beige vehicle from the showroom floor to my brother to show mom. “I love the color,” she told me the next day.

Families that survived Nazi persecution often shunned German cars in the postwar decades, though I don’t know if my father, who’d fled the Nazis, held that view. Volkswagen was a prominent target of such boycotts, given its early history. Hitler took a close interest in the company, wanting to motorize Germany through a “Strength Through Joy” car affordable to the Aryan masses; designer Ferdinand Porsche preferred the moniker “People’s Car.” Like much German industry, Volkswagen was complicit in wartime abuses such as slave labor. With Germany’s defeat, the company was taken over by the Allied occupation authorities, who subsequently reconstituted it as an independent firm. This is important history to know, but I see no basis for thinking a VW purchase today is somehow soft on Nazism. An American of largely Jewish ancestry driving the People’s Car is, in fact, something the Nazis didn’t want.

After the war, Ivan Hirst, a British major running Volkswagen’s factory in Wolfsburg, started production of the Beetle in significant numbers. The vehicle became familiar to British and American troops. In 1949, the first convertible versions became available, built by Volkswagen contractors, including the firm Karmann, and marketed under the French term for convertible, “cabriolet.” Gradually, in the 1950s, both sedan and convertible Beetles spread overseas. Some versions had semaphore flags that popped up from the car’s sides to signal a turn.

In the 1960s, the Beetle, along with Volkswagen’s Bus, gained a place among an emerging hippie customer base. Relatively simple maintenance was part of the allure. Hippies with do-it-yourself mechanical skills could keep their VWs going on the cheap, swapping parts from one vehicle to another. The Bus had the added appeal of serving as crash pad as well as conveyance. Movies about a sentient Beetle called Herbie the Love Bug began appearing in 1968.

The Beetle set a record in 1972 when, with over 15 million off the assembly line, it had been produced in larger numbers than the Ford Model T. By the end of the decade, however, the Beetle was being phased out, with VW focusing on the growing hatchback market through its model known as the Golf or Rabbit. Beetle sedans stopped being manufactured, and in 1979, production of Beetle convertibles, now done in Mexico and Brazil, came to a halt.

The Beetle’s resurrections in the 1990s and 2010s raise the possibility that another version is yet to come. If so, it can be expected to be electric, as VW is pushing its product line broadly in that direction and has acquired a trademark on the name E-Beetle. For now, though, the Final Edition Beetle is, in fact, final. Our beige black-topped Beetle convertible cruises the hills along the New Jersey–New York border; hugging the curves; turning on a dime; open and free.