A rare run up to the Bronx for Forgotten New York, up to Crotona Park. 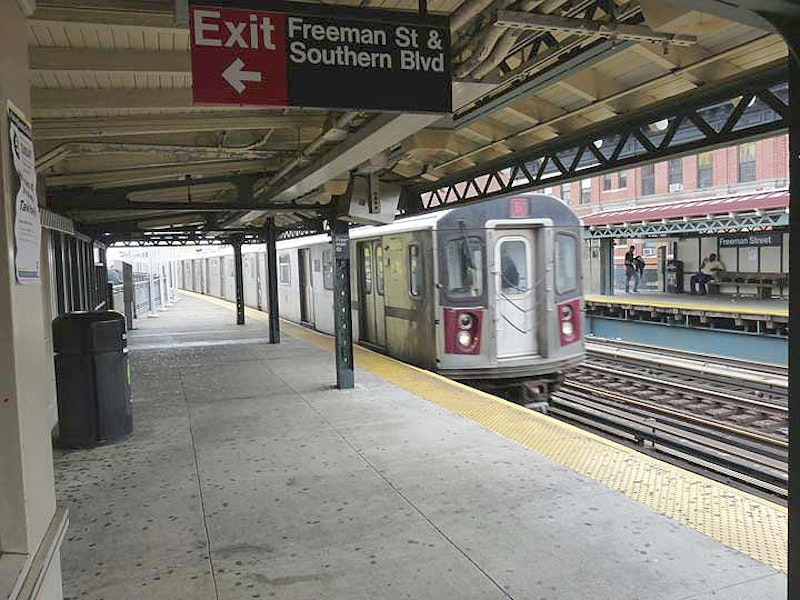 Remembering that I don’t write enough Bronx posts, I set off to parade around the near geographical center of the Bronx in the Crotona Park area.

Crotona Park, the neighborhood and the park, isn’t near the Croton Aqueduct, which runs through the western Bronx; it was named for a colony in ancient Greece famed for Olympic athletes. It was purchased from the estate belonging to Andrew Bathgate in the 1880s; a dispute with the Bathgate family prevented the new Crotona Park from being named for them. Bathgate Ave. today remembers these early Bronx gentry.

I grabbed the #5 train from Grand Central and rode to Freeman St. The mid-Bronx features the same numbered east-west streets as Manhattan, as if the Harlem River didn’t separate the two boroughs; the Bronx separated from Manhattan in 1898, and it became its own county in 1914. But the Bronx also has a large contingent of named east-west streets mixed among the numbers, such as Freeman, named for Dr. Norman Freeman, who taught at St. John’s College, now Fordham University, from 1845 to 1850.

The IRT el station at Freeman at Southern Blvd. was one of the first elevated uptown extensions of Interboro Rapid Transit, opening on November 26, 1904, just one month after the IRT subway opened between City Hall and 145th St. in Manhattan. It’s a northern extension of the Lenox Ave. IRT branch. 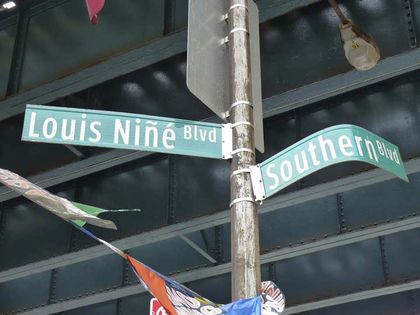 This new street sign leaves no possibility of error in the pronunciation of Louis Nine Blvd.: it’s Louis NEEN-yay, not “Louis 9.” The street was renamed from Wilkins Ave. soon after the 1983 death of Bronx assemblyman Nine. Louis IX, meanwhile, was a Crusading 13th Century French monarch and the only one made a saint by the Catholic Church. The era of total street renaming has come to an end, as streets get “sub-names” now on separate street signs, with the original name allowed to remain in place. 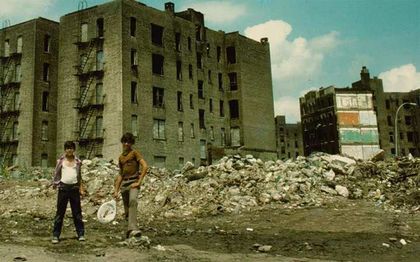 Charlotte St., a three-block thoroughfare running from Crotona Park East across Boston Rd. to Jennings St. and Minford Pl., was briefly the best-known, and most infamous, street in the Bronx in the late-1970s. The young Quaker lass named Charlotte Leggett would never know that by marrying into the prominent Fox landowning family in 1808, she would eventually have a short street in the immediate Crotona Park area named for her; apartment buildings housing middle-class workers would spring up; and that her street would decay and collapse into ruin before bouncing back to respectability.

The street became a microcosm of what happened to the South Bronx in the 1960s and 1970s when the high cost of illegal drugs caused many to commit crimes to pay for their habit. Merchants, many of whom had been in business for decades, and residents moved out to escape the onslaught. Landlords found it unprofitable to maintain their buildings when the junkies were trashing them.

President Jimmy Carter was in New York to attend a United Nations session October 5, 1977, but his real mission had been cloaked in secrecy to all but his closest aides. His motorcade roared on streets that have almost never seen visits by mayors, much less presidents: the Grand Concourse, East Tremont Ave., and 3rd Ave., whose El was so recently torn down; its burned-out buildings bore sheets of tin where the window glass used to be. The motorcade traveled down Claremont Parkway (see below), at one time a genteel carriage road between the Bathgate and Zborowski estates; through Crotona Park, whose grand appointments were now rubble-strewn; and on Boston Rd., conceived and built by Lewis Morris in the post-Revolutionary years as an alternative to the older Boston Post Rd.; and finally Charlotte St. A week after Carter’s visit the Yankees opposed the Los Angeles Dodgers in the World Series at Yankee Stadium. The nation saw for itself the Bronx’ plight when between innings, ABC-TV cameras panned around on the numerous blazes visible in the night. “The Bronx is burning,” intoned Howard Cosell. 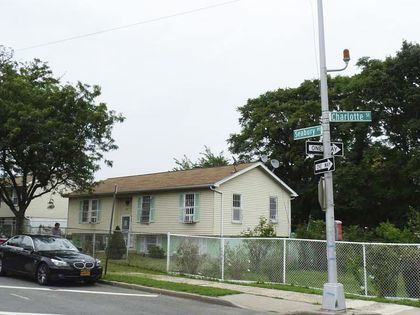 The south Bronx was slow to recover. The federal government promised only $55 million in the wake of Carter’s visit. In 1977, the crack and AIDS epidemics were yet to arrive. Drug overdoses and AIDS killed over 17,000 Bronxites between 1985 and 2000. But the seeds for Charlotte St.’s rebirth began to bear shoots in 1984, during the Reagan administration, when Charlotte Gardens, a community of ranch houses, was constructed where all the old tenements had burned down. Applicants who could prove need were able to purchase new $52,000 three-bedroom houses. Soon, additional new housing sprouted on the battered streets to the south and east.

The Crotona Park area remains an “urban frontier.” New housing and middle-class residents still battle the residue of the crime and drug plague left over from the last four decades of the 20th century. But the neighborhood is immeasurably improved from what it was a mere 30 years ago. 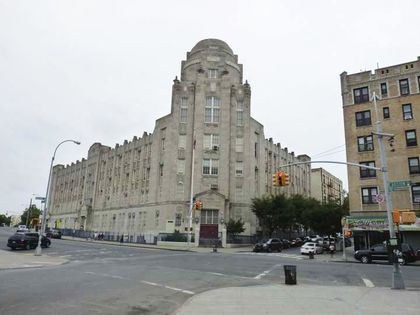 This is a junior high school? Intermediate School 98, Hermann Ridder Junior High, 1619 Boston Rd. at E. 173rd St., is a massive stone fortress built from 1929 to 1931 by architect Walter C. Martin in the then-new Art Deco style, which he melded into the Beaux Arts stylings of the previous decades. It has always been a junior high. When up close, look for sculptures of books and lamps of knowledge.

Its namesake (1851-1915) was a successful magazine and newspaper publisher; he ran into trouble at the start of WWI because of pro-German sentiment in the pages of one of his publications, New Yorker Staats-Zeitung; he also published The Journal of Commerce, which I recall from my days working at the Brooklyn Business Library between 1978 and 1981. The business was carried on by his son Victor Ridder; in 1974, Ridder Publications merged with Knight Newspapers to become Knight-Ridder, the second-largest newspaper publisher in the United States until its sale to the McClatchy Company in 2006. 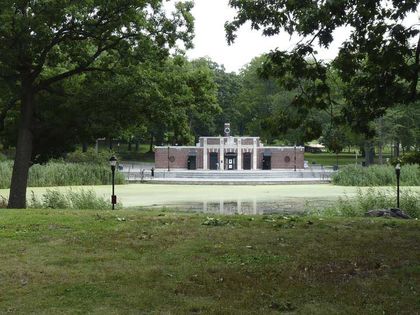 After the city took title to the Andrew Bathgate Estate in 1888 it converted some of the estate to parkland. The park, which became known as Crotona Park not from the aqueduct but from the aforementioned city in ancient Greece, eventually encompassed over 127 acres and had excellent views: the New Jersey palisades and the Brooklyn Bridge are visible from its heights in winter. On the grounds of the Bathgate estate there was a small pond, named by neighborhood children Indian Lake generations ago, with a brook that trailed off to the south, eventually entering the East River. The stream, now underground, follows the paths of Rev. James Polite Boulevard, Intervale Ave. and E. 149th St. to the river. Beginning in the 1930s, the Works Progress Administration and Parks Department head Robert Moses modernized Crotona, constructing a boathouse, baseball diamonds, tennis courts, handball courts, bathrooms, and a swimming pool and bathhouse. 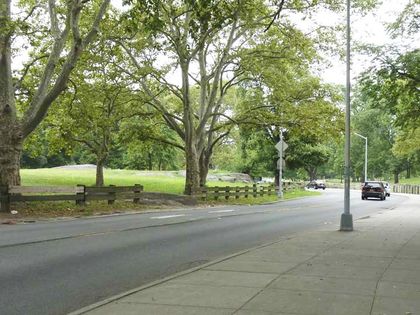 Claremont Parkway bisects the southern portion of Crotona Park and then runs west across a small neighborhood called Claremont Village to its namesake park at Webster Ave. Crotona Park and Claremont Park were formed out of the former preserves of the Bathgate and Zborowski de Montsaulain families, respectively. The Zborowskis acquired their lands from the Morris family, which owned much of the southern Bronx in the 18th and 19th centuries.

Claremont Parkway was originally a carriage road between the estates of the two families. The name of the road has changed from Bathgate Pl. (1850) to Wendover Pl. (1890, commemorating local Congressman Peter Wendover, and finally in 1913 to Claremont Parkway. 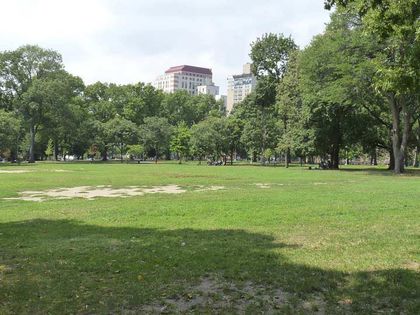 Elliott and Anna Zborowski de Montsaulain purchased the land that later became Claremont Park from the Morrises in 1858 and built a mansion Elliott named Claremont, or “clear mountain.” There is hilly ground in the park—it’s one of three mid-Bronx hills: Claremont, the now-leveled Fairmount, and Mount Eden—that are referred to by the name Tremont, which became the Bronx’s longest route, stretching from the Harlem River to Long Island Sound.

In 1888 the City of New York purchased the property and set about creating a public space, draining the park’s Black Swamp, building park paths and constructing playgrounds over the next three decades. The Clermont mansion became the seat of the Bronx Parks Department until it was razed in 1938.