BQ and Death mull over unfinished business in a vacant lot in Columbus, Ohio. 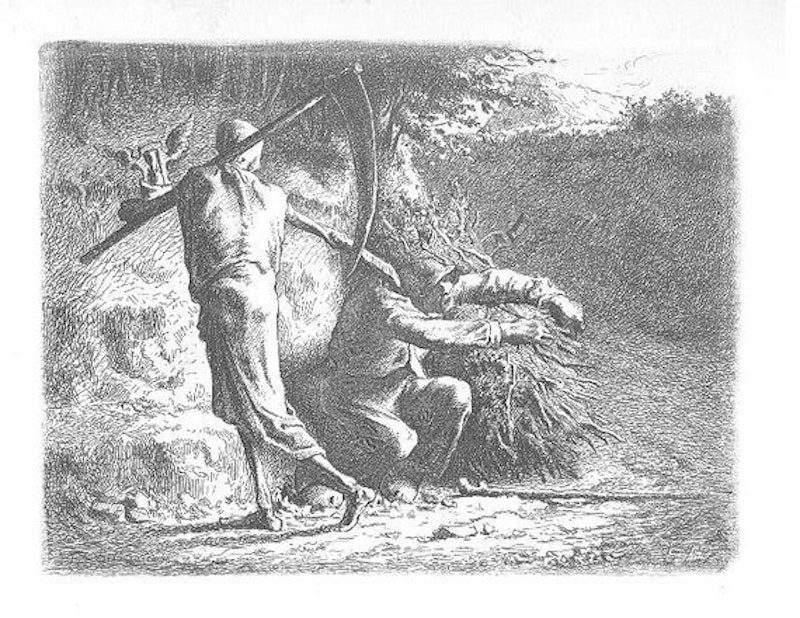 The author, Death, and a peasant sometime in the 1600s.

This is Part Six in a series, Bennington Unchained.

I’ve taken a detour: Columbus, Ohio. Not the most exciting town (technically it’s a city, but I couldn’t find any drugs or prostitutes, so I’m not sure exactly. Maybe it’s a village?), but I was only there for a day. I went to visit the razed site of the club that once was the Alrosa Villa. On December 8, 2004, Dimebag Darrell of Pantera and Damageplan, was shot in the back of the head as he was shredding. If I may be so insensitive, not a bad way to go out. No idea, you’re on stage rocking, and then the ultimate headbang comes, and you’re none the wiser. Smashing. The rest of his crew and some audience members weren’t so lucky and had to deal with a relatively early American mass shooting. In any case, I’m not here because I’m a true crime fan (those are called “white women”), nor any particular affection for the music of Pantera or Damageplan, though I do enjoy a few songs. I’m here to visit Death.

A detour was necessary because Death comes faster than you think. Like all criminals, he likes to return to the scene of his crimes and savor the pain he caused and the blood he spilled. “You look terrible,” he told me. Wow. Coming from this guy? I can’t really tell you what Death looks like, it’s hard to describe, but the stereotype is fairly close: bones, wind, cloaks. No scepters or other accessories, though. Pretty chic specter honestly. I told him I’d been on my own for some six weeks now and was hazard because I was living the life of a vagabond. He frowned, by which I mean he cut off the electricity at the nearest hospital for 10 minutes. “I don’t even know how many people that took out, but God, what a thrill.”

Invoking God? Again with this guy. I’ve never liked Death—I’ve had to deal with him in the past and it’s always a drag. Always early, never “on time,” sometimes absurdly and cruelly late. Do you know how long my Uncle Slippy was demented and hooked on heroin? Fifteen years. I begged Death to come and do his business, like a dog that has to “go to the bathroom.” He looked at me all cross, despite feeling fairly Zen after presiding over the Terri Schiavo affair. “You think I take house calls? Bennington, the only reason you know me is because I’m lonely, and I can’t relate to most people. You, you’re different. You’re built different, I don’t know. Frankly, you intimidate me. You don’t scare me, for Death comes for us all—except me, obviously…”

I always zone out when other people talk at me. Why torture yourself? Just listen to Bennington. Hasn’t this spring of freedom made the world a better place? There may be more bombs going off and more blood being spilled than ever, but hey—White Boy Summer! Hot Vox Summer! Let’s fuck and get nasty!

“Bennington, that was disgusting what you just thought. And the images… Good Lord…” Again with God with this guy. Doesn’t he kill people? “I have to go.” Oh, now he’s not lonely. Now he wants to go away and walk home alone on his own. Great. This always happens to me. Everyone abandons me. Everyone leaves me out to dry. Death is no exception. He’s not even ordering a Lyft! He’s hitchhiking! I won’t bother telling him no one does that anymore, that no one will pick him up. I hope Death gets hit by a truck.