It's not all bad. 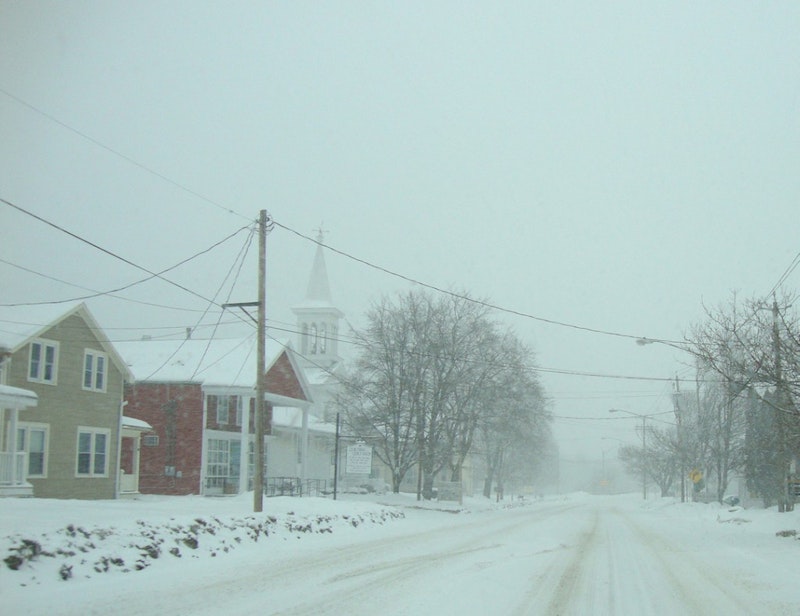 Visiting upstate New York should be more of a culture shock to me now than it is. But I haven't been living in New York City long enough to wipe out the part of me that is still accustomed to slow, unchanging country life, the part that let me survive the weekend I came home during Winter Storm Electra.

When I say “upstate,” I’m referring to western New York, where the Buffalo Bills roam—not “upstate” in the sense it takes on when a Manhattanite says it, my new neighbors somewhat limited in their perception of our state's boundaries. They have little imagination north of the Catskills. I was born in New York City, but raised in the upstate wilderness—an experience not unlike that of the protagonist in a fantasy novel, removed from a royal bloodline and raised as a carpenter's apprentice. Having claimed my metropolitan throne, I take infrequent trips back to the woods to visit my mother (who, as my actual mother rather than adoptive, throws something of a wrench into my metaphor).

Last weekend was one such occasion—an auspicious one, as I arrived in Rochester just in time to see my homeland beset by blizzards. Western New York knows its snow, and this was still a real bitch of a storm; lake-effect snow-mingled with frigid wind and plummeting temperatures to ice up country highways, paralyze towns, and kill cars outright. I was immediately trapped.

On my first full day back, my mother directed me to a worn copy-paper box from under her bed, which we sorted (these projects are often the excuse for visits). In it we found ephemera from when my parents occupied small apartments in New York City, the original royals—letters, flyers, zines, and lyrics, endless lyrics by my father, whose bands were always almost (but not quite) successful. I discovered that he had once attempted to write a song that began “Just got home, go to the fridge/Grab a beer and the telephone” and was to be titled “Bocks & Call.”) He'd always felt a little trapped in his own head, even in NYC; for him, the flight northwest had been liberating.

My sense of being snared was tempered with certainty that I would escape, eventually—much as I told myself every day of high school, only now there was more pleasure in the thought and less desperation. The short length of my visit (3.5 days) helped keep me in the moment; so did beer (sold at prices unheard of downstate). I lapsed back into that loping walk and slow cadence some of us develop when we grow up in a place where there's not much to do, but it wasn't so bad this time. Visits with old friends also added some warmth to the general climate, people I hadn't seen in months or years. These folks were more trapped than I; they'd moved out of their parents' houses, but still shared their ZIP code. Their speedometers were set much slower than mine out of necessity: if you go a mile a minute in our town, you'll burn out too quick.

I made it out again. The roads remained treacherous, but I got to the bus station thanks to a friend with four-wheel drive (a messianic invention to be sure, invented in Brookville, PA, a town not very different from my own Dansville). He had taken a trip to Europe for a theater festival earlier in the year; perhaps it was our combined momentum that allowed us to escape. But I admit that in the moment—sharing drinks with school chums, seeing pickup trucks slip and swerve in the insulating snow, discovering aged artifacts of my father—it was nice to almost get trapped at home once more.