The Secret of Neil Gaiman

Somehow he does only what he wants to do and he makes it work. 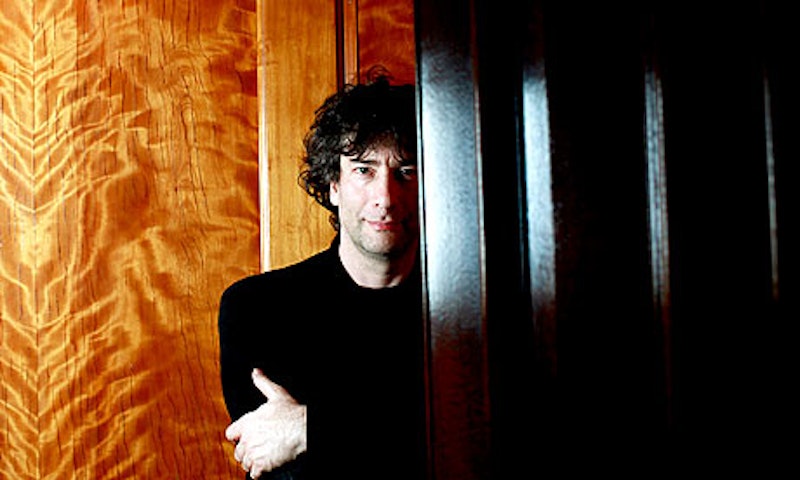 Neil Gaiman is one of the more interesting people now writing books. I don't care all that much for most of what he turns out, but there's no denying that he's a gifted man. One of his gifts, maybe the most important one, is tricky to pin down. But here we go.

A while back Gaiman appeared on a radio show called Wait Wait... Don't Tell Me! It's the kind of game show where the real point is for panel members to shoot out wisecracks. The panelists are drawn from a pool of regulars, most of whom are stand-up comics or specialists in sprightly journalism. Thrown in among them is a celebrity guest, and the guest just has to get by as best he or she can.

What is deluxe poise like when you see it in action? I caught a glimpse when the Gaiman segment was broadcast on BBC America, a TV channel. There was a moment when Gaiman was making a point to the host. Just then Paula Poundstone hurled a question Gaiman's way, a joke question but still one that called for an answer. He ignored her. The thing is, you couldn't tell he was ignoring her. They were near enough that he must have heard, but keep your eyes on him and he was just a man finishing a sentence.

In all other cases I've ever seen of one person shutting out another, the ignoring has been a physical act. You've seen this too. The profile goes rigid or the chin tips a half-inch over. Often enough the ignorer plays up the physical side of things, just to underline what a killing blow he or she has chosen to deliver. But even the people who aren't hams will signal what they're doing. They can't help it. Too many little muscles are involved, and getting the damn things to stay put requires an effort. Central command has to send out an alert and try locking them in place.

Then there's Gaiman. All those little muscles simply stayed put, as opposed to popping into action and then getting frozen. No lockdown, no involvement by central command. Believe it or not, there are movement therapies that teach people how to avoid the command-and-control approach to using their bodies. If you're curious, Google the Alexander Technique and the Feldenkrais Method. Maybe Gaiman has studied them, or maybe he's a natural and could invent one of his own. The most remarkable thing: he appears to lead his whole life according to this same principle; that of getting results without override.

I’ve known physically graceful people who would try to hammerlock various problems in their life, often with dreadful consequences. Gaiman doesn't do that. Take writing. Standard advice for beginning writers is to set aside a block of time each day and then glue yourself to your desk. During that time you trample down any non-writing impulses that pass through your head. Failure to glue and trample means failure to get anything done, and thus failure to be a writer. It's good advice, but the young Gaiman was lucky enough to be ready for something better. His approach, as he once described it for an interviewer, was to grab whatever spare moment he could. Each day was different, except that each day he wrote a great deal. He led his life, and doing so included writing.

The result was that he got his work done with a minimum of teeth gritting. There was some, of course, but it wasn't a necessary first step for getting himself to write. He was doing what he wanted to do, so he didn't have to clock in and out like a wage slave. Somebody else, at some time, must have taken this same approach and also made a go of it. But Gaiman is the only one I know about. Why him? I don't know, but it has something to do with that moment when he ignored Paula Poundstone.