The Night I Shoved a Homeless Man 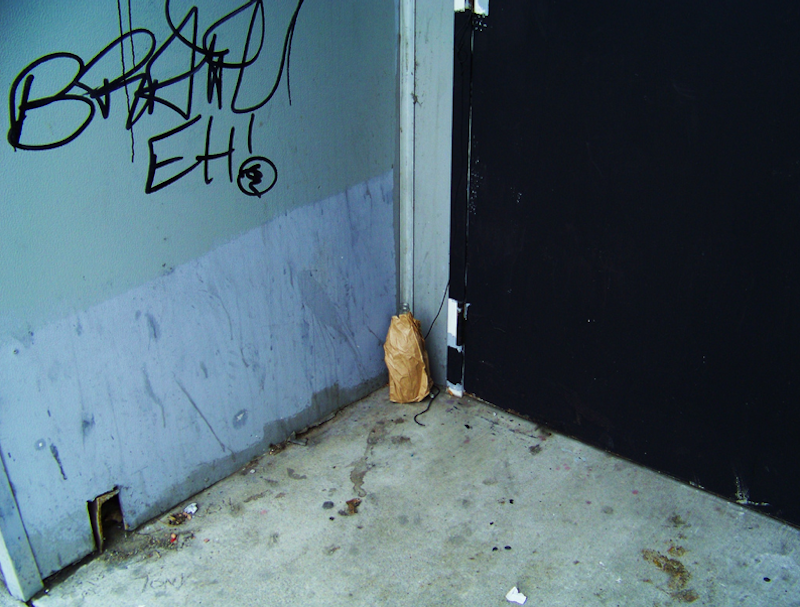 My pal the handyman may be on his last legs. He can't get around much, and he can scrape up money for his daily alcohol ration only because his landlord, an old buddy, allows him to live rent-free. The building is something of a dump, naturally, and the handyman's current apartment is no bigger than a kennel. He shares it with another pal, a homeless fellow named Gérard. “He comes for three days and he stays five months,” the handyman grumbles.

The two got along better when the landlord allowed the handyman a different apartment, still small but not minuscule. There the guys' mattresses were not right next to each other on the floor, and it was possible to walk without stepping over or through anything. You had to pick your spots, but it was possible. In the old apartment, Gérard's company seemed like a good deal for the handyman. Stretches of the apartment seemed tidy, and Gérard was on hand to lift and carry what needed it, such as groceries. He was cheerful the time I visited.

He's a few years younger than the handyman, almost as grizzled and even shorter, which means he's tiny. Unlike the handyman he has a full head of hair, and his skin is cherry red from exposure. He considers himself a poet and once recited for me a poem he'd written about yuppiedom (“Cell Your Soul”). We've never discussed why he lives on the street. Most days he sits out front of the big liquor store at the corner and panhandles. I used to stop by to chat for a few minutes and then he would tell me to beat it because I was ruining business.

Since they've moved to the kennel, I've visited the handyman and Gérard just a handful of times. Gérard prefers keeping the door locked, so a visit puts my hosts through a good deal of crashing and banging and inconvenience before I'm even inside. Then, when somebody has made it to the door and let me in, we have to wade our way through the clutter on the floor. Once we've made it to the living area, I find there's no place for me to plop down except one of the mattresses. These are as gray as their owners and not much cleaner.

If I do plop down, I have Gérard glaring at me. At least that's how it worked out on my first visit to the kennel. Gérard was not the friendly soul he used to be. He bitched at me about my shoes (too big for my feet, he said), about my conversation (too many apologies) and about my inability to understand him when he muttered (time to clean my fucking ears).

The handyman woke up and voiced preoccupations of his own. “Where is my beer?” he said, and he would’ve looked over the arms of his armchair if he could’ve hauled himself up. “Did one of you fucking assholes take my fucking beer?”

Every now and then I decide enough is enough. “I could say the same to you,” I told him. “Maybe you should calm down.”

Gérard subsided into whining. “I just don't like being called an asshole,” he said, and now he was looking at the TV. “I don't want to be called an asshole.” Looking back, I might have said that, okay, his secret was safe with me. But instead I gave him a cool “Uh huh” and let it go at that. We watched TV—A Clockwork Orange dubbed into French—and listened to the handyman thrash and stumble his way to the refrigerator and back to his chair.

“Man,” Gérard said brightly, “that Kubrick was fucked up. Hey, Cal, that man was fucked up, right? But, man, he was a genius.”I vouchsafed some minimal sign of agreement. The rest of my stay was like that. Gérard chattered at me and I gradually thawed out. My feelings had been hurt and I typically shrink away from anyone who rattles me, which Gérard had certainly done. But he had become so puppy-like that I knew I had to come unstuck and respond.

When I left, it was because the place was just too depressing. The air was solid with cigarette smoke, and the handyman was maundering about the hardship of his life. On the set Alec was saying, “Mais oui, je désire d'être bon. Oui, d'être bon, c'est tout.”

A few weeks passed. I paid another visit and this time Gérard wasn't there. The handyman and I talked, and I went home to write up the evening. After I sent in my post, I got word back from the editor: the name I'd given the handyman's brandy did not check out. I decided to get the real name.

The liquor store had closed by the time I got there, so once more I had to brave the handyman's apartment. This time Gérard answered the door. His face was redder than usual, and his hair, which is close to being snow white, was hanging down loose and flew back from his head. He goggled up at me, his eyes traveling quite a distance before they reached mine. “What do you want?” he said. He was angry.

“I'm just dropping by,” I said. In the distance the television played and the handyman was expounding some point in his usual fashion: at length and without consonants. If he had an audience, that meant somebody else was there and the room's capacity was at bursting point.

“Maybe you're not dropping by,” said Gérard the poet. “Maybe you're dropping out, out that door.” He squared his body so as to block mine. Of course he only came up to my sternum.

“Nah, come on, Gérard,” I said. I might have explained about checking the brandy label, but that's the thing about life when you're near the handyman. Everyone's too drunk and too noisy for ideas to be communicated.

“No, it is not fucking,” said Gérard, who evidently had misheard me. “You're fucking if you think you—”

I snapped. “Shut up, Gérard,” I said. “I'm tired of you.” I swiped him out of my path. Just my left hand, that was enough. I think his feet left the ground and he bounced against the wall. I knew I could manage him, or else I wouldn't have tried, but I hadn't guessed he was this light. He might have been a child.

I stormed past, head burning, and found the handyman in his armchair. A woman sat on one of the mattresses, a bottle of beer in one hand. Don't ask me who she was, but she had a bare midriff and seams in her face. It was surprising that her midriff looked as solid as it did; at the same time it had a good deal of sag.

“Hey, the bozo,” said the handyman, who had registered my presence. But by then I had caught sight of his brandy label (Chemineaud, it was Chemineaud) and my mission was done. “Yeah, hi,” I said, and stormed out again.

After a few days passed, I reflected on the situation. No, I don't think the beer bottle woman was going to get it on with either of the fellows. Gérard was just being a homeless guy protecting his turf. When you live among the garbage cans, you learn to snap and snarl as necessary. It's like being a dog.

I saw him again not too long ago. I was crossing the street and there he was at his spot outside the liquor store. I braced myself because I'm a sensitive soul. But he offered no harm. “Hi Cal,” he said brightly. “Hey Cal, this is some weather, huh? This is fucking cold weather. Hey Cal—” And so on. I said hi and continued on my way.

I guess that's the thing about life when there isn't enough space to go around. You see human nature down to the nub.