A Cozy Allegory in a Cozy Mystery 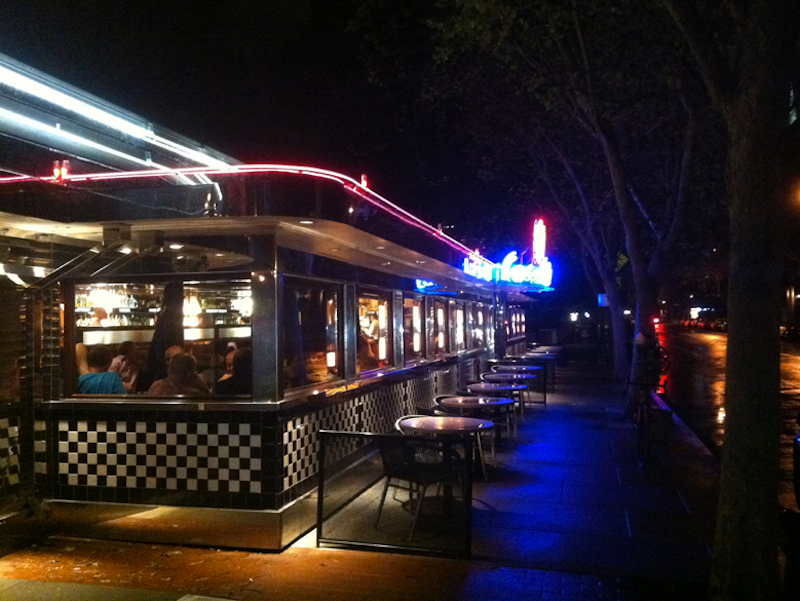 Once when interviewing Tim Hall—an underrated novelist and veteran of the underground press whose new mystery, Dead Stock, is one of the best books of 2013—he told me that he writes “feminism of the cock.”

That phrase is not only a statement of inspirational power for an American culture committed to a boring process of de-sexification, it’s also the most reliable road of access to the vitality, fun, and importance of Hall’s writing.

“Feminism of the cock” was Hall’s aggressive explanation of the truth that penetrates the intimacy, romance, and relations of straight men and women, regardless of the attempt of right and left Puritans to obstruct it with ideology. The masculine, virile, and horny man loves women, and women often love him back. The sexual writing of Hall’s early novels, Half Empty and Full Of It, is about mutual pleasure. Men and women find arousal and excitement in using each other, and getting off on each other in interchangeable roles of dominance. It’s also about how when it comes to precepts of feminism—equal opportunity for women, love for women—the heterosexual cock is a better advocate and exemplar than the theoretical mind.

Hall is an engineer. His writing takes seemingly detached and disparate ideas, people, and concepts, and through sheer will and force of imagination, connects them with grace, style, and for the readers, the joy of surprise. Dead Stock is the freshest example of his ability to transform loose structures and spare parts into bridgework. It’s the first in a series of mysteries about the unplanned adventures of a Long Island twentysomething whose “life resembles his surname”—Bert Shambles. Shambles lives in a cramped apartment next to a telephone psychic who dresses like a wizard, and he works at a thrift shop run by a Catholic Church with a priest who helped him escape criminal charges for an act of chivalry gone wrong (he assaulted a chump he thought assaulted his ex-girlfriend) with the sentence of probation.

Unable to find suitable employment, Shambles is a stand-in for millions of Americans in their 20s who struggle to navigate the new reality of their country’s culture of debt and closed door society. When Shambles breaks his routine of manning the thrift store and hanging out in a dive bar that doubles as a Laundromat—The Slosh N Wash—to pick up the vintage clothing of a newly deceased, retired professional golfer, he gets a glimpse into the other side of high finance, corrupt real estate deals, and golden putters that make for effective murder weapons. When the widow of the golf champion offers a reward for her beloved and dead husband’s missing putter, Shambles takes the case.

Little does Shambles know that the search for a golf club will put him on the trail of killers, into the arms of a mobster’s daughter, and on the run through the streets of Long Island in an effort to escape the rage of a van driving, red-haired maniac who might or might not have a conspiratorial connection to the murder of the golfer. Meanwhile, Shambles learns that his probation officer, Daddy-O, is sleeping with his ex-girlfriend, and he can’t help but wonder if they are plotting their own conspiracy to make his life even more messed up that it already is. Shambles’ only allies are his beautiful, new girlfriend, whose entire family wants him dead, a kindhearted Catholic priest, and Aku the Mystic, his bearded next-door neighbor dressed in a blue, star and moon decorated robe.

When reading Dead Stock, it’s difficult to determine what is bigger, Hall’s imagination, heart, or sense of humor. Shambles is an amazing character, because readers are able to love him, while they laugh at him. When he mistakenly takes the dead golfer’s vintage clothes home, and throws his own clothes in the garbage, he has no choice but to walk around his neighborhood wearing pink pants and a golf sweater. When a beautiful, buxom bartender brings him to consciousness after he loses a barroom brawl, he buries his nose in her cleavage, and then later says, “I’m sorry for smelling your boobs.”

Hall wrote Dead Stock in the first person, giving the reader the pleasure of living in Bert Shambles’ head. It doesn’t matter that he thinks Blaise Pascal is a living woman when he makes cracks like, “A hand like a bear paw gripped my arm. It felt like a nutcracker on a banana, and I don’t have to tell you who the banana was” or when he sets up a scene with this kind of description, “The house looked like a group of Las Vegas showgirls had hijacked an armored car and crashed into Liberace’s grave.”

In addition to solving crime and falling in love, Shambles is also able to act as the world’s oldest altar boy during a wedding, and execute the job of “page turner” for a piano player.

Through the oddest of circumstances, Shambles is able to transform into a hero perfect for America’s post-empire, pre-crash, perpetual recession age. He’s poor, but rich in character. He’s intellectually confused, but emotionally sincere and solid. He’s desperate, but honest, compassionate, and merciful to a fault. Shambles wouldn’t steal a briefcase full of cash from a blind corpse.

Shambles is simply looking to act as an agent of good in the world, while looking for love. To pull it off, he needs the help of his unlikely friends, the encouragement of a good woman, and more than a little luck. The dream of Dead Stock is not that good will always defeat evil, or that justice will always prevail, but that every person, even one as stumbling and bumbling as Bert, can make a heroic contribution to the eternal fight.

Dead Stock is a cozy. Cozies belong to a subgenre of the mystery in which sex and violence are downplayed or treated humorously, and the crime, suspense, and thrills all take place within one, small community. Cozies are all about fun, and Dead Stock presents loads of it, but it also presents the literary thrill of the spirit that transgresses the boundaries of entertainment into art. Like “feminism of the cock,” in his new mystery Hall is able to mediate peace among clashing concepts, and in doing so, provide instruction and guidance to the narrow-minded.

Much is made of the budget deficit in Washington D.C., and while it’s a serious and potentially dangerous problem, the more worrisome deficit in American life is the one of avidity. If there is one quality America should not possess, with all of its diversity, wealth, and individualism, it is boringness. With its dueling Puritans, its predictable pop culture, and its unimaginative politics, it’s becoming a collective bore—the pretentious and shallow guy that you try to avoid at the party due to an aversion to longwinded lectures, humorless scolds, and conversation by script.

In Dead Stock, Hall presents a hero of avidity in the war against creeping boredom. Bert Shambles, like his country, is lost, desperate, and unsure how to find room to breathe and space to move in a world that is closing in on him, but unlike his country, he is committed to doing everything with enthusiasm.

The traditional detective or crime solver is armed with steely toughness, physical prowess, and a sharp mind. Shambles, in all three areas, is under-equipped for his task. It’s through his force of energy, undying enthusiasm, and lust for life that he’s able to beat the bad guys and get the girl. Dead Stock is not only a cozy mystery. It is a cozy allegory.