Lampposts By the Letter

Only a few varieties of lampposts have managed to survive centuries in New York. 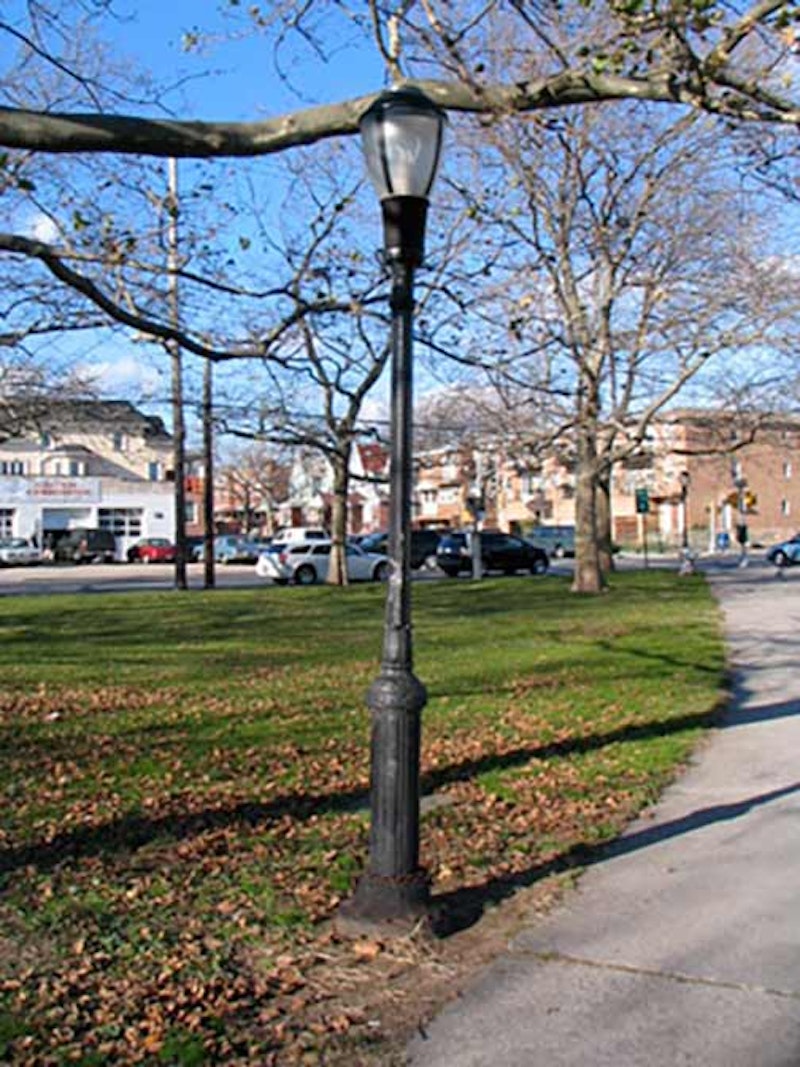 Paleontologists say that the legions of birds twittering in the trees, paddling in streams and migrating worldwide in the air are directly descended from the dinosaur line and are all that remains of the group of animals that brought the planet the marauding Tyrannosaurus Rex, plodding Brachiosaurus and brave Triceratops millions of years ago.

An analogy can be drawn here to one variety of NYC lamppost that fate has managed to preserve for nearly a century; and it will almost certainly continue to flourish for decades to come. It’s the mid-sized park post, technically Type B, that first appeared between 1910-1912 and has been standard issue ever since in NYC parks. It’s one of a group of NYC lampposts given letter designations. While thousands of Type Bs are still found, other letter posts have survived by just the dozens.

The Type B has a Beaux Arts pedigree. It was designed, as noted, somewhere in the 1910-1912 period expressly for New York City parks by architect Henry Bacon (1866-1924). Bacon began as a draftsman and quickly gained employment in what was one of the largest architectural firms at the turn of the 20th century, McKim, Mead and White. He went on to design the Lincoln Memorial in Washington, DC, the Danforth Memorial Library in Paterson, NJ, the Union Square Savings Bank in Manhattan, and many of the Wesleyan University campus buildings in Middletown, CT. The Special Collections and Archives department of Olin Library at Wesleyan is the repository of Bacon’s collection of books and papers.

For over 100 years, the Type B has been the workhorse of the NYC Parks Department (and its predecessors) for park pathway lighting. It can also be used for street lighting—most notably it turns up on W. 46th St. between 8th and 9th Aves. and Main St. in Port Washington in Nassau County. In the 1970s, Parks settled on this bland edition that the post still sports in most parks. In the 1990s, new luminaires (the Central Park and the Battery Park) produced by the Sentry Electric Co. appeared; they’re more handsome and a perfect complement to the post. 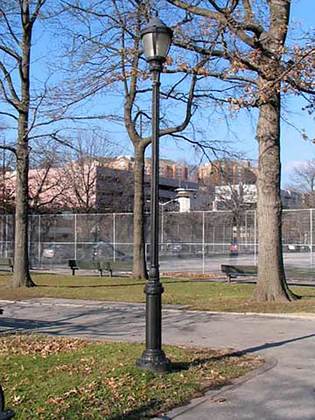 I’m not sure whether the Type A preceded or succeeded Type B, but both bear that classic Bacon design. The Type A shaft is taller by a few feet than the Type B. It’s found frequently around town, especially in parks, but never caught on as much as the Type B. The B has another variation I’ll mention later. 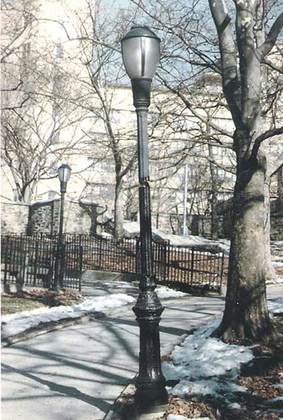 The Type C is the odd duck among the “letter” lampposts—while the shaft is much the same as A and B, its base is different: I’m not sure it’s a Bacon design. The post pops up on infrequent occasions around town. There are a pair in High Bridge Park at Laurel Hill Terrace and W. 187th St. in the Fort George area near Yeshiva University, a pair at India House facing Hanover Square downtown and a couple of lawns on Rugby Rd. near Cortelyou Rd. in Beverly Square, Brooklyn. 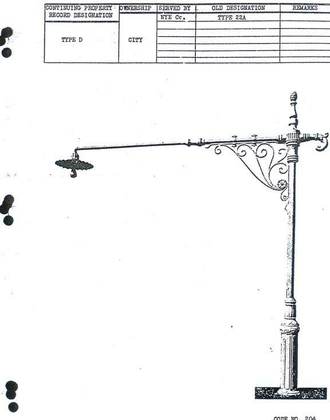 The Type D was somewhat bizarre, with the 11-foot height of the Type B park post, but a lengthy mast arm with a scroll reminiscent of the existing boulevard cast iron longarm post, which had several variants. The odd design gave it few opportunities to shine, apparently, and while it served some terms in parks perched on walls where it couldn’t be waylaid by truck traffic, it was quickly phased out there, as well. I’ve seen no extant examples or remnants anywhere. 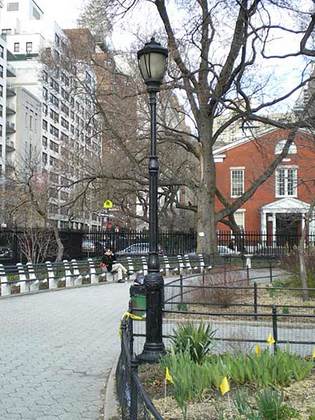 There’s a more Henry Bacon-ish profile with the Type E post, which first began appearing in NYC streets in 1913 and was installed into the 1940s. It’s about 13.5 feet high, about the same size as the Type A, but the difference is that the fluted shaft ends about halfway up the post and continues as a plain pipe to the apex. The two sections are separated by ornamentation echoing that at the top of the base.

There are a few dozen Type E’s scattered around the city, including a dozen in Stuyvesant Square Park on 2nd Ave. between E. 15th and 17th Sts. There are three in Cadman Plaza in downtown Brooklyn, five in Fort Greene Park, 25 in Silver Lake Park and 41 in Clove Lake Park, Staten Island, the step street at W. 161st St. and Sedgwick Ave., High Bridge, Bronx; one in Hero Park, Staten Island (on Victory Blvd. near Silver Lake Park), and one in Kelly Playground, Eastern Parkway Extension and Fulton St. in Bedford-Stuyvesant. The 12 at Mullaly Park in the Bronx were likely wiped out by construction of the new Yankee Stadium over a decade ago. 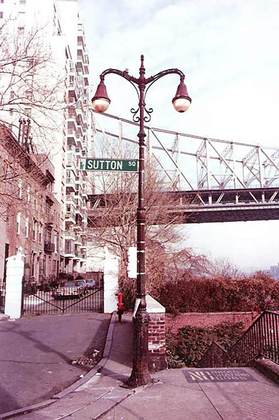 The Type F and its variants, introduced in the early-1910s, is the passenger pigeon of NYC lampposts—once they were ubiquitous on city side streets and some avenues, but in the 1950s there was a program to slay them, and most original Type Fs have vanished except for a few select areas. But a revival has begun. According to The New York Times’ late great Christopher Gray they were reportedly designed in the 1910s by Charles F. Lacombe, at the time the city’s chief engineer for light and power (he has an avenue in Soundview, the Bronx, named for him).

Type F had many variants—there was the 11-foot tall model which held down the Manhattan side street franchise for decades, and a boulevard version which was a foot taller and was on avenues, including 7th. There was also a hybrid Type EF, a Type E with the F-style reverse scroll mast arm welded at the top, and a number of knockoffs that appeared on step streets and pedestrian bridges; all of those have vanished. The one shown here was a rare Twin version that held down the east end of E. 58th St. at the East River until about 2000. 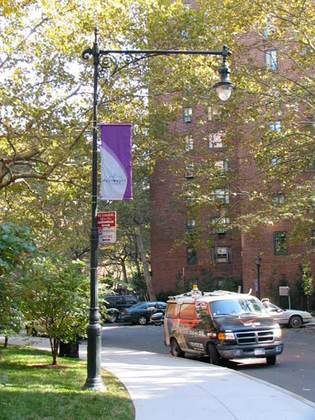 The Type G, 20 feet in height, and its successor, Type G3, 22′, were equally at home in public parks, side streets and some important roads. In many ways they resembled the somewhat more massive Corvington boulevard posts, though they had different metal scrollwork and the bases were of the Henry Baconesque style that Types A, B, D, E and F all used.

There are still a few Type G’s left, but their main bastion nowadays—almost 40—is in Stuyvesant Town and Peter Cooper Village on the far east side, where a flock still light the roads. They’ve gone through a number of luminaires—from the 1970s through the late-1990s, they employed the late, unlamented Unidor 400 sodium fixtures.