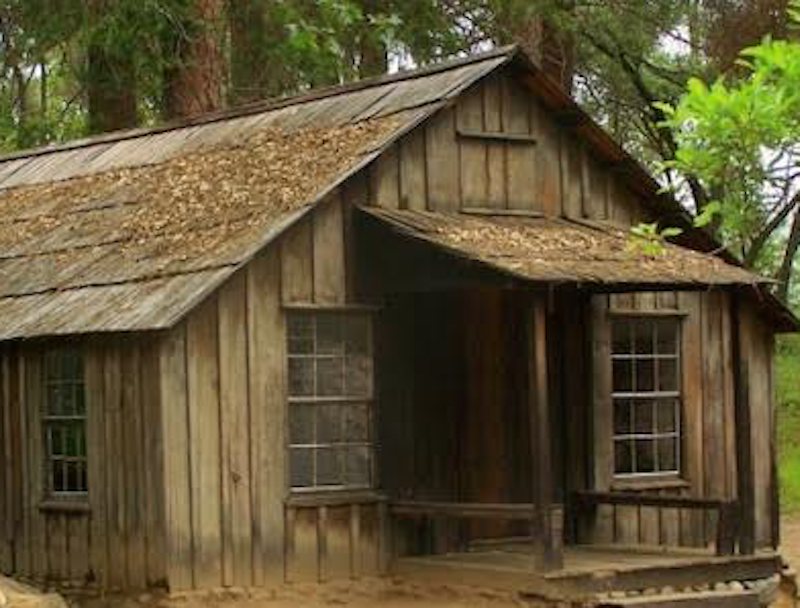 Barefoot, Becky stood on the porch of the old two-story clapboard farmhouse, her palms on the chalky railing. A black Cadillac approached, down the dirt road, slowing, crunching into her gravel drive. A tall man with a mustache, in a charcoal suit, stepped out. He moseyed over and drawled, "'Scuse me ma'am, I'm from the bank..."

"Stop right there, boy." Becky, cucumber cool, reached over, picked up a Winchester lever-action and fired a single round into the man's heart, killing him in a blink. She set the rifle aside, its barrel smoking, walked over to the Caddy, opened a rear door and, with some effort, managed to get the corpse inside, its gray eyes staring to infinity.

Driving the car to Lake Hinckley, to a far corner with a hill that sloped to black waters, she hopped out after slipping it into neutral, and let the mass roll into the lake. Arms akimbo, she watched it gurgle and sink. Becky smiled. She didn't like bankers, no how, no way. Varmints!

A gust swept ash-blonde locks from her shoulders.

Up above, on a piney crag, a black bear looked down as Becky walked home. He trotted along a deer path leading below. He liked her scent.

Dash set the paperback on his nightstand and turned out the light. He wasn't terribly tired, but it was late and tomorrow was his wedding day. Sleep, or some sort of rest was in order. If nothing else Dash placed a premium on order.

Tracey, Lacey and Trixie swapped cars outside a northern California hamlet and continued south in a Fairlane. Around noon, Trixie hopped out in Latch, a small town north of Monterey. Latch beckoned her, seemed to be a good place to blend in. Maybe better to hide from the law in this remote corner than a big city crawling with cops? Hard to reckon. She'd never been on the lam until recently.

The girls divided the glove compartment loot, giving Trixie almost a grand, enough, certainly, to rent a place, lie low for a spell. The last she saw of the twins, they were waving good-bye, barreling down the blacktop. "Crazy girls," Trixie laughed to herself. "Never met anyone quite like those twins! Double trouble!"

She sauntered along Main Street, kicked a stone to the gutter, whistled a tuneless tune, until she came to Meg's Thrift Shoppe. Entering, a bell rang overhead. At the cash register, Meg, in cat-eye glasses, reading Stanyon Street and Other Sorrows, looked up to smile hello, then back, intently, to Rod. Trixie found a brunette wig, a few outfits, reasonably current and stylish, a couple of romance paperbacks and a pair of penny loafers. Back on the street she adjusted the wig, stepped into the shoes, tossed the Krishna-issue flip-flops in the nearest trash can. "Good riddance to bad rubbish!" Exploring the tiny town she found a rundown shack for rent on the outskirts, paid cash for a month. After a shower and before getting dressed, on the bed, Trixie gazed out the open window and daydreamed. A gentle breeze stirred the musty air. She felt so relaxed that she dozed for a bit after thinking back to a simpler time, not even a year ago. She thought of Lane Kimble. He'd been a pain, and he probably killed Hoke, even if accidentally. But, in reflection, their life wasn't so bad—despite his car fixation. He loved that car more than he could ever love me! Men!

Feeling refreshed, she dressed in a smart beige pantsuit she'd just bought, and headed back to town to purchase drugstore items and a late lunch at the Rexall's counter. She was starving! A hamburger deluxe and a chocolate shake, topped off with apple pie and coffee remedied that. On the second cup, she stared out the plate glass window and watched the world roll by, seemingly in slow motion. She felt like That Girl dropped into Hooterville. Normally there weren't an abundance of profound thoughts cluttering Trixie's brainwaves. Right now there were none, just a wordless bliss, a hum.

After leaving a generous tip, Trixie bought a pack of Salems, lit one and went for a walk to see what little there was to see in dusty Latch. Not much besides two churches, a bar, a few dozen houses in various stages of repair, a scattering of shops, a small yellow-brick library, the WPA-era post office.

At Severin's Bakery she stopped in and bought a half-dozen devil's food cupcakes, a bedtime snack and breakfast. Tomorrow she'd do some real grocery shopping.

Trixie's shack wasn't much, just one room with an iron bed, an oak dresser, a card table and straight back chair. A counter at the back proffered a sink, a hot plate, a toaster, a Mr. Coffee. In one rear corner, a Lucy-Desi era fridge; in the other corner, a bathroom with a cheap shower stall.

Before trudging home, weary after all the day's changes, Trixie went to the post office to inquire about a letter box. She liked Latch, decided it'd be a good place to settle. Rest for a week, then look for a job and a nice apartment. Glancing at a wall, she noticed FBI Wanted posters. Taking a closer look she was astounded to see a pencil portrait of herself staring back at her. Oh no! She exited hastily, looking down, clutching the bag of cupcakes to her bosom, and made a beeline for her hovel, not knowing what else to do. As she approached the shack Trixie sensed someone tailing her. She looked over her shoulder to see a man closing in. Flustered, she fumbled getting the key in the lock. "Here, allow me," the tall handsome man said, his voice deep and commanding. In one deft move he swept the key from her sweaty fingers, into the slot, pushed open the door, pocketed the key, guided her in, his palm on the small of her back. In his other hand, suddenly, was a switchblade. He door closed behind them, clicked the knife open and said, "Strip."

Morning! Dash was awake and nervous, but in a good way. His wedding day! Tonight he and Mill would sleep together for the first time! Man and wife! He sat down on the edge of his bed, looked up to the high ceiling, then out the window, a sunny day singing with bold promise. It was almost too much to take in. From their chance meeting, to their fateful reencounter, to the whirlwind romance that seemed written, blazed, in the stars. They would grow old together, have children, many children, raise them in the Victorian across the street. Dressed in his best blue suit, Dash bounded from the boarding house, down the creaky front porch steps into a moist June morning's warmth, and practically trotted to the church a block or two away, an hour before the service scheduled for 11:00. At the church, Dash found Reverend Finster and chatted as people began to arrive. People, but as 11:00 loomed, no Millicent. Handyman Bill volunteered to run over and hurry her along, but returned sweaty, confused, distressed. He pulled Dash aside and said, "I don't know how to say this, so I'll just say it. When I came to the house I noticed the front door ajar. I thought it odd, but no more than that. I went up the steps, knocked on the jamb, called out for Mill, but got no answer. So I went in and yelled. Still, no answer. So I hollered. No reply. So I went upstairs. No sign of her Dash. Here, sit down."

After noon, the police were called in. A thorough search of the house and premises was made, but there was no sign of foul play. Everything in the stately Victorian was exactly as it would’ve been if Millicent had simply vanished into thin air. Her purse was sitting atop her dresser, cash and cards still in it. Except for her wedding dress and shoes, her clothes and possessions were accounted for.

Trixie did as the man commanded. Even if he didn't have a knife there was just something about him. She couldn't resist. The mongoose, the cobra.

"Okay, toss your clothes over there," he gestured with the blade. "Now take all the bedding, including pillows, and toss them on the pile. Good girl. Now the shower curtain and towels." She obeyed like a zombie. "Very good. Good little girl." He gathered everything and tossed it out the door. "Okay. I know who you are. You're wanted for murder. And you're going to be my prisoner, a butterfly in a spider's web. Not a glorious monarch, but you'll do. Good enough. Naked as a jaybird you can't go nowhere. And even if you did go to the cops, they'd nail you for murder once they did the bittiest bit of paperwork." He pulled the chair over, straddled it in front of Trixie. "Turn around for me. Slow, real slow. Lemme see what you've got."

As she turned, the brute slapped her behind, chortled, stood, knocking the chair aside. He ordered, "On the mattress with you. Let's get started, you little witch," while unbuckling his belt. Trixie responded, quickly. She was mortified to admit it, but she was falling in love with this cruel stranger. He's so handsome! Her senses raced up a steep summit, hit an acme previously untouched. She flashed on a poem read in junior college that'd puzzled her. Now she understood.

At midnight, ineffably despondent, ineffably lost, Dashwood Bryant sat, alone, on the edge of the bed in his rented room and stared blindly at the tattered rug.