The Great Demon Kings is testament to Giorno’s life. 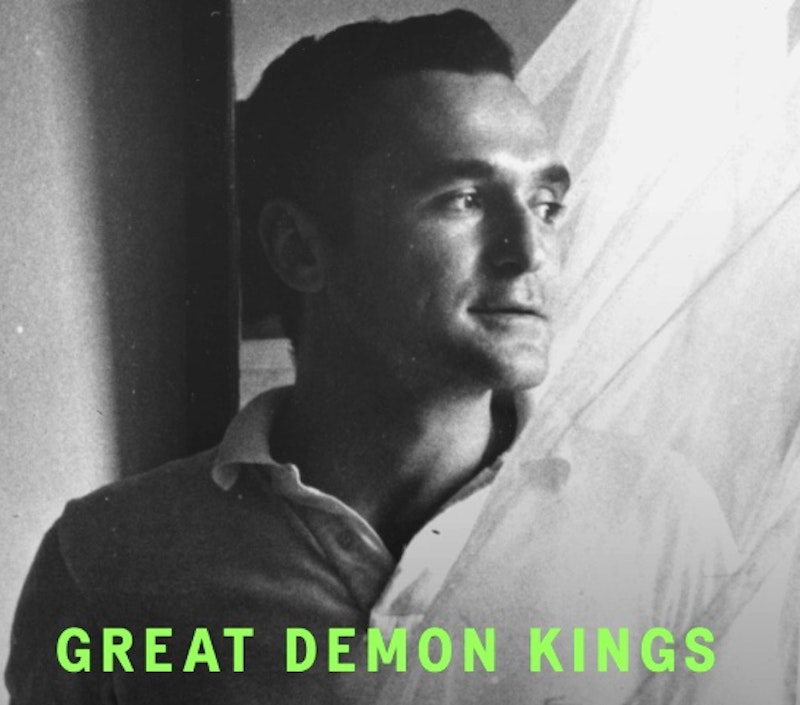 John Giorno was the eternal portrait of a poetic soul. Giorno was always introduced as the young poet by his famous, and not-so-famous, friends and lovers. Giorno, a singular pioneer of sound and vision wordplay, shaker-and-mover, driven by fame-suckers, star-fuckers, and shameless name-droppers. Giorno wasn’t so much a gay poet as he was a poet who happened to be gay. He wouldn’t play well in Florida today. It’s been a few years since the publication of Great Demon Kings, completed only days before his death in 2019. Transforming traditional poetry, beyond the written page, into the digital age. While kow-towing to his emotional insecurities and idiosyncratic obsessions of celebrity, artists and poets alike. A sensitive guy with a tough armor.

Giorno pursued superstar immortality, like an addiction, along with all the ill-fated trappings. The overwhelming desire to become the center of attention, adept at hobnobbing with the best social climbers. Hoping for the status of becoming the Marilyn Monroe of the art world. As if celebrity wasn’t enough, Giorno, invented new avenues of exploration by presenting the spoken word for public consumption, and entertainment in modern times. Exploiting the consumer-driven art scene, of rank and status, like Warhol. Under the auspices of Giorno Poetry Systems, bringing poetry to the new-age agenda. Formulating the business of words to new plateaus, early in his colorful career, becoming Warhol’s muse, and not-so-private lover, achieving goals on many levels, taking the business of poetics to new heights.

The shining star, in his first Warhol movie role, Sleep, a continuous film of non-stop Giorno, in close-ups, sleeping, six hours straight. Other films followed, the celebrated, Headshot series, a screen-test movie, extreme close-up and personal portraits, slowly turning 360 degrees, circling frontal, to both sides, and back around again. The first video selfies. Another example is the infamous film Blow Job. Later retitled Hand Job, it included clips, short snatches of Giorno’s dick, both erect, and flaccid, with, and without a condom. He affectionately called it Scumbag. There were other films to follow, but Sleep put him on the art radar map.

He launched Giorno Poetry Systems in 1965. Working with Electronic Sensory poetry environments using lights, sounds, and spoken poetry. Expanding on Robert Moog’s light organ, inventor of the synthesized keyboard instrument. This experimental collaboration of sound and light was a precursor that ushered the advent of disco light shows, using syncopated music, film projections, strobe, and ultraviolet black light applications. It influenced the big light shows that psychedelic rock bands used as trippy backdrops to live music performances. During that period in the 1960s, many historic, breakthrough events occurred. With the synergy of electricity and electronics, all that lights, camera, action stuff, as rudimentary as sound and film, the driving force behind performance art, music, movies, and live poetry settings in real time.

Along with legends like Marcel Duchamp, Dada’s darling, John Cage, and rock bands who took advantage of the technology for live shows in downtown clubs, loft parties, and gallery art scenes. The Velvet Underground is one example of rock music groups using multimedia techniques to enhance live performance. The Grateful Dead used this visual medium in tandem with psychedelic imagery. It was groundbreaking, experimental forays incorporated by Warhol, Giorno, and their contemporaries, eventually leading to the advent of music video formats like MTV and YouTube. There’s a direct connection from the early experiments by artists like John Giorno to today’s mass media technology.

1969 was a pivotal time in the cultural upheaval of art, freedom of expression and ultimate revolution. Dial-A-Poem was conceived and premiered at the apex of this modern renaissance of technological change. Searching for fresh avenues to explore, Giorno’s Dial-A-Poem concept was monumental. A simple idea that later gave birth to an entire industry of 800-number services for everything imaginable. His concept was presenting pre-recorded poems that one could access anytime by dialing a phone number. The poems changed regularly, highlighting a fresh, dazzling array the best poets of the day. Dial-A-Poem still exists, you can call too.

The Great Demon Kings is testament to Giorno’s life. Through a poet's vision, wandering in a state of confused euphoria to enlightenment. A simultaneous repulsion and attraction to life’s mad spectacle. The innocent bystander, watching a building on fire. A voyeur in a forbidden zone. Some artful, Peeping Tom pervert, sneaking into the realms of homoerotic sexual power, under the influence of art. Cruising men's public restrooms for a quickie with a stranger. Great minds, peering through the shabby veil of smug reality, while getting it on with each other like sexually-charged ancient gods, humping, a penchant for beautiful creatures of pure sex, sometimes verging on S & M acts.

Warhol, his first love, was followed by Robert Rauschenberg, Jasper Johns, Brion Gysin, and later, William Burroughs. Some were greater than others, but all equal in naked truth. Giorno wrestled with difficulties until finding peace in devout Buddhist practice, traveling to India on his spiritual quest. A path many sought, but few followed.