The many Jeromes of New York. 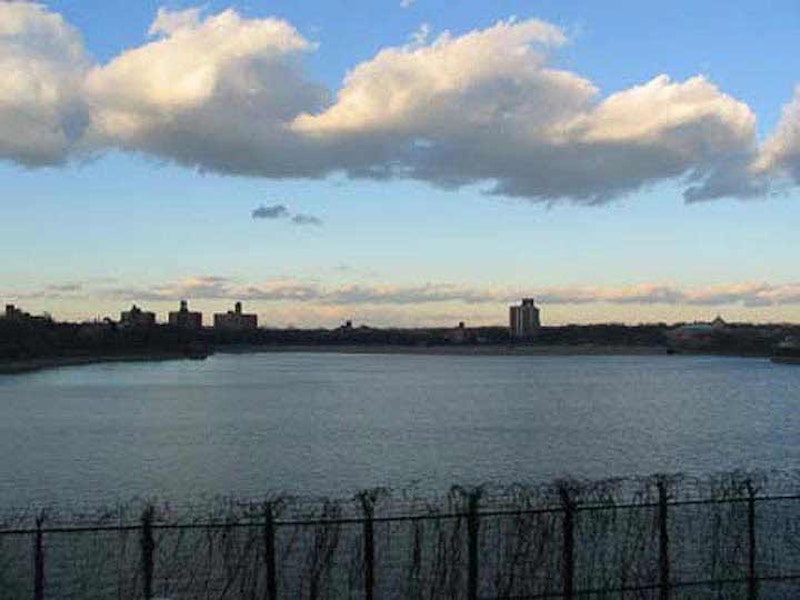 Do the Jerome Avenues in the Bronx and Brooklyn have anything to do with each other? The Bronx Jerome Ave. runs for miles from the Major Deegan Expressway at Macombs Dam Bridge north, past Yankee Stadium where it meets the Deegan again, at E. 233rd and the junction of Van Cortland Park and Woodlawn Cemetery. For much of its route it’s shadowed by the Woodlawn El, the #4 train. When western Bronx joined New York County in the 1800s, it was chosen to be the dividing line between East and West numbered streets, a duty fulfilled by 5th Ave. in Manhattan (and Broadway, south of 5th Ave.). Meanwhile, Jerome Ave. in Brooklyn is a short trickle of a road, emanating from Sheepshead Bay Rd. and running a few blocks northeast until it meets Ave. Z.

I wouldn’t bring it up if the two roads weren’t closely related. Both are named for Leonard Jerome (1817-1891), wealthy financier and horse racing enthusiast. Jerome was born in upstate Onondaga County and after graduating from Princeton, became a successful stock speculator, investing in railroads in which Commodore Cornelius Vanderbilt was a partner. For a time he resided in Brooklyn, but then built the Jerome Mansion at Madison Ave. and E. 26th St., which stood until 1967.

In 1866 Jerome purchased the estate of James Bathgate north of Fordham. He took on a partner, August Belmont Sr., and built the Jerome Park Racetrack, at which the first Belmont Stakes prize race was held in 1867. Jerome then financed a plank road for $375,000 that ran from the already existing Macombs Dam Bridge to the track. The tree-lined boulevard was named Central Ave. and then Murphy Ave., but the story goes that Jerome’s wife, Clarissa, demanded that the name be changed to Jerome Ave. and had several bronze signs with “Jerome Avenue” installed along the boulevard’s length. Eventually the city capitulated.

After the Belmont had relocated to Nassau County, the Jerome Park Racetrack shut down in 1894, was demolished and its replacement reservoir, shown above, still carries the Jerome name. 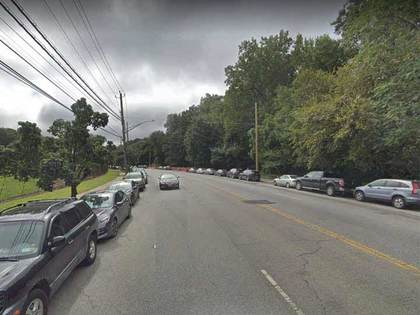 Jerome Ave., when originally constructed, was a wide, tree-lined boulevard. This northern stretch, running between Woodlawn Cemetery and Van Cortlandt Park, gives you an idea what it may have looked like originally. Its demeanor changed when the el began to clang and bang overhead in the 1910s, and the road became a commercial strip. Its claim to respectability continues to be its status as the divider between East and West Bronx numbered streets, but even that leaves several streets with a very short western section and a lengthy eastern. 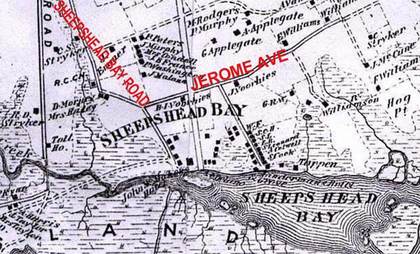 In Sheepshead Bay, Jerome Ave. was originally an unnamed road between farms, later called Voorhies Lane, but after the Sheepshead Bay Racetrack, aka the Coney Island Jockey Club and Race Course, was constructed in the early-1880s, the road took the name of one of its most prominent backers, Leonard Jerome. Jerome Ave. then formed the southern end of the racetrack. In 1910 betting on the ponies was outlawed in New York (it was legalized again later) and all three area racetracks closed; housing and streets were laid out and no trace of them remains today, except for Jerome Ave. Leonard Jerome became the grandfather of one of Britain’s pre-eminent statesmen after his daughter, Jeannette “Jenny” Jerome married Britain’s Lord Randolph Churchill; one of their two children was Prime Minister Winston Churchill.

Jennie Jerome, who was born at a Jerome residence at 197 Amity St. in Cobble Hill, Brooklyn, worked as a magazine editor in an age when few “respectable” women worked, and had a tattoo of a snake around her left wrist, decades before it became fashionable for women to acquire them. There are persistent rumors that she had some Iroquois blood, but no Native-American ancestry has been found. 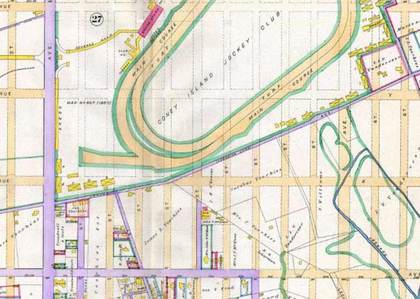 This 1890 Kings County map excerpt shows Jerome Ave. as the diagonal line south of the Coney Island Jockey Club. Since paved roads were shown in purple, Jerome Ave. was an important route in its early days. 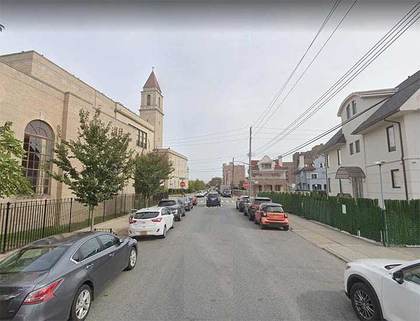 Here’s Jerome Ave. looking northeast from E. 18th St. today. Leonard Jerome is also remembered by a mausoleum in Brooklyn’s Green-Wood Cemetery. He was originally interred at Kensal Green Cemetery in Brighton, England, where he died, but his remains were later moved to Green-Wood. 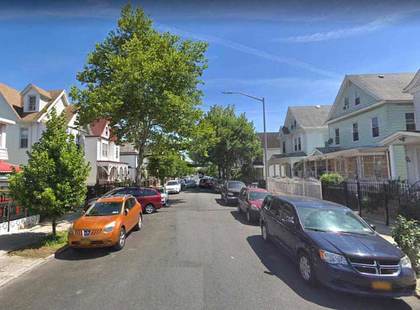 Jerome St. in East New York, Brooklyn, is also listed by Leonard Benardo and Jennifer Weiss in the reliable book Brooklyn By Name as having been named for Leonard Jerome. I’m not sure. There were no racetracks funded by Jerome in East New York, but the Union Course, which Jerome was not associated with, was a couple of miles to the east in Woodhaven.