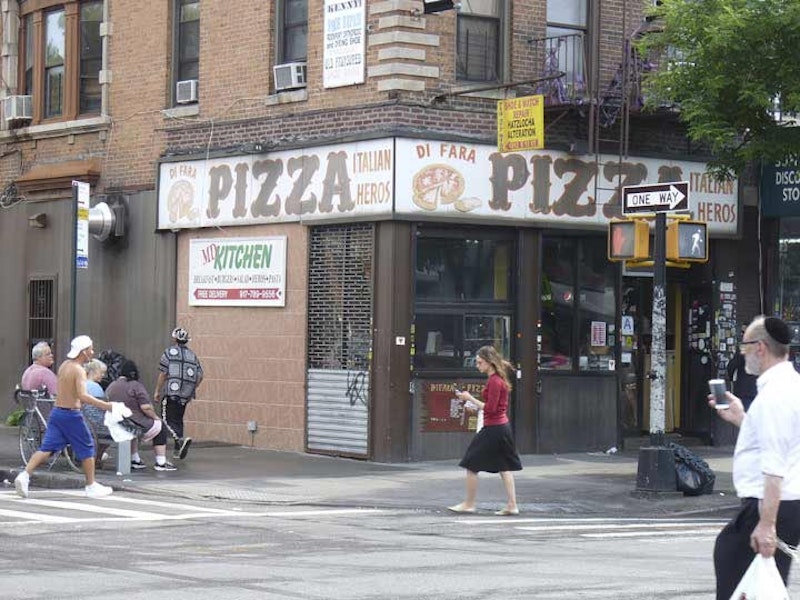 When I was a kid, I didn’t carry a camera everywhere I went, though I wish I had. I’ve ridden a bicycle since age seven, and a tricycle before that. Initially, I confined myself to the streets of my native Bay Ridge as well as the Belt Parkway bicycle path that ran from the 69th St. ferry pier as far as Bay Parkway, where there was an E.J. Korvettes shopping center in the 1970s.

One day in 1968, when I was 11, I followed my nose south out of Bay Ridge, through Bensonhurst and into the Coney Island area. I found another instance of vanishing infrastructure that would stick with me and lead to my website Forgotten New York, and two published books and counting. North of Neptune Ave., between Shell Rd. (when built in the colonial era it was paved with them) and W. 6th St. was a short street called Triton Ave. that the city was eliminating in favor of a condominium. On the street was a cast iron lamppost that was also on the way to its demise. The elevated station facing Triton Ave. was named Van Siclen, which made no sense: I knew from my perusal of Brooklyn maps that neither Van Siclen St. or Ave. was anywhere nearby. I later discovered that Van Siclen was the name of a hotel that had vanished several decades previously; the station name had never been changed (it’s now called Neptune Ave.).

I began bicycling more earnestly around 1974, the summer I turned 17. There was no part of Brooklyn left unplumbed, even tougher neighborhoods like Bedford-Stuyvesant and Brownsville; though “friendlier” areas like Bensonhurst, Greenpoint, Marine Park beckoned more frequently. I also forayed further out into Queens, reaching Alley Park in Bayside by 1981 (I remember it was that year because “Bette Davis Eyes” played in my head during that ride.) I’d ride straight across Brooklyn, through Flatbush, Midwood and Canarsie: the latter neighborhood was my portal to Queens areas like Woodhaven, Ozone Park and Howard Beach, as its south end was full of relatively unpopulated warehouse and industry that I could safely traverse. On rare occasions, I continued east into Nassau County to Valley Stream. I was younger and stronger and could make that round trip in about five hours, that long because I heeded stoplights.

The 1970s was an era before bicycling was considered a righteous activity and politicized. Today’s cyclists demand—and often receive—“street rights” denied both cars and pedestrians. Because vehicles can travel at much greater speeds, bicyclists often run red lights, go the wrong way on one-way streets, and cut in front of pedestrians, claiming that right because of their smaller vehicles. Bicyclists refer to walkers on the Brooklyn Bridge as “clueless” tourists, who they consider picture-taking idlers, not people who have important business and are keeping fit at the same time by bicycling the bridge’s narrow path.

Dwayne “The Rock” Johnson in his wrestling days used the phrase “know your role” when speaking to people who were way beneath him in talent and ability (in his opinion). It was shtick, but there’s a kernel of truth. When bicycling, I know my role: I defer to automobiles because the roads were built for them and they’re much larger than me and can inflict damage; and I also give a wide berth to pedestrians, who I identify with because they’re likely to be injured if I hit them. I obey red lights, cheating only if nothing at all on wheels or on foot is approaching. Thus I deferred my way through the streets of Brooklyn and Queens on a bike and can say that I’ve never had an accident in 50 years and perhaps only a couple of spills in that entire time.

Riding through Midwood, a favorite route was Ave. J. It had an interesting business section with older signage, and it got me past the Brighton subway line (today’s B and Q trains) since the right of way stopped some of the other avenues cold.

My route would take me past the Di Fara pizzeria at E. 15th. The pizzeria has been owned and operated by Domenico DeMarco since 1964 and the original painted signs may still be on the exterior. DeMarco himself, at age 85 in 2020, still prepares most of the pies personally. DeMarco, a native of the Caserta province in Italy, near Naples, came to the States in 1959 and after working on a Long Island farm, decided to go into business as a restaurant owner and “pizzaiolo” and opened Di Fara with a partner named Farina; Di Fara is a portmanteau of the two names. DeMarco bought out his partner in 1978.

DeMarco, on a good day, makes between 100-150 complete pies, using tomato sauce, spices and cheese imported from Italy and Israel. He cuts fresh basil for his pies with a pair of scissors. DeMarco doesn’t use gloves (and the pizzeria has been closed for health violations on occasion). Last I checked, a slice sold for $5, one of the more expensive in New York, but the pizza is good and each time I’ve been there, I had to wait an hour at least; though it was all in the peak season warm months. 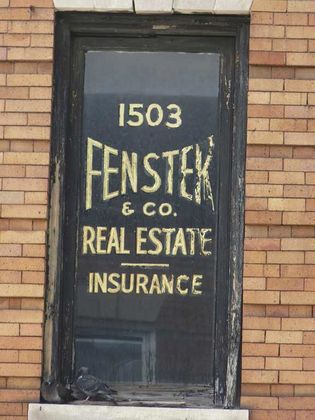 You just don’t find a lot of gold-leaf lettering in windows anymore. The (Leo) Fenster Real Estate Agency, 1503 Ave. J, has been in this location since 1959 when it moved from Ave. M, where it had been founded as the Benjamin Fenster real estate agency in 1938. His son Leo took over after “Benny’s” death in 1954, and Leo’s sons Robert & Michael, and grandson Marc now run the place. I don’t think the agency inspired the 1960s TV show I’m Dickens, He’s Fenster though NBC owned a studio and soundstage a few blocks south of here at Ave. M for may years. 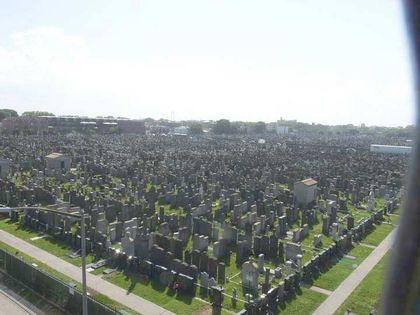 I headed for the Bay Parkway station on the elevated Culver (F) line on this occasion. The southbound train overlooks the vast Washington Cemetery, which stretches irregularly between 19th Ave. and Ocean Parkway and from 53rd to 57th Sts. and another plot south of Bay Parkway east of McDonald Ave. Washington Cemetery has been in Kings County since the mid-1850s, and while it has a primarily Jewish clientele today, that wasn’t always the case; cemetery founder James Arlington Bennett is interred within. He was also an educator and ran for Vice-President in 1840 on a ticket with Joseph Smith, author of the Book of Mormon and founder of the Church of Latter-Day Saints.

The cemetery is divided into five separate numbered cemeteries divided by 20th and 21st Aves/, Bay Parkway, McDonald Ave. and Ocean Parkway. Cemetery #1 is east of McDonald Ave. and #2-5 are between McDonald and 19th Ave. The main entrance is on Bay Parkway near McDonald Ave. You won’t find a lot of big names in Washington Cemetery but Jerry Sterner (1938-2001), author of the play Other People’s Money is here; his headstone reads “Finally, a plot.”