What took place next is all because one man wanted a steak. 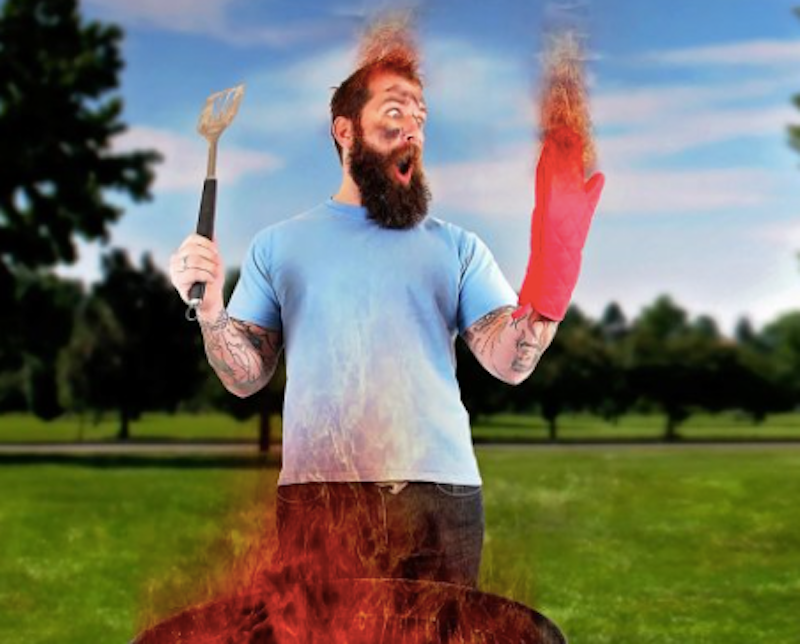 I was perfectly content without a charcoal grill. I love to barbecue, but hate the cleanup. My husband really wanted one, insisting how much fun it’d be to grill outside during the nice weather. I was on the fence, but he insisted. I kept putting it off until he put on the fake sad face and said in his most pathetic voice, "Please... after all, you won't let me buy that (insert expensive guy toy of your choice here). I gave in. It was either the grill or the boat, the enclosed trailer, the rifle, the golf clubs, the ham radio, or the camping gear.

You see why I gave in?

I want you to understand that what took place next is all because one man wanted a steak. After two hours in Lowe's looking around at grills ranging from $100 to over $10K, we finally went home with the Aussie Walkabout, a nice number that was simple, easy-to-clean, and affordable. I know my way around a charcoal grill, as we had a fair number of cookouts when I was a kid. Both mom and dad did the cooking, but dad was responsible for getting the fire started. When dad grilled, his fire was so big that it could send smoke signals all the way to Siberia. Anyway, Vin and I had the food prepped, charcoal laid out in the standard pyramid, and we’re all ready to go. He sprayed some lighter fluid in, and before I could tell him to let it soak in a bit, he drops the match in and suddenly, whoosh!

That fire was a monster, but then petered out. Vin lit it again, but just to be sure, he emptied a half bottle of lighter fluid into the coals. They stayed lit for about a half hour, but with the wind, it fizzled out. Again. It was apparent that our first day of grilling wasn’t going to happen, so we quit, and figured we’d try again. The next time, we had wind, but the charcoals stayed lit. The problem was the steaks took forever to cook. At that point, I wondered, "Why am I doing this? I don't even like steak!

We figured we'd give it a third try on the following weekend. The best charcoal. Plenty of lighter fluid. A slight breeze. No fire. I was willing to keep trying, but Vin had enough. He was fed up with the whole thing. He said, "I'm taking the grill to work and giving it to someone there."

I stopped in my tracks. What? All the time I'd spent trying to get that thing to work, and now he wanted to give it away? Hell no. It was now a matter of principle. I'd make it a planter, a birdhouse, an outside toilet, anything, but no way were we getting rid of that grill. But he’d have none of that. I'm no psychiatrist, but I'm pretty sure that what happened next could be blamed on temporary insanity. One thing’s for sure: I remember doing it, and remember enjoying it.

I went over to the hot grill and kicked it over so the coals would fall out. Then I picked it up by the legs and swung it as hard as I could against this old oak tree. There I was, both hands on the grill, hurling it over and over against the tree screaming, "You're going to give this grill to who?" while Vin’s just standing there, eyes wide and staring at me in astonishment.

The grill? Oh, it was dead. It was a masterpiece. What was left of it was a work of art. I tossed the remains to the ground, looked right at Vin, smiled and said, "Now you can give it away!". Suddenly very calm, I turned around and went into the house.

It was almost a year before we bought another grill. When we did, it was a mutual decision. That one was a Weber, and we never had a problem with it. It had a good life, free from intimidation, harassment, threats, and abuse, and it cooked a great steak.