Does Anyone Need a Gold Car?

Emily Twiggs turns to Brian Powell for information on a local mystery while the fabric of Anytown society hangs in the balance. 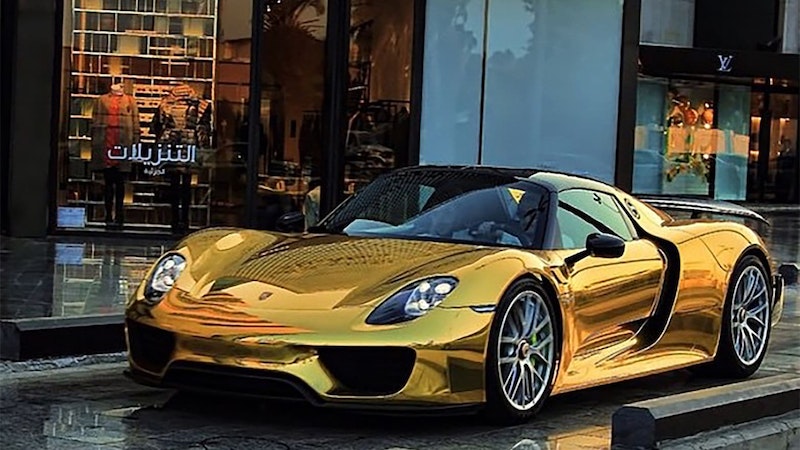 “The Man with the Gold Car, a figure who means many things to many people. To some he’s an inspiration, a shining testament to beauty, hope and everything good about humanity—a dashing, striking, somewhat mysterious man whose piercing blue eyes are pregnant with the very makings of life itself, whose undeniable physical splendor represents the Platonic ideal of the male form, the shining, blond-headed Adonis, zooming through the decades in his magnificent gold car, ageless and perfect,” Theodore “Ted” Tawkes said, pacing the stage in his stiff gray flannel suit and tight-fitting black turtleneck, his left hand clasping his right wrist at the small of his back.

He lowered his head, the pause that ensued so pregnant one might expect it to go into labor any second. At last he raised his bespectacled head, lips pursed as he started off toward the other side of the stage. “But to others,” he continued darkly, raising a forefinger and smiling ironically, “To others, The Man is something else entirely: a killer many times over who represents the most appalling excesses of capitalism and the fetishization of material wealth, plowing over all in his path without regard for any of it, all for what, the thrill of it? His lust for destruction? His appetite for power? Self-glorification of some kind? To feed off the envy so many feel for his wondrous, glistening gold car?”

Tawkes took a seat on the very edge of the lone black stool that stood upon the stage, just the faintest bit of his hip and right posterior touching it, his left leg straight, foot solidly on the floor. The audience was alive with murmurs and mumblings. This was an increasingly contentious subject to the people of Anytown. The Man with the Gold Car had been a revered figure for longer than all but the very oldest of them had been alive, his appearance changing little if at all since the earliest known footage of him had been shot in the early-1930s; for most he’d always been a constant and a cause for celebration and intense local pride, one of his sporadic, wonderful killings a unifying subject for ecstatic conversation among Anytownians of all classes, races, sexes, orientations and creeds. But of late, something had changed.

“Why,” Tawkes resumed finally, “does anyone—anyone at all, no matter what we may think of them at the individual level—need a gold car? Hmm? Why, when there are…”

In that instant, something incredible happened. Just as these words had escaped Tawkes’ lips, and as an image of The Man with the Gold Car standing next to his legendary vehicle, a bouquet of roses in the crook of his right arm and his left around the doomed bombshell starlet Lyla Augustine, his flawless white teeth shining as he smiled widely, an inscrutable twinkle in his eyes, Lyla touching a hand to his chin and giving him a peck on the cheek with her signature luscious red lips, the screen on which it was projected tore apart, fell away, the photograph of the happy pair tone asunder and both appearing to melt away as the vinyl screen crumpled to the floor and the gold car—real as life and with its unfathomably powerful engine roaring like an enraged beast—came soaring through the void. Flash bulbs popped and onlookers gasped. “Ted” Tawkes cried out in awed terror as the gold car’s grill slammed into him, ripping his body clean in half, his detached legs falling one after the other to the stage surface as blood and entrails poured and sprayed from his disembodied torso, splattering the audience, the chairs they’d vacated, the floor. The gold car landed with surprising grace, agility even, skidding and screeching, its passenger side facing the back of the auditorium, its immaculate gold body gleaming beneath the lights.

The shrieking and screaming from the fleeing crowd abated shortly after. Most of its members turned round to face the gold car that stood before them, many of their faces and persons decorated with the guts and gore of the late Theodore Tawkes. Beyond the soporific hum of the gold car’s engine, there was no noise. And then the onlookers began to applaud vigorously, some huzzahing and cheering. Truly this was another masterpiece.

“They say Ted Tawkes—his head, you know, when they found it—had a smile, like a big, uh, contented smile,” Brian Powell belched, putting his fist before his mouth and hiccupping a little thereafter.

Emily Twiggs was stunned. As an emigre from Coast City, she found this “Man with the Gold Car” business confusing, even troubling. “What did the police say? You know, after Mr. Tawkes was killed,” she inquired, finishing off her cosmo. It tasted awful, almost like rubbing alcohol—what kind of a place was this?

“What do you mean? Why would they say anything?” Powell asked, thoroughly befuddled. He signalled to Servais for another round and lit a smoke. “No one wanted to press any charges. Most people agree it’s one of The Man’s signature works. Check it out on YouTube—really resonant stuff.”

Emily frowned, and not just because the oaf from behind the bar set another one of those rotten cosmos in front of her. Powell took a long, eager gulp of his triple rye neat, which he chased with a pull from his cigarette. Servais was distracted by something—probably good, or he might’ve slammed Emily’s head on the table for turning up her nose at his shitty cosmopolitan. Nothing irked him more than his ability to make drinks being impugned, save perhaps for digs about his sub-Mendoza Line BA during the 1994 season. It was a strike-shortened year! He was coming out of his slump when the season was called. His bat always heated up in late August and September.

He was looking at the 13” TV set on the corner of the bar. The news was on and anchor Trace Crabtree was in the midst of relaying how crowds of protesters had assembled around Anytown General to either voice support or condemnation of injured “writer” Danny Cater.

“Like steel shavings to a magnet,” Servais remarked in his gravelly voice, which nonetheless had a curious sort of whistling quality to it. Pulling one of the smokes from Powell’s pack, the grizzled man’s man lit it, tossed the lighter back on the pack and added bitterly, “Or flies to bullshit,” and sauntered away.

Servais turned quickly. “Then shove it up your ass, Tits, ‘cuz I don’t give a flying fuck what ya like!” he roared.

Emily all but jumped out of her skin. “I meant the p-protests, mister,” she stammered.

The crimson tint and army of throbbing veins subsided from Servais’ face and neck. He cleared his throat, did a little tilt of his head that would likely have to function for all time as his apology to Emily, then walked back to the bar. As if to further smooth out the tensions which had arisen from the miscommunication, she choked down a bit of cosmo, exhaling painedly afterward.

“Have you, uh, been to see him?” Powell asked, stubbing out his cigarette.

“Yes,” Emily answered. “He was delirious. His mom said he had a concussion, some broken ribs and a broken leg, a ‘pilon fracture,’ they say. It’s supposed to be one of the worst kinds there is. He probably won’t ever walk right again.”

Powell failed to stifle a derisive laugh. “He never walked right before! Always tumbling all over the place with the ‘trick ankle,’ slinging his arms around wildly,” he sneered.

“That’s not nice. You know, there’s a lot of mean things somebody could say about you too,” she said, her brow furrowed disapprovingly.

“Sorry. I didn’t mean—Christ, he’s just such a little creep,” Powell’s teeth were clenched, his dander up as he thought of Cater, who he’d not even seen in at least a year. He took a breath. “I know he’s your friend and…”

“He is! He’s my best friend and he’s very sweet and if I didn’t have a boyfriend who I love very, very much back in Coast City, why, I might just ask him to go steady with me!” Emily said breathlessly.

“You’d go out with Danny. Danny Cater,” Powell said, emphasizing this to highlight its ridiculousness more so than for clarity’s sake.

“If he’d have me, sure!” she said defiantly.

That statement could only be followed by or responded to in one way without ruining the fragile friendship, Powell thought, so he did it: finishing his drink. With his nerves settled, he took a different tack. “You know, Emily, you really ought not get any more involved with this stuff than you need to. I know he—Danny,” they exchanged a quick glance before Powell looked down and began batting his empty glass lightly back and forth, “is your friend, but, uh, they’re really gonna nail his ass to the wall for this thing, and if you get involved, I don’t want to see anything bad to happen to, you know, to you.”

Brian’s attempt to display concern for Emily did little to dissuade her. “The doctors said that it was only his special driving helmet and blind luck—a miracle, I think—that saved Danny’s life, Ryan.”

“Brian, and I’m not going to let the miracle of his life go to waste by seeing him sent to prison for the deaths this, this ‘Gold Car Man’ caused!” she said forcefully. She considered, briefly, taking a drink for emphasis but decided against it—so yucky! She grabbed her bag and slung its strap over her shoulder, carried her sweater over her arm. “Thanks for the drink.”

“Emily!” Brian called out impotently. “Where are you going?”

“To find The Man’s daughter. I’m gonna get to the bottom of this,” Emily said as she pushed through the door.

Servais took a gulp from the bottle and then tapped it on Powell’s shoulder. “Figured ya could use this,” he said.

Powell took it and a long swig. Servais plopped down at the table and, after another pull, Brian passed back the bottle.

“Does The Man even have a daughter?” Powell asked both wearily and warily.

Servais eyed him reproachfully but his words were at least as concerned as they were disapproving. “Kid, don’t go digging around in this kinda dirt, not when yer just gettin’ clean.”