Into the Woods in Queens 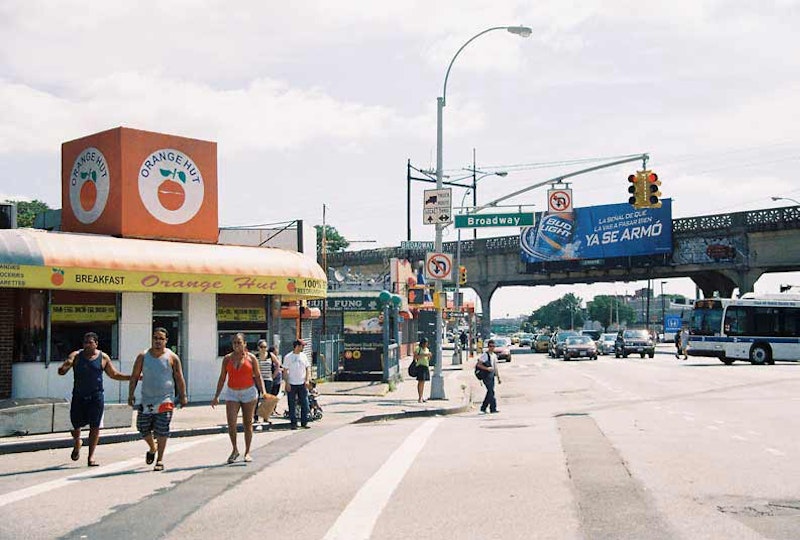 Woodside’s a bustling community centered at Roosevelt Ave. and 61st St., and was originally a part of Newtown, a larger colonial village. It was a woodsy swamp until the mid-1860s, when developer Benjamin Hitchcock purchased the John Kelly farm and divided it into building lots located along today’s Woodside Ave. Kelly, an early settler, was part-owner of a Brooklyn newspaper and sent it dispatches from his home in the “sticks” that he called “Letters from Woodside.” Today in Woodside you’re just as likely to exit an Irish bar and enter an Indian restaurant as you are to walk out of a bodega and pass a remnant of the colonial era.

All five boroughs have a Broadway (the one on the Bronx is a northern extension of Manhattan’s). Queens’ Broadway was built from its extremities in Ravenswood, Long Island City and downtown Newtown (now Elmhurst) and was only completed, in the middle, after the IND Subway, which runs beneath it, was finished in the mid-1930s.

In the photo above, we see the junction of Broadway and Northern Blvd., where railroad tracks are elevated in the background. Commuter and intercity rail connecting NYC and New England has run over these tracks since the Hell Gate Bridge was constructed in 1916-1917. Here the line has just emerged from the Sunnyside Yards and the tunnel to Penn Station. It will soon join with the NY Connecting Railroad at 25th Ave. and cross the bridge across Randalls Island and into the Bronx. 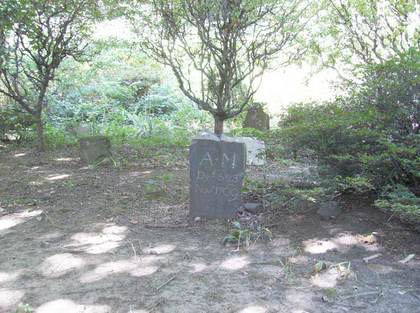 It looks like a fenced-off empty lot on the west side of 54th St. between 32nd and 31st Aves. as you walk north. That’s until you see the tombstones. This has been a burial ground for almost three centuries.

Queens was home to the Moore family, the family that gave rise to Clement Clarke Moore, to whom the famed poem “A Visit from St. Nicholas” is credited. Clement was the great-great-great grandson of Reverend John Moore, who became the first minister in the town of Middleburg (today’s Elmhurst) in 1656. Family descendant Nathaniel Moore, Jr. stipulated in his 1827 will that his real estate on either side of Bowery Bay Rd. (today’s 51st St.) be sold after his death, with the exception of the family burial ground, located today on the west side of 54th St. between 31st and 32nd Aves.

The cemetery was established by 1733 (the date of the earliest known burial) and has been known as the Moore-Jackson Cemetery since John Jackson married into the family and added to the cemetery’s acreage. He was, however, buried in the churchyard of St. James Episcopal Church on Broadway in Elmhurst. The last interment in the cemetery was in 1867. 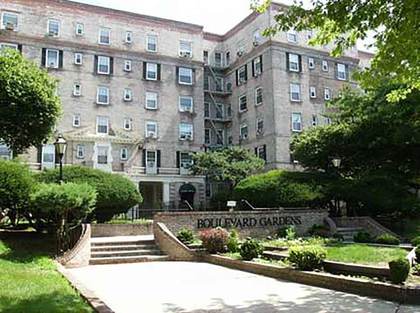 Boulevard Gardens, at the NE corner of 54th St. and 31st Ave., was founded in 1935 as part of the United States’ New Deal initiative. T.H. Engelhardt designed Boulevard Gardens in 1933 in concert with renowned landscape architect C.N. Lowrie. Engelhardt and Lowrie brought the vision of the original developer, Cord Meyer Development Company to life. Currently, Boulevard Gardens is comprised of 963 residences with a mix of studios, one-bedroom, two-bedrooms and three-bedrooms. Many of the high floor residences have Manhattan skyline views. 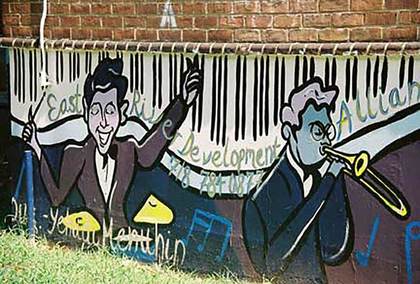 The Woodside Houses comprise 20 six-story buildings with 1358 apartments housing an estimated 3442 people. Completed on December 30, 1949, the 22.3-acre complex is between 49th and 51st Sts., 31st Ave. and Newtown Rd. The complex still has its original elegant blue and white tin directional signs. Artwork depicting jazz greats such as Billie Holiday, Frank Sinatra, Dizzy Gillespie and Glenn Miller is arrayed along the ground floor. 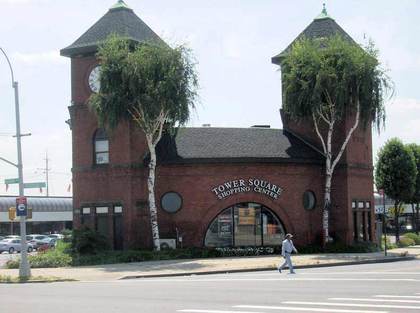 At Northern Blvd. and Woodside Ave. is a large shopping mall, delineated by an incongruous-looking twin-towered brick building. This was the waiting room at an old trolley junction for four decades, and the subject of the first Forgotten New York page I wrote in 1998.

William Steinway, the piano manufacturer, electrified his Long Island City streetcar line, the Steinway Railway Company, and hooked up with developer Cord Meyer’s Newtown Railway Company, which extended to Corona, in 1894. Two years later, the lines reorganized as The New York and Queens County Railway Company and built a handsome, twin-spired brick depot at Northern Blvd. and Woodside Aves. Trolleys would ply these roads to Queens’ eastern sections. Steinway built a tunnel to take trolleys into midtown Manhattan on 42nd St., but they went unused for two decades before reactivated as part of the IRT Flushing Line when it opened in the early-1910s.

Trolley service out of this depot ran from 1894 until September 1937, when buses took over. The eastern end of the building was torn down in 1930 after a fire. Over the decades, the old trolley barn was deserted and in danger of demolition until it was preserved in 1987 as part of the Tower Square Shopping Center. The north tower’s clock again works, and above the arched entrance you can still find an emblazoned “N.Y. and Queens County Ry. Company” and “Waiting Room.” 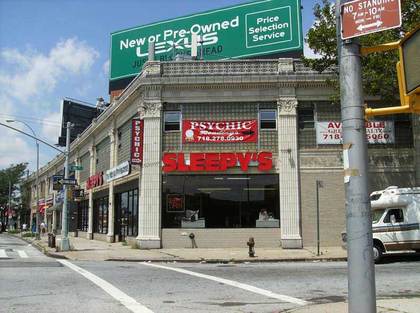 Northern Blvd. and 48th St., now a stretch of car dealerships, was once the site of a massive, 72,000-seat open-air stadium, Madison Square Garden Bowl. It was open for only a few years in the 1930s, during which time the heavyweight boxing champion lost each time; the last winner was Joe Louis, who’d have likely broken the curse if the place remained open. Madison Square Garden management decided to lease bouts to Yankee Stadium or the Polo Grounds in the late-1930s and the Bowl was unceremoniously razed.

One such car dealership is the should-be-landmarked Packard showroom on the north side of Northern Blvd. between 45th and 46th, now home to many different concerns. Old photographs show there used to be plate glass windows where the glass bricks are now, with autos displayed behind them. Packard was an American luxury automobile built by the Packard Motor Car Company of Detroit and later by the Studebaker-Packard Corporation of South Bend, Indiana. The first Packard automobiles were produced in 1899 and the last in 1958. Packard was founded by James Ward Packard (Lehigh University Class of 1884), his brother William Doud Packard and their partner, George Lewis Weiss, in the city of Warren, Ohio.