How Marston Green made magic. 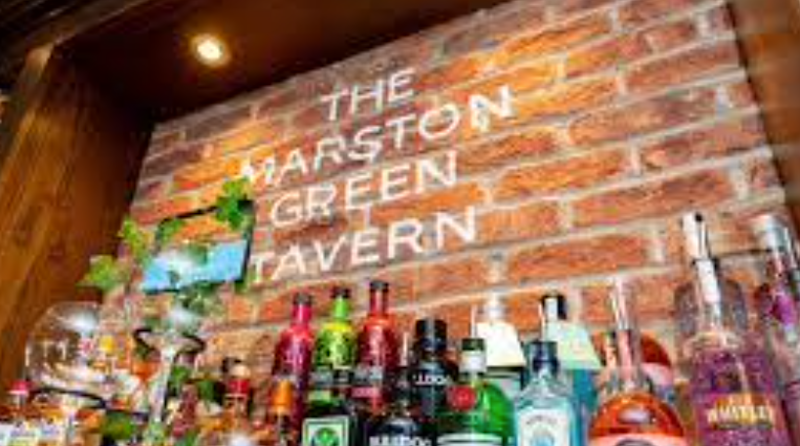 Marston Green in the West Midlands is a nondescript little spot on the map. It calls itself a village, but it’s not really. It lies on the outskirts of Birmingham, between Tile Cross and Chelmsley Wood, attached to the city by a thin strip of dusty road, like an apron string from the Mother City to its sickly, dependent child. It’s where I spent the last years of my youth.

It’s completely dominated by Birmingham airport. As soon as I got off the train there was the roar of a jet engine revving up before take-off. It was loud enough to rattle the walls of the village. It’d be hard to imagine such a noise if you’d never heard it before. “Roar” is too tame a word: more like the bellow of some strange antediluvian beast emerging from the mythical forest than any living creature.

It was odd hearing that noise, having completely forgotten how overwhelming it was. The end of the airport is no more than a few hundred yards from the house where I lived.

I was there from the age of 16 to 18. My youngest sister and brother grew up there, and I continued to visit, on and off, till my mum and dad moved out in 2000. But it’s also tied up with memories of childhood. My grandparents lived there, and we often visited. The pub, the Marston Green Tavern, was a single-story brick-built building, set in extensive gardens, where we used to play while the adults enjoyed themselves with a beer. These days the gardens are covered in tarmac to provide car parking spaces for the punters.

I don’t know why I wanted to go back. There’s nothing there for me now. My grandparents are long gone. My parents moved out more than 20 years ago, and they’ve passed away as well. Marston Green is little more than a name on a map. And yet there was something there. Memories that only existed in my head, that would be forever extinguished once I’m gone too. It was the strangest sensation. I walked passed the place where Nan and Grandad Weatherall lived, and clearly saw Nan at the window, waiting for me. She’d been there for years, just waiting. Later I saw Grandad crossing the bridge over the railway line. He didn’t recognize me. He’d forgotten who I was.

They weren’t really there, just in my head. But it took the bricks and stones, the tarmac and the paving slabs of the village—these dead things—to bring the memories to life. I went to the pub and drank a pint. It was as if I knew all the people in here. One of them nodded to me, as if he knew who I was. Who knows, maybe he did. Maybe he recognized me from all those years back. I spent many evenings in that pub. That table there, just to my left, where a group a people sat and drank: it was where I’d sat the evening my brother told us that he’d been offered a job in America. We all said that he should go. And then, when he did, it left my mum bereft, so I invited them to come and live in my town. That’s why they left Marston Green. I never had any cause to go back after that.

And yet, sitting here on the grubby bench chair in the lounge of the Marston Green Tavern, with the tang of stale beer in my nostrils, it was as if I was sitting at that table still, talking to my brother; as if that night, and conversation, was etched into the annals of eternity, as if on some level it was still happening.

After my drink I walked by the airport to see the ghost of a child on his way to his nan’s for Christmas dinner. He was 10 years old and on his bike. It was a mild, gray day, not at all like the Christmas of the previous year, when the snow had fallen thick and fast and stayed on the ground from November to March. He got the bike for Christmas and insisted he ride it to Nan’s. It was the first time his mum had let him go such a long distance on his own. He was very excited.

After that I walked under the railway bridge, where the ghost of a teenager sniffed glue and slipped quietly into the hole it had drilled into his brain. He woke up suddenly, not knowing where he’d been. Then I walked to the bus stop where I caught the bus which passed the old school, where the ghost of a schoolboy rushed hurriedly and nervously to get there on time. And then into Birmingham city center, where ghosts thronged amidst the hubbub: ghosts of many ages, eras and decades. There were as many ghosts as there were people in that busy crowd, all vying for attention.

Does this matter? They’re my ghosts, not yours. And yet, here I am, planting them in your mind, creating ghosts from the faint scribbles like insect trails that wander over the pages of my notebook, reaching tentatively into the future, in the vain hope that someone might read this one day.

There are ghosts everywhere. Every pavement slab, every brick, every stone has its memories. Every leaf, every bough. And aren’t we made of memories? The body excretes the dead cells of our lives continuously. The whole body dies maybe 10 times in a lifetime, and yet the memories live on. It only takes something familiar to bring them back. Where are the memories stored? Not in the body, which isn’t the same body we were born with. Not really in the physical world, which has merely provided the stimulus to the memories. There must be a place, beyond the solid world of matter, where these memories linger; a kind of field memory, like the electromagnetic field that our body generates and which surrounds us like an egg.

We live in separate worlds. Your ghosts aren’t my ghosts. You have unique memories. Even as we gaze upon the same scene, your thoughts are separate from mine. You smell separate smells, hear separate sounds, see separate sights, dream separate dreams. All of these events are happening in your separate brain. They’re processed in your brain, which constructs your world for you. It’s what the great philosopher-poet Robert Anton Wilson called (after Timothy Leary) your reality tunnel: a model of the world, greatly simplified, which allows you to get around without too many mishaps, but which is only the semblance of the real world, which you never get to see.

This isn’t to say that there’s no such thing as reality, just that the reality that we know is second hand. Real plants, real animals share our world with us. It’s their world too. Real winds blow. A real sun shines down upon us through the atmosphere. Real gravity holds us in its inescapable embrace. But our view of reality is constructed for us by the stories we were told when children, which is why ghosts were more prevalent in the past, when more of us believed in them.

This is where magic comes in. Magic allows us to step into that space between imagination and reality and effect a change. Ritual practice is a way of engaging with the world. It’s a way of articulating a relationship, a way of communicating with the world in more than mere words. If the world as we know it is a construct made of signals in the brain, then we can alter its meaning by magical acts of ritual significance.

We’re ritual beings. Most of us live our lives routinely, doing the same things at the same time, in the same way, every day. What magical ritual does is to insert a deliberate, conscious intent into the unconscious routine, to make the world new again. If I talk to the trees, do they hear? I can never know, but I know that I do.

If I return to the past along streets of memory, as I’m doing now, I’m engaging in an act of magic. I constructed this world, here in my head. That pavement slab, that window, that bridge, where the memories abide, are products of my mind, made real by my relationship with them. They live again and again, in other people’s heads, in other people’s memories, but here now, in this moment, they’re mine. I created them. I gave them life. I made them breathe.

After Birmingham city center, I caught the number 60 bus from Digbeth, along the Coventry Road to South Yardley. I got off at Sunnymead Road. That’s where I had spent my childhood. I walked past the house where I was brought up. I remembered a scary dream I’d had as a child. I came to this house and it was no longer mine. Strangers were living in it and when I knocked on the door they didn’t know who I was. This was exactly the position I found myself in now, a stranger outside my own front door, an old man lost in his memories. I decided I’d had enough. I caught the bus back to the railway station and got the train home.