Even Roosters Get the Zoomies

Bennington meets a ravaged bird on his daily stoner walk. 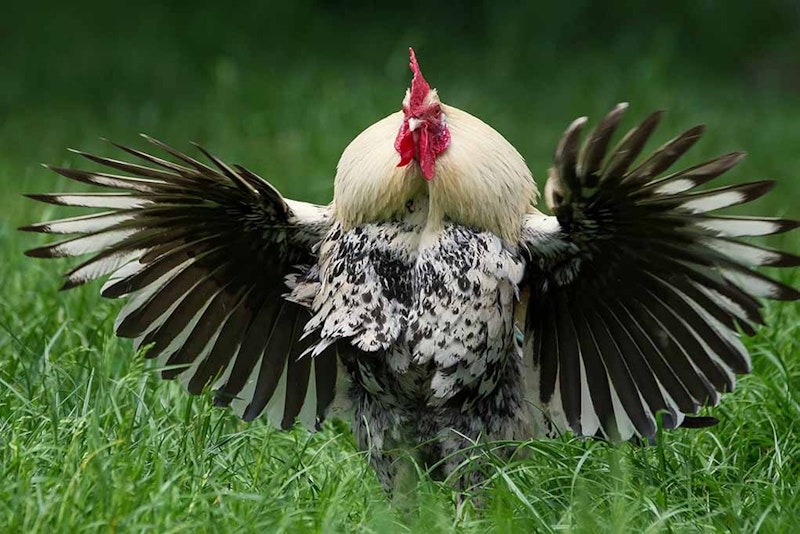 As I went out one morning… Rooster forgets he’s written that column a million times already. As I went out one morning, As I went walking one morning… never anything interesting happens. He’s always talking about weird characters and unbelievable events and acts of God and serendipity, but usually it ends with like… him getting breakfast. Or a shaggy dog story that has nothing to do with a walk in the morning. I mean, as a reader, I’d be put off. I’d want my time back, if not my money (artists should be responsible for a certain percentage of their audiences’ bills if they ever want to have any audience at all).

I’ll tell you something really wild that happened to me on MY WALK yesterday. I didn’t have a vision, there was no little old lady, nor a figment of Rooster’s fickle imagination: I met a genuine hobo. Not only a real hobo, but a bird hobo—a rooster, too! He looked terrible, all rag and bone and what little blood he had left to spill. I turned corner by the hedgerow after taking a strong hit from my chillum and found this crooked little creature slumped over by the side of the road. I thought he was dead, so I started digging around in his pockets for money and drugs when he jostled me. “Oh, sorry, I was just checking the weather…” My standard excuse for getting out of trouble didn’t work on him. And in his voice, there was something uncomfortable. I knew this voice from somewhere.

“LEAVE ME ALONE!” All of a sudden this craggy old thing leapt up out of his bundle and started having a full-blown episode of the zoomies. He was going along the entire visible stretch of dirt and tulips just balling out. I was too scared to do anything but stand in place. It was honestly impressive what he was doing, especially at his age, really complex spur claw maneuvers parlayed into grip strength displays and a finishing move of hackle wink that left my beak hanging open. The old timer took the opportunity to spit in my mouth. I grabbed him by his coat collar but it ripped off and he fell to the ground and screamed. A wounded bird lay at my claws—this didn’t look good. Despite my desire to run, I got down and “comforted” him.

“Are you okay? I’m sorry, I really didn’t see you there… alright, man, look, I’m sorry I went in your pockets, you know how it is, I thought you were already picked over anyway—” The bird leapt up again and gave me the most vicious spur clawing I’ve had since… Monica last attacked me. Five years ago. The same balletic motion in his cutting… that particular shade of red in his feathers, however withered… Even in the cuts he left, I could sense a bond.

I apologized and begged the man for forgiveness. He only granted me such when I gave him candy, nuts, drugs, water, soda, and money. Outside of the Marshfield 7/11 (there is only one), smoking menthols, I asked the old timer his name. He turned to look at me, slowly, making sure his hate was received. I wanted to cry when he told me his name was, “Linn Quibbits.”