Incident at the Border

Please, just let me back in. 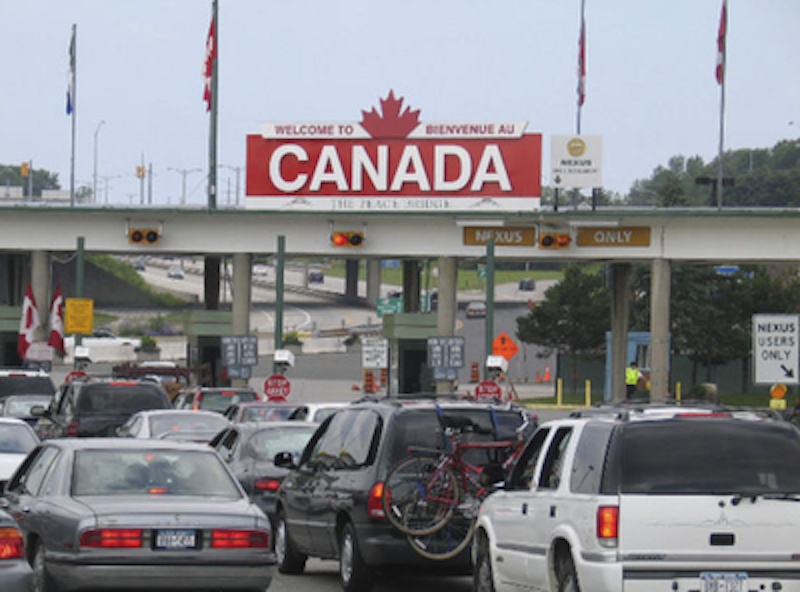 The bus reached the border about four p.m. I’ve been through many times, and the weather there isn’t always gray and cold, but it might as well be. The Lacolle border crossing is a zone full of cement and asphalt, but mainly cement. A low building—one story, and a minute story at that—stretches a modest distance and then ends a little before the highway resumes. Another low building, sitting across the asphalt from the first, stretches a longer distance but remains just as dinky in height. The land is flat and the sky closes down like a cover. This particular afternoon it looked like iron that was turning black; we were headed well into night.

I left my seat and picked my way along to the front of the bus, then slid down next to a courteous young fellow who had en empty seat. After the bus driver gave us the go-ahead to disembark, I popped out of the seat, clambered down the steps to the sidewalk, and grabbed my backpack, which was sitting on the pavement with all the other luggage. Canada always wants you to bring in your bags when the officials look you over. The Americans want you to leave all your bags on the bus, I suppose for closer inspection.

Everybody else was still collecting their goods when I went inside. I stood there, first on line, and looked through the glass doors at the two border officials: at the near station was a dumpy Québècois woman with frizzy hair, and across from her was a second station and a tiny Asian woman. As officials do, they kept busy with record-keeping of some sort, not looking up. Then the frizzy woman lifted a hand and I stepped forward. The glass doors slid apart.

I handed over my permanent resident card and told the lady that I was probably on a list and would have to go across the asphalt to the long low building, the main immigration shed. She told me that, oh no, if I had my card then… She looked at the card. “This is expired,” she said. She looked closer. “Wow,” she said, because the card expired a long time ago. I told her that I had filed my application for a new one back in February 2015.

“Why is it taking so long?” she asked.

The border people always ask me this. It’s not enough that the main office is sitting on my application. I also have to explain department policy to the department’s employees. I told the frizzy lady that Immigration Canada won’t discuss a given file with anyone at all, not even the person that the file’s about. Personally I can see why: they’d be getting calls all day, every day, and they already get plenty. But the people at the border ought to know this.

The frizzy lady looked at her computer. She called across to the Asian lady about what command to use. This was a Monday, which I expect is a slow travel day and one suited to breaking in new employees. The Asian lady told her what she needed to know.

The frizzy lady told me I was on a list and would have to go to the main shed. She gave me a slip of paper.

I humped it across the asphalt, backpack bouncing on my shoulder. Inside the main building, I headed for Counter B. Travelers sat on benches. On the other side of a glass wall, more travelers sat on more benches. These travelers looked like they’d been there quite a while. That was the holding pen. People wind up there for reasons I don’t know; from what I’ve seen, most are black or brown.

On the other side of Counter B, people in uniforms picked pieces of paper up and put them down. I presented myself and a woman at a desk talked to me. She was Asian too, with a bowl cut and a pair of round, black-rimmed glasses that seemed immense. I handed over my slip, and the lady tapped the keys of her computer. She peered at the screen and told me what the Counter B people always tell me: “This says your application is under review.” She looked at the dates involved and then looked more closely at her screen. She said, “Do you have any idea why?” I said I didn’t.

After this point, the Counter B people always find different things to talk about. One explained to me the importance of making sure that everyone with a permanent resident card actually lived in Canada. Another told me that I ought to bring a photocopy of my application. Another looked over my photocopy and said the application looked okay to him. Another commiserated with me over how long headquarters could take. Another advised me on how to renounce my Canadian status if I wanted to go back to the U.S. That conversation was this spring, when I’d paid my taxes and found I was getting hit like crazy on capital gains. I had also just discovered that Canada’s health care system doesn’t cover physiotherapy, which I happened to need. And I’d been waiting more than a year for my permanent resident card.

This time the lady with the big glasses gave me a talk on how I have to stay in Canada a certain amount of time to keep my status. This amount is two years out of five. I told her I knew, that I visited my mother for a couple of weeks three or four times a year, and that otherwise I barely left my apartment.

“But it’s very important,” she said, suffering from the sort of hearing some officials have. “If you’re not living in Canada, then—”

I burst out. Admittedly, to hear me burst out isn’t much of an experience, but it was more than she expected. Her head jerked back and her face froze. Another of the officials, off at another desk, swung his head around and stared.

I didn’t burst out regarding Canadian taxes or the dim-witted federal bureaucracy or even the experience of sitting in a gray clinic jammed with people at 8 in the morning and discovering I couldn’t get treatment for the thing that happened to be bothering me. I had something else on my mind.

“Are you kidding me?” I said. “Do you know what happened last week?”

The woman’s mouth was a small, astonished circle beneath the large black o’s of her glasses. “What?” she asked, voice tiny.

“They elected Donald Trump!” I said. “Do you think I want to be there? Canada’s where I live and it’s where I want to be. Here. Not there.” A thought occurred to me. “It’s not safe,” I said.

The other passengers were still waiting for the bus when I came back. Good, because I hadn’t slowed them down. I squatted on the sidewalk along the shed and waited too. When the bus rolled out, the sky had gone black.