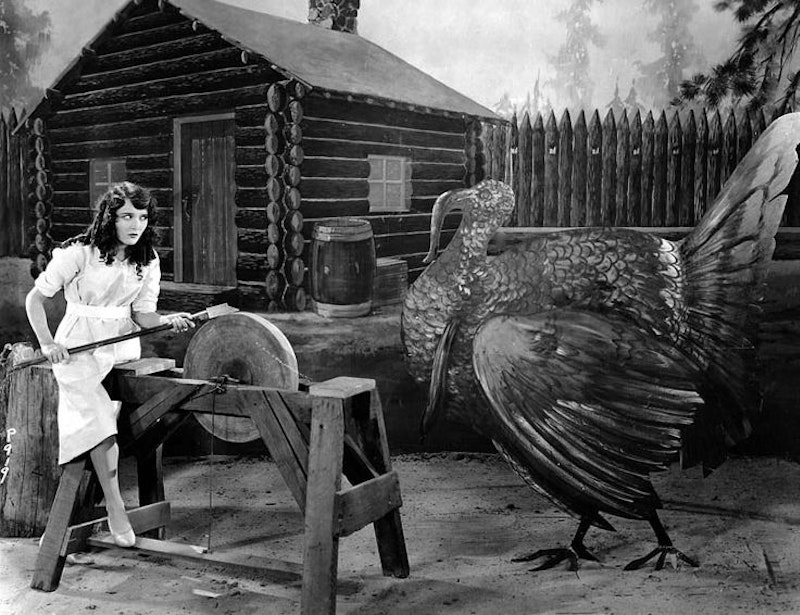 I’m of two minds about Thanksgiving. On the one hand, I despise how it’s been transformed into yet another excuse for jingoism. It’s a pageant of football (that metaphor for neoconservative militarism), obscene food, and the disgusting Americanist sentimentality that’s best expressed by the Thanksgiving Message of whatever warmongering Zionist-in-Chief is currently befouling the White House.

On the other hand, I’m of old New England stock myself on one side of my family. And if my Grandmother Harris was exaggerating when she insisted that the blood of Miles Standish ran in our veins, she wasn’t far off. I certainly have better claim to celebrate Thanksgiving than does, say, Obama, that apparently clean black who will address the fat American hordes on Thanksgiving Day. For that matter, I’ve got better claim to the holiday than 99.99 percent of the inhabitants of this increasingly dusky and teeming polyglot country of ours.

In that generous spirit, here are some of the things I’m thankful for this year.

Melania and Ivanka Trump, those ugly and ungainly whores. I’ve already written about the physical ugliness of the Flushing pimp’s daughter and Bohunk prostitute of a wife. As a traditionalist Russian Orthodox Christian, though, I’m thankful for this. Let me explain.

It’s always struck me as inappropriate that the White House should have, from the era of Lady Bird Johnson through the present, functioned as an aviary of beautiful swans, a harem of the Female Graces. There’s been something decadent about this fact—it’s un-republican. I’ve considered this decadent surfeit of White House beauty as one of the small reasons why the Old Republic met its final death during my lifetime.

It’s ironic that the vulgar pagan Trump, this Ozone Park Caligula, should be the one to bring female ugliness—if a corrupt kind of ugliness, as opposed to the simple, virtuous kind of ugliness that Mother and Sister Marie embody, not to mention the wives of some of our most learned paleoconservative pundit— back to the White House. But so he is.

Wonderful confirmed bachelors. Without mentioning any names, I should point out that some of my favorite paleocon writers—stout soldiers of the Kremlin, delightfully stoat-faced and snuffling to a man—are, I’ve learned through the Russian Orthodox grapevine, “confirmed bachelors.” Well, all the more power to them. Glory to the love that the Greeks dared name!

Do I contradict myself as a conservative Orthodox Christian? As a foe of the sodomite and the oral acrobat? Very well then, I contradict myself. Morality aside, I wouldn’t stop reading a man just because he favored strong, manly love. Like Whitman (a sodomite himself), I am large; I contain multitudes.

There is a legend to the effect that the tiny reliquary box is actually empty, having been stripped of its precious cargo by a monk fleeing Pskov during that city’s Cossack Massacres of the spring of 1704. Since opening the box was anathemized by Partriarch Constantius during the reign of Alexander II, we have no way of now knowing whether it is in fact empty or not.

No matter! The testicle reliquary box still sheds its benign energy. I look forward to arranging for local Indiana school groups to visit the reliquary at our church, as part of our outreach to our local community of the meth-addicted and unredeemed.

A happy Thanksgiving to all!