Take that, you sniveling perv. 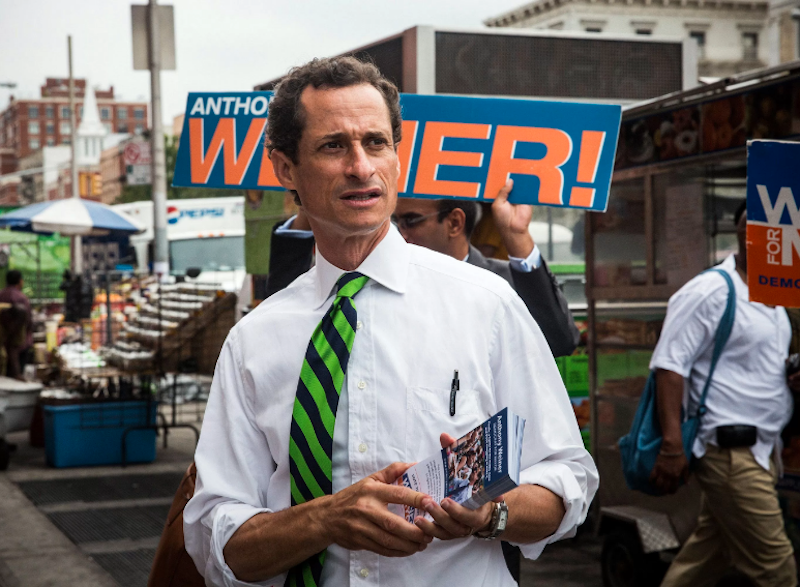 “This is for Iowa!” I say. Then, remembering, I add, “She was 15!” He backs away, eyes darting. Perhaps he wants a weapon, a shield. I kick the garbage can out of reach. The clang resounds and his hands fly before his face. “Eight points under for honesty,” I snarl. “Eight points behind Trump. For honesty!” Weiner tries to form words but cannot; his head swings back and forth. “Washington Post/ABC tracking poll,” I say. “Because of your laptop,” I tell him, and the rage in my voice has gone cold. “You and your laptop and your… your…”

“The Florida voters,” he says, his voice thick. “The exit poll. Twenty-eight percent of Republican early voters in Florida voted for Hillary. I didn’t blow it. See? I didn’t.”

“You damp strip of toilet paper on the shoe of the Democratic Party,” I say.

“Who ever heard of the TargetSmart/William & Mary Poll?” I say. “I’m supposed to feel better because—Ah no!” My foot lands on his wrist. The coward was about to grab my ankle.

“Pennsylvania,” he says. “Firewall. North Carolina. She’s campaigning in, in Arizona.” My head jerks back. He’s wrenched his hand out from beneath my foot. Blood from his torn skin mixes with the raindrops.

“Our lead dropped six in Monmouth,” I say, and I spit on him. I can’t help it. The spit lands on his brow and he doesn’t wipe it away.

“He was going to take New York,” Weiner says, looking up from the asphalt. The toppled garbage can has spilled its contents. “Going to, to campaign in California.” He’s trying to get on my good side. “How’s that for a laugh, huh? ‘Expand the map.’ Expand my—”

He lunges, heaving forward from his knees. His mistake. I’m ready for him and my foot swings true. His beak of a nose now has a bend in it.

“Do you want to try again?” I say. He doesn’t. His face topples into a puddle; more blood mingles with the rain. I have to admit his buttocks are admirably carved.

“P90X,” I mutter, and now I go to work. One boot pins his neck. The other thuds against his scalp. After seconds—minutes?—his skull seems to say something. It makes a wet sort of groan and a gap opens in his hair. The gap is pink and then it’s red—a whole lot of red. The puddle has changed color; now it’s red too.

DVD corner. They say a society on the brink of collapse produces good movies. But they say this only because of Weimar Germany. The Testament of Dr. Mabuse came out in April 1933, the same happy spring when innocent Germans discovered they had a führer. This coming April the people of America can expect an eighth Fast and Furious movie and Smurfs: The Lost Village. There’s also a feel-good vehicle about Chris Evans and his super-smart blonde niece. Starting a dictatorship under these conditions is like getting run over with dirty underwear. Don’t do it, America. Vote Hillary.

As for Testament, I recall that it’s admirably old and foreign and that a febrile atmosphere of moral decay rises off of it. All of society is rendered as a puzzle-box conspiracy in which lawful authority merely fronts for… Aw, screw it. To tell the truth, I bet I’d prefer the Chris Evans movie. But still, don’t vote for Trump. If you want to suffer, go see the Smurfs. That’s what they’re for.