An Open Letter to the Transphobic Teens on My Train

Will it ever get better? 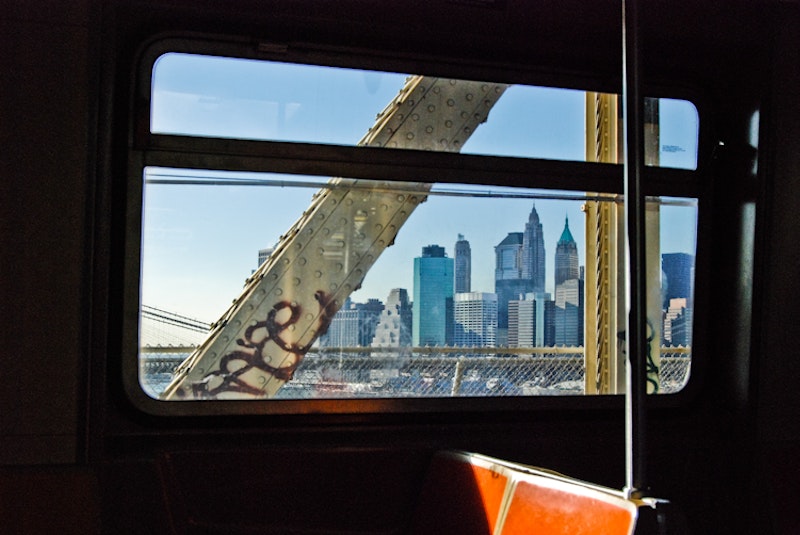 You probably remember me. I sure remember all three of you: the one with braids, the one with the headband and long hair, but mainly the stick-thin bespectacled one whose gleeful ignorance got my attention in the first place. We were only together for five minutes or so, but I still carry the memory of our train ride around with me. That’s probably not healthy; I can feel my heart rate increasing as I write this. But you need to know. And so do the adults who fucked you up in the first place.

If you’ll recall, we were on the Q train leaving Manhattan on a sunny Tuesday afternoon. I love the Q train, partially for its general reliability during the day, but mainly because it takes me over the Manhattan Bridge. I sat on the north side of the train, as I always try to do so that I can see the best parts of the river and skyline. That view always brightens my day—I’m reminded of the things that make me love this city, and just for a little while, I can forget about all the things that have gone wrong or are stressing me out that day.

I really needed that moment, you know. Mailing my rent earlier, I’d been catcalled three times in less than a minute; later, filming a live video at work, a commenter noted, “Whoa, your deep voice! Yikes, dude!” Feeling extremely self-conscious, I wanted nothing more than to alternate between reading my book and gazing out the far window—my batteries needed that quick recharge.

That wasn’t going to happen, though. Alerted to your conversation by the raucous laughter, I couldn’t help but listen as Stick-Thin’s words filtered through my ears. “I thought it was a female! I didn’t know what to call it!”

One or two among you, I gathered, had passed a non-passing transgender woman earlier and for some reason had been spooked. If that had been it, I would have let it go; in any demographic, there are going to be some real creeps, and trans folks are no different. But your discomfort seemed not to extend merely to the encounter, but to her existence itself. “She got no tits,” Stick-Thin hollered.

At this point I was glaring openly at you, and Stick-Thin noticed, motioning to the rest of your group to take the volume down. I thought you might move on to another topic. You had other plans; namely, spend the entire trip to DeKalb Ave. rehashing the same ideas. “It looked good, but I didn’t know what to call it.” “No tits!” “I’d have said, ‘Miss, you know Halloween is over, right?’”

I was boiling. Reading my book was a lost cause; even if I’d been able to concentrate, the pages were too twisted in my hands for legibility. I tried to remind myself that you were just kids, but that meant nothing. Your offhand hate sliced my guts.

As we approached the station, I hoped you would get off, but you showed no signs of moving. I knew I had to switch cars for my own mental health. The train began to slow slightly, and I rose, poking my head into your space to interrupt the still-lively debate.

“Please,” I said, making no effort to disguise my voice, “keep in mind that people can hear you.” The silence that fell over your group was the most satisfying thing I could have hoped for. “Oh,” breathed Braids. That’s right, I thought, I’m one of them. “Thank you,” I said, moving to the door. “That was the most despicable thing I’ve heard all day.”

Stalking to the next car, I slid into a new seat and rode to the next stop—my transfer. I began to regret saying anything, or saying too little. Had I given you cause to rethink your prejudices? Or had I merely cemented your conception of trans-women-as-scary-men? I wanted to flash back two minutes and offer to have a dialogue if you were more interested in getting answers than belittling other humans. But that would’ve been met with silence, I was certain.

Getting off the train, I saw that you all were exiting, too. I stayed behind you, not wanting to cause a scene or invoke any retaliation. You seemed to still be laughing, though; I didn’t want to know why anymore. We climbed the steps and I watched you peel off, some transferring, some leaving for home. I began to wonder what home was for each of you. Who had raised you? Who taught you to hate me and my sisters, brothers, and siblings before you’d even met us? Was it even a person, or was it society? Were you big fans of Silence of the Lambs and Ace Ventura: Pet Detective? Did your guardians call Caitlyn Jenner “Bruce” or did you pick up transmisogyny from radical feminist Tumblr blogs?

In the end, I don’t blame you for wounding me—not entirely, anyway. You learned those reactions and opinions from someone else, maybe a lot of someones. And it’s them I blame. I’m glad that perceptions of trans people are changing among young people, but we have a long way to go, and adults who cling to their bigotry fight us every step of the way.

Helping cis people find acceptance and love for us is one of the main reasons I started this column, and continue to do this work. But part of me is scared that I’ll be dead before anything really changes for the better.

So if you’re reading this, and you remember me: prove me wrong.