I Married A Man and a Woman 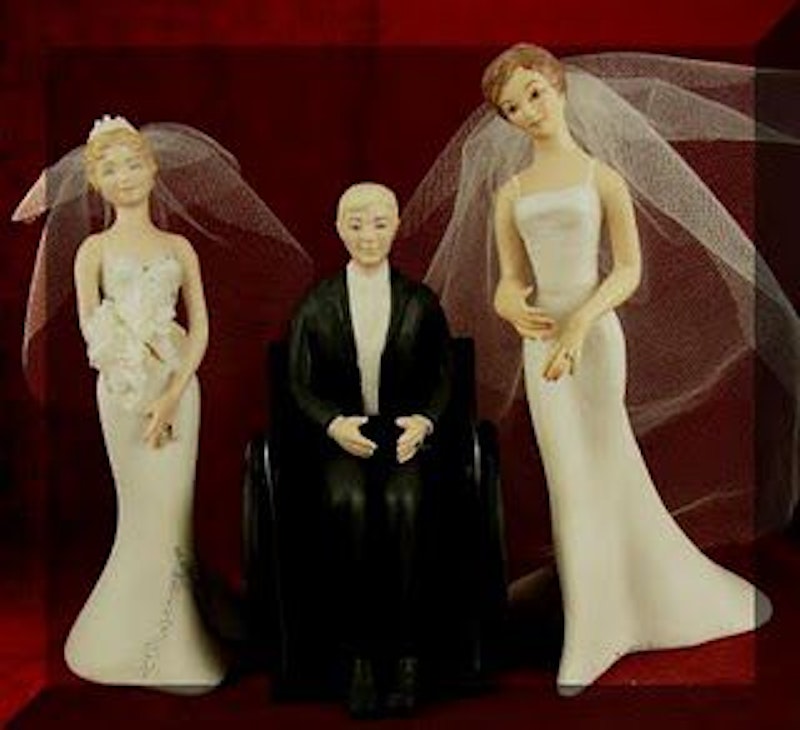 I got married to an amazing woman this year. It was a long, twisting path to get to that point; here’s the abridged version.

A few weeks before the wedding, I was using the copy machine at my former job to make personal copies of my final judgment of divorce. My divorce was final only weeks before my wedding. The copy machine wasn’t working, and the receptionist was trying to help me. When it was finally done, she picked up my copies and said, “Are these yours?” And then she looked down at them. Her first words were “You were married?” and then “To a man!”

Yes, I was married to a man. Apparently this revelation blew her mind. It took her 20 minutes to recover. It’s something that isn’t talked about very often. I don’t know if people are afraid that it will undermine the choice-versus-biology debate. I don’t think it undermines anything, but who wants to try and explain this to people who already don’t get it?

I was married to him for a little over a year. We separated when I was 26 years old. I won’t get into the annoying issues of divorce law, but let’s just say that it took a while to be finalized. We started dating when I was 19. At the time, it made me feel rebellious and mature to move in with my boyfriend after only three months of dating. As time went on, living with him just became… habit. I couldn’t imagine not living with him, especially after more than six years. He was a great guy who I enjoyed spending time with, so there was no reason to change anything. I avoided the idea of getting married, always saying I wanted to finish my degree first. So when he asked me to marry him the day I graduated, in front of my whole family and his… well, what could I do?

I get asked a lot of questions when people find out that I was married to a man. Mostly about how I went so long without “knowing” I was gay. Some people are more judgmental about it, asking how I could have “lied” to him for so long, why I would “pretend” to love him, or if maybe someday I will “go back” to men. I usually struggle to answer these questions, because it means admitting a lot of really scary, screwed up things about myself.

I stick to the fact that I didn’t pretend to love him. I just didn’t truly understand what that should feel like. I cared about him. I liked having him around; we had fun together and liked similar things. He treated me well, and I knew he would be a good husband. I didn’t think I would find anything better. I figured, why not marry someone like that? So what if we only had sex every six months and usually only because I felt obligated. Actually wanting sex? I only remember that happening a few times during my “hetero” life, and it was always disappointing. I honestly thought that was normal.

In all the “normal” relationships I was exposed to, the man annoyed the woman and she put up with him, and occasionally had sex with him because it made him happy. Or, the man controlled the woman, and she had sex with him because she had to. Sex was power and control. I had something guys wanted, and I felt empowered by being able to decide when and how I would use it. Looking back, I feel a strange combination of guilt, shame, sadness and pity. The only enjoyment I got from sex was a sense of control. I viewed my body as a weapon of sorts, something I could use to my advantage. I had no idea that I was actually allowed to enjoy sex.

When I look back on my teenage self, so many things make sense. In high school, I dated the boys who liked me. I remember being obsessed with certain female actresses, musicians and celebrities, focusing on impressing female friends. I remember at age 14 writing in a journal about thinking I might be attracted to girls, and my mother finding it, reading it, and flipping out. Making rules that I couldn’t be alone with any of my friends, couldn’t sleep over at a girl’s house ever again, kicking me out of the car (which was a common location for serious talks) and making me walk home. I never brought it up again, denied it, and it was soon forgotten. My mom claims she doesn’t remember that ever happening. My father remembers it very clearly. He also says he remembers me bringing it up once when I was even younger, maybe 11, and again, dropping it because of my mom’s reaction.

In any case, I married a man. It seemed like a good idea at the time. I knew that I was settling. I knew I wouldn’t be happy. Hell, I spent the night before my wedding Googling divorce laws in New York. But I think those two failed attempts at admitting my attraction to girls had me pushing it so far down, that it didn’t even occur to me that I’d be settling because I was with a man.

I remember when I finally decided to come out. I had a good friend who was a lesbian, who’d occasionally flirt with me, mostly as a joke. Over a very short period of time, it became less and less of a joke. She told me she wasn’t wasting her time on a straight married woman. I responded that just because I was married to a man, that didn’t mean I was straight. I don’t know why I said it. But it was the first time I’d admitted it to another person, and couldn’t take it back. It shocked me, and suddenly, I felt… free. I felt like I could suddenly understand so many things in my life. It all made sense. The next morning, I woke up to this combination of confusion, anxiety, and joy. I knew I couldn’t stay with my husband. I knew that “not straight” meant “I’m 100 percent gay.” I don’t know why. I just knew.

A week later I left my husband. The strange thing was, he knew why, almost immediately. I told him I wanted a divorce; that it wasn’t anything he did wrong and there was nothing that could fix it. He said, “Because you’re gay.” I was shocked. My dad had a similar reaction, actually saying “I was wondering when that would come up again.” My mother wasn’t thrilled. It took her awhile, but now we joke that she loves my wife more than she loves me.

I dated my friend for a while. It lasted about seven months. I think I stayed with her longer than I should have because I was determined not to make it look like leaving him was the wrong choice. But I knew I was a lesbian. This tends to confuse people. People just can’t understand how you could go from living as a straight, married woman, to a lesbian. They think it makes you a completely different person. I look at it more like I am finally myself. I’ve gained confidence, self-awareness, and a refusal to be anyone but exactly myself ever again. I’ve found someone I actually love and want to have a life with. I am able to be honest with myself, and that makes the world a much more vibrant place, with more opportunities to discover.

It wasn’t easy. It was terrifying, confusing, and painful. But I’m married to a wonderful, beautiful woman whom I love with all my heart. I wouldn’t trade that for anything.