I’m Voting for This Guy

And ignoring all those campaign signs. 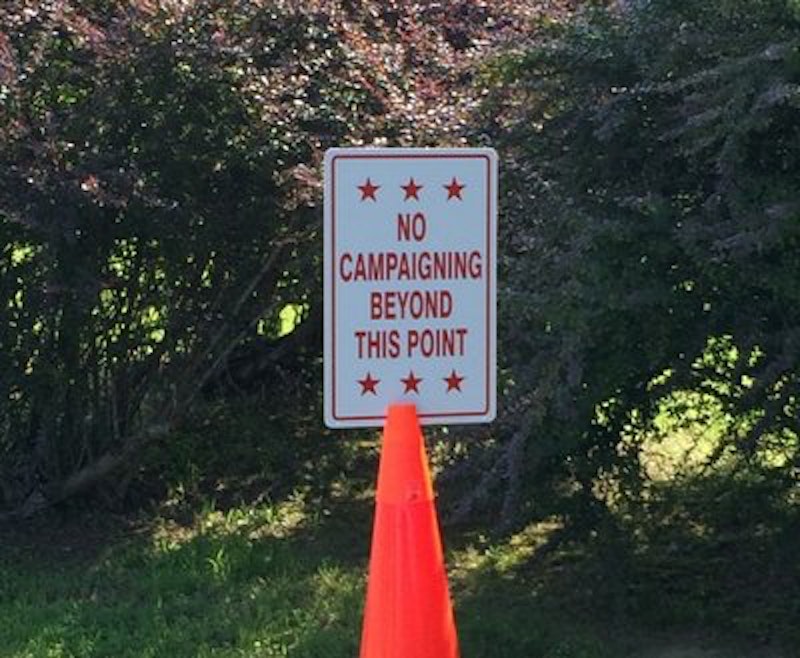 It’s election season in Maryland and the primary is next week. I’m sick of the thousands upon thousands of signs cluttering the roadways and yards all across Maryland’s Eastern Shore.

This week, my kids had nature camp at the environmental center about 30 minutes from our house and I decided to work at the local library nearby. As I pulled into the driveway, I saw a tunnel of wall-to-wall campaign signs; a quick count yielded over 325. There were candidates waving and smiling. I cringed. But I was reminded (by more signs) that early voting had begun, so I figured I’d stop in and vote before finding the “quiet room” (quotes necessary) at the library.

There’s a law that says a candidate cannot campaign within 1000 feet of the polling place. Orange traffic cones marked the boundary. As I approached the library steps, I saw an older man enthusiastically waving a handmade sign. Hmm, I thought, he’s going to get busted. He had to be in his late 70s or so; he wore a frowned expression of frustration, exhaustion.

Then he approached me.

“Don’t you think there should be a book drop-off right here in this spot?”

“Sure,” I said. “Our library a few towns over has a book drop-off.”

“Senior citizens should be able to drop books off when the library is closed without having to go up and down these steps!” he exclaimed, pointed to the three offending concrete steps bordered by iron railings. I agreed again. “Is this an issue we are voting on today?” I asked, realizing as soon as I said it that local referendum issues would be on the general election ballot, not the primary.

“No, we shouldn’t have to vote on it,” he said, wrinkling his brow, looking dejected. “It’s just common sense that there should be a book drop-off right here in this spot!” I agreed wholeheartedly. I have massive old-man crush syndrome and immediately am enraptured any time an older man starts telling “back in my day” stories. I could listen all day. I spent an hour the other day listening to tales told by an 85-year-old landscaping consultant who was retired from the world’s biggest chemical company. I adored the curmudgeonly judge I once worked for. I interviewed the older man who is the drawbridge tender on the island and learned much about his 30-year career at CNN. I wish writing a book of old man stories was my job. I’d love to interview the book drop-off guy and find out why he is so passionate about his cause.

I smiled at him, thinking that the first candidate from this dump of 325 signs to publicly endorse the library book drop-off would earn my vote this year. He seemed disappointed I didn’t want to argue the finer points of book drop-off opposition so that he could passionately defend them.

The front door of the library opened and an employee approached, giving me the oh-it’s-just-this-guy eyeroll, and I walked inside before I had to watch her ask him to leave.