Far-Off and Look Away

Notes on a found photo. 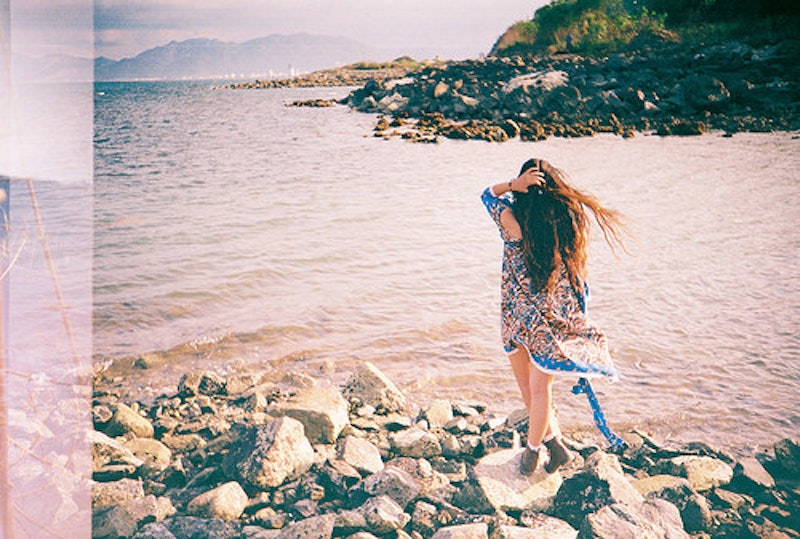 You be Deborah Kerr, I'll be Burt Lancaster. I'll pull you to the sand, my hands in your hair. That kiss, like nothing else. The waves atop us. "Why would you do that?" you ask. "I don't have any other clothes! There's fucking seaweed in my hair! Get off me!"

Operation Crossroads was the first test of nuclear weapons the U.S. conducted after obliterating Hiroshima and Nagasaki to end WWII; two bombs set off in the Bikini Atoll during the summer of 1946. 95 ships were positioned near the atoll, including the USS Saratoga and Admiral Yamamoto's own Nagato. Many were loaded with fuel and ordinance. Some had goats on them. All were sunk, destroyed or contaminated by radiation. The first bomb, Able, exploded 520ft above the ocean. The water temperature under the blast rose by almost 100,000°F. The Navy officers and researchers stationed on Bikini Atoll built a tiki bar, The Cross Spikes Club. They drank and played ping pong while the ocean burned.

Hipster Penelope, in hiking boots and designer dress, staring off the rocky jetty, looking for Odysseus. So adorable, how she stands. The wind knots her hair. Ithaca on a nearby shore. All day she knits and unknits a Team Zissou hat. “I should totally Instagram this.”

As a kid I spent my summers in south Jersey, Sea Isle City, where my mom’s family had an old house across from the Spinnaker Condos, an ugly corporate complex in an otherwise quiet beach town. Once I sat on the beach while my mom roamed the boardwalk. It was early morning, and the beach was empty except for a few fishermen down by the water and a girl on the jetty who was working on a something in a big sketchbook. Huge gulls above. A hazy sun. Now and again she’d look off in my direction, and I was convinced she was drawing my portrait. I’d end up on a museum wall, like one of the splotchy impressionist works I’d seen in the National Gallery when my mom took me there the summer before. Don’t move. This is art.