I'm Not Greedy, Just a Coward About Failure

The things you learn about yourself. 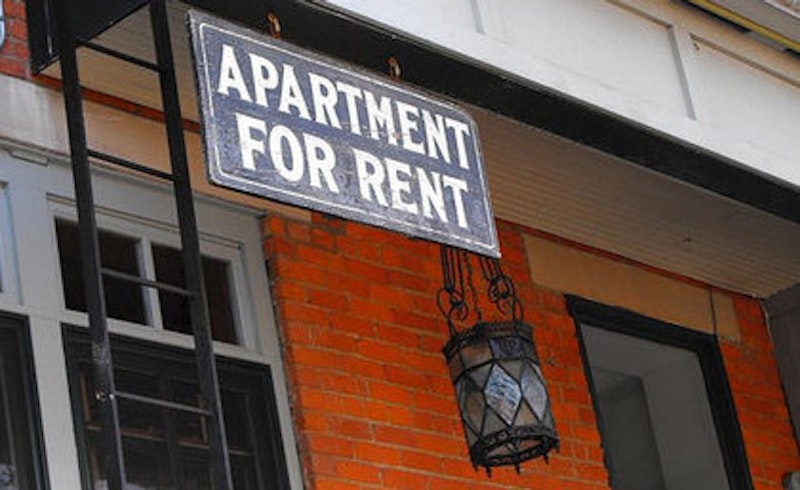 The apartment cost too much; I knew that. But I wouldn't lower the price. Doing so would mean marking a defeat up on my core card. A neat summing-up point would’ve been provided: Here, I am, spending $800 to get rid of an apartment, and I took the apartment to save $600. Those were pretty much the figures involved. Not big stuff. But if I tripped that $600 figure, I was putting a foot wrong; leasing the apartment would be officially ranked as a mistake.

From this idea I derived a second, namely that as long as I was not putting my foot over $600 I was not making a mistake. A silly way to think, and I should never have tried charging people a rent that was too high. I should’ve looked at my own preferences. A price that would make me—or anybody—look around this little nook and think, “Happy to be here.” That's the price I should have put in the ads.

Not that I was leaving because of the rent, or even the apartment, a decent spot with white walls and wood floors, though the floors are scarce and the walls came too close for many of my prospective lettors. (What I mean—the apartment is small.) I was leaving because of a yoga studio I wanted to go to every morning, one in a neighborhood across town. But I'd always known the rent was too high, and then I went ahead and asked for that same rent. Brain dead.

Let me stress that I began advertising March 1 and received no replies for eight or nine days. That should have told me. Instead I thought, “Oh, things will pick up as people get near the deadline.” Things did pick up, but that wasn't saying much. I wasn't getting enough responses to have a shot at a deal. A few decent, stable people in mid-month talked to me about liking the place (a young woman who teaches writing mentioned the floors) and took for granted that sub-letting meant paying in advance. But they mentioned other options, and they went with those. The late-month customers, who were quite a mixed bag, all had other options too.

I'm told the market is soft this year because of local political business. The man who runs my building says the ripple effect screwed the apartments market for me. A fellow at my current yoga place—he rents apartments for a building as his day job—tells me this time of year is always bad.

At any rate, I know I was asking a price I considered too high, and I know I didn't change gears until the old approach had been failing for weeks. Then I edged the price down. Drop it 50 bucks, bring it up again by 30. The equivocation and fiddling because I couldn't face a fact: I was going to lose a good chunk of money because I had chosen one apartment when I might have chosen another.

As of March 7, the price for that apartment should have been $550, all included. Yes, I would have lost $120 every month that the sub-lettor was there. But why not? I had lumbered myself with a burden, and now I would have offloaded 82 percent of the burden's cost. But thoughts like that never crossed my mind; they weren't allowed to.

When I first signed up for my high-priced little apartment, I had a talk I gave myself. Under my particular conditions, I figured (and these conditions were quite odd), it made a particular kind of sense to rent this high-priced little wedge of space. But when it came time to sub-let, that talk had vanished from my head. I assumed that anybody's conditions made the apartment good enough.

Now I'm losing piles and piles of money, and I tell myself it doesn't matter so much. After all, I have plenty of other money. True, but that means that, back when I was grubbing with my price and worrying about the loss of $300 or $400 or $500, I was grubbing over matters that I don't really care about. The money didn't matter so much; I didn't want to lose it because then I would feel stupid. The fear of being stupid paralyzed me, and here we are.

Well, the things you learn about yourself.