I’m Fully Conscious of My Cruelty

An attempt to draw attention to hypocrisy of American “exceptionalism.” 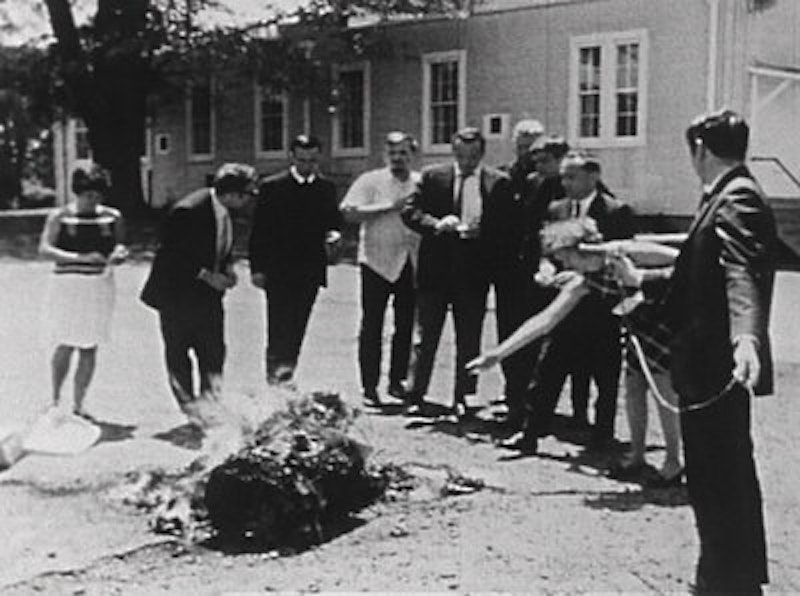 Back in 1967, a philosophy major from UCLA known as Bobbie Gentry had a big hit with “Ode to Billie Joe,” a dark and enigmatic number that she called “a study in unconscious cruelty.” Cruelty, both conscious and unconscious, is all the rage in the USA today. Self-styled “progressive liberals” assert that words are equivalent to physical violence and deserving of a physically violent response. This is how civil wars get started. The first casualty of a civil war is civility.

Since declaring independence from Great Britain in 1776, the USA has seen just 21 years of actual peace. The longest stretch was during the Great Depression. It takes a strong stomach to study history. Human history is like a cheap horror movie: long on gore and predictable dumb moves, short on common sense. What’s most horrifying about America today is our level of narcissistic self-absorption as we lay waste to nations that’ve never lifted a finger against us. We’ve created the greatest refugee crisis in human history, displaced an estimated 65 million people, and here at home, we bicker endlessly about gender and race. I’m certain that the residents and former residents of the seven countries we’ve gratuitously destroyed in the past 16 years wish they had the luxury of indoor plumbing, let alone debating about who gets to use it. Contraception and abortion are non-issues to people who live in genuine mortal dread of flying robots dropping out of the sky to kill them at any time. Drones don’t care what gender you are. All human beings are equal when the metal meets the meat.

I’m reminded of Daniel Berrigan’s statement to the court in the Catonsville 9 trial:

Some 10 or 12 of us (the number is still uncertain) will, if all goes well (ill?) take our religious bodies during this week to a draft center in or near Baltimore. There we shall, of purpose and forethought, remove the 1-A files, sprinkle them in the public street with homemade napalm, and set them afire. For which act we shall, beyond doubt, be placed behind bars for some portion of our natural lives, in consequence of our inability to live and die content in the plagued city, to say "peace" when there is no peace, to keep the poor poor, the homeless, the thirsty and hungry homeless, thirsty and hungry.

Our apologies, good friends, for the fracture of good order, the burning of paper instead of children, the angering of the orderlies in the front parlor of the charnel house. We could not, so help us God, do otherwise.

As the Vietnam War spiraled into chaos, the nation fractured and divided, and public opinion swelled against the war. In the early 1970s, anti-war sentiment was front and center on every campus in America. Everyone was engaged with the war. Step onto any college campus today and try to find any evidence that there’s a war on. Today’s college student is more worried about “safe space” and “microaggressions” than getting their brains blown out in some stinking jungle defending America’s share of the world’s heroin supply.

If that’s cruel, rest assured that I’m fully conscious of it. If I offend, it’s to draw attention to the flaming hypocrisy of American exceptionalism and the idea that we have the right to impose our dysfunctional multiculturalism on the rest of the world by force. We have so many problems to solve domestically; it’s ridiculous to think that we’re an authority on social justice. Black people in this country have been treated like shit, and nobody’s helped them. The USA continues to violate its treaties with the First Nations of this land, and nobody’s helped them. As long as the injustices against the people already living here persist, we have no business attempting to absorb more “diversity.” The LGBTQ crowd already has its hands full dealing with the bigotry of the Born Again crowd. Adding a nice big chunk of homophobic Moslems to the mix isn’t going to improve that situation.

Americans need to sort out their own problems. We’re in the opening stages of a civil war. The violence that’s coming home to roost is the fruition of a long harvest. We’re addicted to war. That addiction is the root cause of all of our other problems. At this point, any non-violent tactic that draws attention to the atrocities committed in my name, using my tax dollars, is acceptable. Daniel Berrigan was a saint. I’m not Berrigan. I’m a gremlin, a Yippie: I’ll shit on the carpet at the Ambassador’s dinner, like Harold Pinter. As the song goes, “Me, I spend a lot of time pickin’ flowers up on Choctaw Ridge, and throw ‘em into the muddy waters off the Tallahatchee Bridge.”