Scenes From a Distant Time 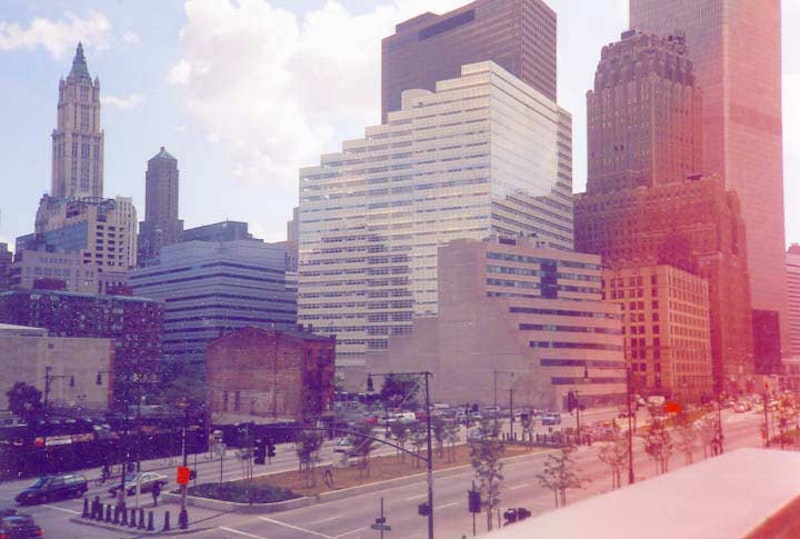 I began photographing for forgotten-ny.com in 1998 and the first pages went up on March 27, 1999. I waited until I had a substantial amount of work done and several pages composed before I launched the site; nothing frustrates me more than visiting a website only to find that many pages are not ready or under construction. The site is still going strong 18 years later and I have been fortunate enough to write or co-write two books.

I shot the first few years of Forgotten New York with a 35mm film camera before turning to a series of digital cameras (I now use a Panasonic Lumix with an 18X zoom, though I find the colors to be richer on film than digital). I was quite the amateur photographer when starting out and many of the photos I got were unusable for the website or my first book because so many were in shadow or partial shadow; I re-shot most of the photos for the book using black and white film.

I took some of my snaps out of the closet the other day, as I do periodically, and decided to separate about 70 photos from the rest, based on whether the depicted scenes are no longer available or have significantly changed. I’ll show a few of those today.

I got the photo at the top of the article, which looks south on West Street from Warren Street, in 1999 from a pedestrian bridge. The familiar Woolworth Building is on the left, but in the left foreground we see one of the last of the old walk-up tenements left on West Street. It had stood alone since most of the blocks in the area were razed during and after the completion of the first World Trade Center in 1974, and it stood for a few more years, eventually succumbing to the residential-retail complex 270 Greenwich, which is home to a Bed Bath & Beyond and a Barnes & Noble among other chain stores. Its construction also took out a dead-end remnant of Washington Street and necessitated the move of a landmarked bishop crook lamppost to the opposite side of Warren Street from where it was originally located.

Further south on West Street we see the trapezoid, ziggurat-shaped 101 Murray Street on the corner of West. It was constructed in 1983 and was the Manhattan home of St. John’s University for a few years before it was razed in 2015 after standing for just 32 years. Currently, 111 Murray, a luxury tower, is rising in its place.

Looming over all on the right is one of the first World Trade Center towers, destroyed by Islamic terrorists on 9/11. 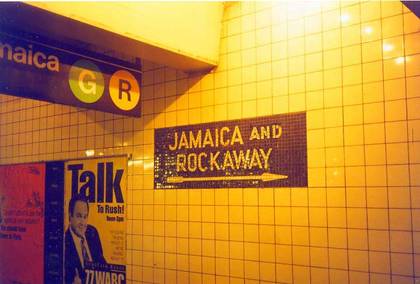 I took this one in the pedestrian concourse at the 65th Street station on the Queens Boulevard IND line, currently serving the M and R trains. It’s immediately apparent this is an older photo because the G ended service to this station in the 2000s when the V was routed onto Queens Boulevard and then replaced by the M in 2010.

However, why does the sign say “Jamaica and Rockaway”? None of the Queens Boulevard trains go to the Rockways; the A train, which travels under Fulton Street and Pitkin and Liberty Avenues and then crosses Jamaica Bay on a trestle, has that job. It turns out that the builders of the Independent Subway were anticipating a spur line that would deviate from Broadway (the street under which this section runs) at Roosevelt Avenue and travel south through Queens and eventually meet up with the bridge crossing Jamaica Bay. However, when the Depression and World War II struck, the so-called IND Second System was never built. Another level at the Roosevelt Avenue station was built, however, but is now closed off.

This tiled sign was covered over shortly after I shot the photo. However, 65th Street has another relic still in plain sight: tiled directional signs pointing to Rowan Street, 65th Street’s old name. Not only that, but newer black and white signs were produced fairly recently, including Rowan Street. The name was changed sometime in the 1920s. 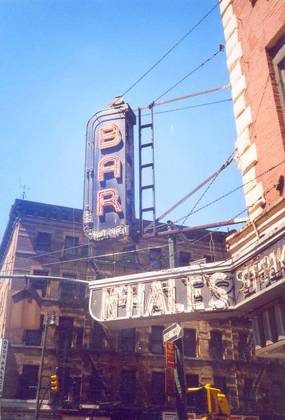 McHale’s Bar and Restaurant, and its magnificent neon signs, stood on the NE corner of 8th Avenue and West 46th Street for 62 years before the property landlord forced it out in 2006. A luxury condo now stands in its place, with a Pret a Manger sandwich shop on the ground floor. In 2007, I was wandering west on West 24th Street near 6th Avenue when I found some of the neon signs being sold in an antique shop. According to the blog Lost City NY, the vertical BAR sign turned up in Emmett O’Lunney’s on West 50th between Broadway and 8th Avenue, where it remains. 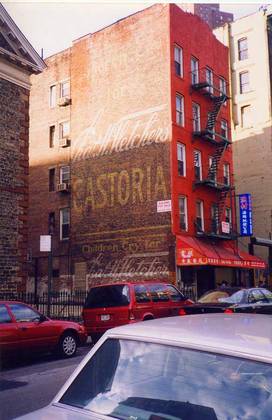 Sharp-eyed observers can still pick out some faded remnants of Fletcher’s Castoria painted ads in spots around town. Charles H. Fletcher began selling his Castoria, a mild stomach remedy for children, in 1871. The medicine was heavily promoted on ads and billboards in the late 1800s and early part of the 20th century, and evidently the paint used for the ads was of a very high grade, because several ads survive to this day all over town. Aerial views, or photos from tall buildings of NYC taken in the 1910s and '20s, show as many as dozens of these painted ads.

The number seen here was located on Market Street between Henry Street and East Broadway; Manhattan has a Market Street, not nearly as important as Philadelphia's or San Francisco’s. It displays the Fletcher slogan “Children Cry For Fletcher’s Castoria.” I took the photo in 1999; the wall was whitewashed a few years later. 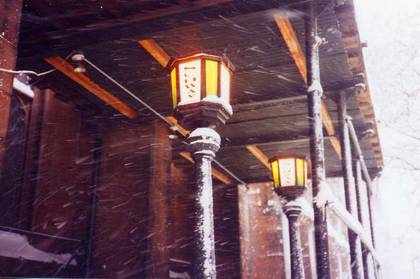 For decades, these octagonal glass-paned signs with green glass panels were standard issue at BMT subway station entrances. The IRT had counterpart signs with blue glass panels. In the 1960s, the MTA installed squarish glass signs with the two-tone “M” MTA logo on them, and most of this type of station indicator disappeared. Finally in the 1980s, globes that were color-coded to show whether the station was open 24/7 (green), part of the time (yellow), or exit-only (red) were installed. Today, green globes are found at most stations, or white globes with green “hats.”

This particular pair, at Montague and Clinton Streets at St. Ann’s Church in Brooklyn Heights at the Court Street station, was somehow spared until 2016, but they’ve been replaced by standard white and green entrance lamps. There was another pair here that was also replaced. 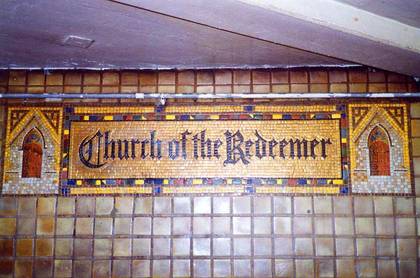 The 4th Avenue-Broadway BMT subway was installed from 1915 to 1916 and in two of the stations, there are magnificent mosaics that commemorate churches found above. One of them, for the Church of the Holy Trinity, is at the Court Street station and can be found by the “token booth” at the station entrance just below the old Montague station entrance lamps shown above. The Church of the Holy Trinity since merged with St. Ann’s Episcopal and now has a dual name, or simply St. Ann’s.

The other one, shown above, commemorates the Church of the Redeemer and can be found at the Brooklyn-bound station entrance/exiit at 4th Avenue and Pacific Street, serving the Barclays station, formerly known as Pacific Street. The church advertised by the mosaic was razed in late 2015-early 2016. It did not have protection by the Landmarks Preservation Commission, even though the Gothic-style Church of the Redeemer was built in 1866 and was designed by preeminent ecclesiastic architect Patrick Keely, who generally worked on Catholic church commissions. Maintenance had been deferred over the years and the church, which served a West Indian and Caribbean congregation, had incurred $4 million worth of repairs—prompting the Long Island Episcopal Diocese to close it.

Both signs are magnificent examples of mosaic sign production, with the church names in ornate blackletter and different color tiles standing in for stained-glass windows.

Can you imagine the modern MTA producing signs like this for churches today?