For Once, Everything Worked Out

A chance encounter on the streets of Quebec. 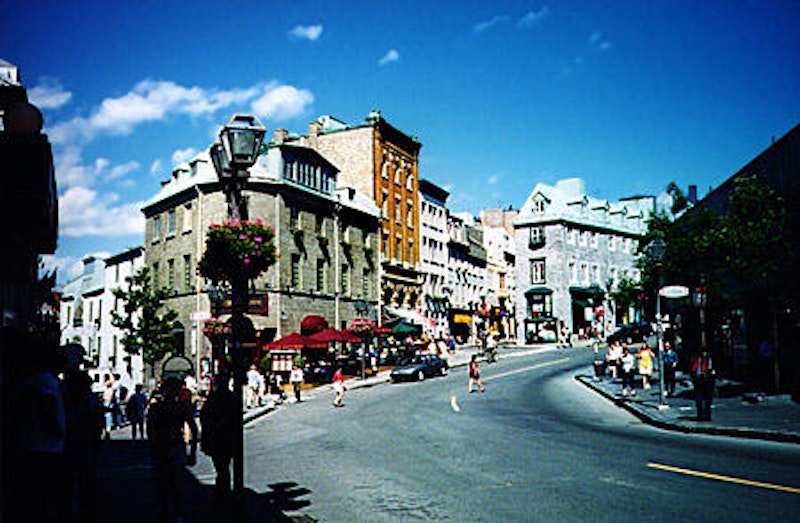 There’s been just one moment in my life when I faced up to a difficult social situation and carried it off. Normally I scrape by or else don’t quite scrape by, and often enough I’ve just been lost, stuck there on a hook and waiting to be released from events. That’s how it feels, anyway.

But this time everything worked. Because of me the right thing happened and people felt good. Let me stress that I didn’t know anyone involved. I had to guess what was what, then execute. It worked and I felt like a human among humans, somebody who understands what everybody else does and belongs among them.

The situation just sprang up. I live near a crossroads in a big city, an area with bars and clubs and mediocre restaurants. On a Friday or Saturday night the block between my favorite cafe and the aforementioned crossroads can be packed with people and cars. So, on a weekend night in 2007, I was threading my way down the block from the café. Cars were honking, lights glaring. I was on the ragged edge of the sidewalk, meaning that the sidewalk proper was filled deep. Boys and girls waited on line, clumps of people charged along. I had to pick my route between them and the cars; you do that kind of thing when you’re alone most of the time. I had my laptop balanced on my shoulder because that’s easiest when I’m moving fast.

“Lui, la! Oui, avec lo!” a woman said. That’s French Canadian for something like “Yeah, him! With that one!” (The neighborhood draws people from all over the city, English Canadian and French Canadian.) I had just stepped onto a clear patch of sidewalk, right before the crossroads and its traffic light. This was good because I could cross the street and get to my apartment without darting straight into traffic. But the corner is also where a café lets out, a place that is especially crowded on weekends. I was passing it, my eye on the cars, when I heard the woman’s voice, and I turned around. You overhear these voices and it’s fun to check out whatever scene you’re passing.

I found a knot of five or six women gathered expectantly around me. I guess they were a group of office workers, in their late 20s and early 30s, and they trailed balloons and colored feathers and they blew the blatting little noisemakers you see on New Year’s Eve. I’m not kidding. The Quebecois do this sometimes when a girl is getting married. She and her pals get together and march from joint to joint, a bachelorette party but one with special adornments: that is, the balloons, feathers and noisemakers. The idea isn’t just that they’re celebrating but that they’re shaking things up, saying to hell with the rules.

In this case, the girls wanted their friend to sing to me. I gathered that in stages because they didn’t know I spoke English and at first I just had to listen to chatter. Finally the bride herself laid out the situation. I stowed my computer under my arm and listened to her, and she picked her way from word to word, someone doing her best in a foreign language. She was a small woman, 28 or so, slender, not pretty. People talk about Quebecois women being good looking, but most of the beauties I’ve seen up here have been English Canadian. The French Canadian women do have certain standard, distinct facial types that crop up, but these aren’t necessarily pleasing. Some are too broad and mug-shaped, some are narrow, even pinched, with nose and chin stretched long and the other features shrunk down.

This girl had a face like that, a face a bit like the seed for an unknown plant.

She was a small, neat creature with not much meat on her bones and a tiny mouth, and she struck me as good-hearted and serious at the same time. That’s why people think French Canadian women are such hotties; Look at one and you realize how sweet and admirable a long-chinned, little-mouthed, seed-faced small woman can be. You feel very good for being around her, and if you’re like me you wouldn’t mind reaching out to touch her. Of course, being me, you would probably have run before that. I would have run, but there were too many people with her. Maybe groups have gravitational pull; there’s all that disappointment you leave in your wake if you don’t play along.

The girl explained, and I said yes, and she began to sing. It was “Twinkle, Twinkle Little Star,” but in French. She was getting through the assignment as best she could, basically just checking the box: Hey, it was a song and she sang it to me. I felt that made sense; I was on the spot too.

I looked around. Her friends were standing there just past my shoulder, and they were all smiling, eyes on their friend. It was an odd moment. Normally you can’t look into the face of one stranger after another; they wonder what you’re up to. But they knew what I was up to. A stranger sang me to and I wanted to get the lay of the land. Meanwhile, they just seemed happy for their friend. They were chunky, not especially well-favored women, and their balloons and horns and feathers seemed a bit weary when you reflected that the girls had to go out and make their own fun, that gallant men weren’t springing up to help them. I’d say the bride was probably the best looking of the group.

She finished. I leaned down toward her. “Thank you,” I said. “That was very good.” Looking back, I wish I had said, “That’s the first time anyone ever sang to me,” which was true and would have been romantic. But like the girl I was keeping it simple. “Give me a kiss,” I said, and I leaned in even closer. I wanted to kiss her on the lips. I thought, Why not? But she allowed me just a kiss on the cheek. It was a good one, though. Her head turned, her cheek and throat lay bare, and I kissed her near the corner of her jaw. I kissed her again, on the other side of her face, and she cupped my arm.

“All right,” I said, looking down at her. From the corner of my eye I saw her chorus of friends beaming. The traffic light changed and I sprinted between cars and out of sight, laptop still under my arm. I felt lucky that the light changed just then, because I had no idea what else to say. There wasn’t much chance I could have handled the situation in any way but hit and run. But events broke right and I had my moment. For once everything worked out.