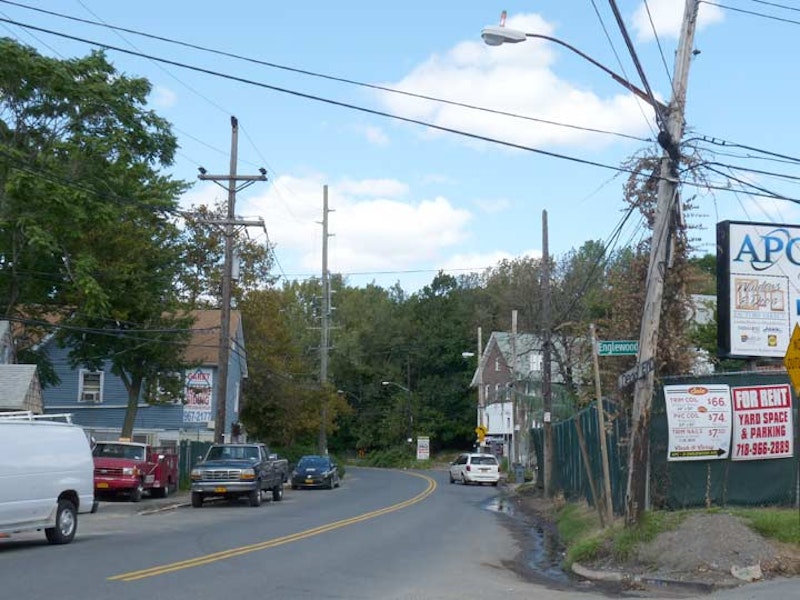 For newbies the name “Arthur Kill” requires explanation. It has nothing to do with the murder of any fellows named Arthur; it’s an English bowdlerization for Dutch words for “the other strait,” as opposed to the Kill Van Kull, which means “the strait that goes by the Kul, the Dutch name for Bergen Point, which is now Bayonne. The Dutch word kil in this context is also used for Newtown Creek tributaries English Kills and Dutch Kills.

Arthur Kill Road runs from Richmondtown to Tottenville and is a western extension of Richmond Road, which extends eastward almost all the way to the Narrows, so to travel on Richmond and Arthur Kill Roads (which I do somewhat regularly on the S74 bus) is to travel a colonial-era route that was likely built on a Native American trail. In the 1600s and 1700s, these trails were straightened somewhat and beaten regularly by stages and wagons carrying goods, weapons, and mail from one colony to the other; numerous ferries carried traffic to the mainland.

In the 20th century, somewhat smoother rides to southern Staten Island were constructed such as the West Shore Expressway and Korean War Veterans Parkway (formerly the briefer Richmond Parkway) but to travel on the older roads like Amboy and Arthur Kill Roads is to nearly repeat the journey those stages and wagons of old must have endured. Arthur Kill Road, in particular, still extends through stretches of undeveloped woods (much less, however, than when I first rode the S74 in 1972). Formerly isolated communities have been knitted together by knots of tract housing.

A small community known as Charleston (or by its older name, Kreischerville) however, resists such modernization. It can be attained by driving to Arthur Kill and Sharrotts Roads or by the West Shore Expressway to Exit 3, Bloomingdale Road, then a short distance along Arthur Kill Road to Sharrotts. I, of course, take the S74 to Sharrotts and then walk along the sidewalk-free streets to a place that is New York City in name only.

In 1854, Balthazar Kreischer was building a brick factory in Charleston, Staten Island (Richmond County was then independent from NYC), motivated by clay ground in the area (Clay Pond Park State Preserve is nearby). Kreischer constructed a small company town in this remote corner of Staten Island centered around Arthur Kill Road and Kreischer and Androvette Streets. The brick works employed almost 150 and produced 20,000 bricks per day. Kreischerville was entirely self-contained, with a hotel (still standing at Androvette and Kreischer Streets, now a Knights of Columbus), church, grocery store, and inn. The factory closed in 1927. In the aftermath of World War I, many German-sounding names were purged from New York City directories, and so Kreischerville became known as "Charleston."

There’s an Astoria Kreischer connection. Many of the yellow brick buildings were constructed by developer Gustave X. Mathews, on the streets of Astoria, Maspeth, and Ridgewood, used brick from Kreischer kilns, and in addition, one of Kreischer’s daughters married one of Henry Steinway’s sons. Mathews, however, wasn’t Kreischer’s only client: builders and architects such as McKim, Mead & White, Ernest Flagg (whose own estate is in Todt Hill), Carrere, and Hastings and other still well-known names appear in a 1902 Kreischer catalog. 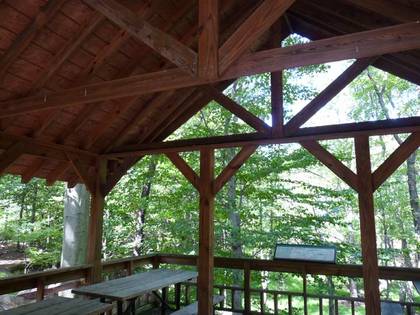 A walk along Sharrotts and then a left on one of the few cross streets, Carlin, gets you to Clay Pit Ponds State Park, headquartered in a cozy little park house, formerly a residence, the only address on the dead end Nielsen Avenue. Inside you will find fish tanks, exhibits, and park information, but importantly, a place to sit down, which you may need after exploring the grounds. There’s also an outdoor shed (pictured). The restrooms are composted; you do what you usually do except flush.

Clay Pit Ponds State Park Preserve is a 260 acre natural area near the southwest shore of Staten Island, north and east of Kreischerville. Once the site of a clay-mining operation, the Park Preserve today contains a mixture of unique habitats such as wetlands, fields, sandy barrens, spring-fed streams, and woodlands. As a terminal point for some northern and southern plant species, the area is rich with a variety of plant and animal life, such as box turtles, kestrel hawks, butterflies, frogs, and black racer snakes.

This was NYC’s first State Park Preserve and it has managed to retain a unique ecology as well as provide educational and recreational opportunities: educational programming is offered year-round for families and individuals. 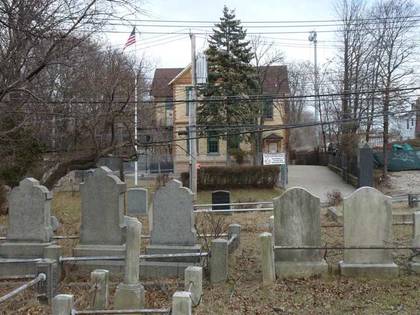 Return to Arthur Kill Road via Sharrotts, carefully cross at the light, and negotiate your way up the sidewalk-free busy route. You will come across an ancient cemetery dominated by weeds, attainable by a set of steps. This is West Baptist Cemetery, with many interred members of the Storer family; the name also shows up on Storer Avenue. The cemetery was associated with the long-gone West Baptist Church, raised in 1847 but long disappeared. Some of the stones have inscriptions in German. The Killmeyer family, of tavern and local produce store fame, is also here.

Directly across Arthur Kill Road from the cemetery is Charleston’s Public School #4, probably the building with the highest concentration of Kreischer brick in the area. It is still used by special education students and well worth a close look. The gate is usually open. 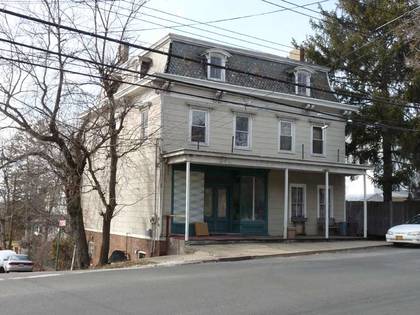 Walk past Killmeyer’s Tavern at Sharrotts and Arthur Kill Roads—that will wait as reward till the end of the walk. You will pass an ancient abandoned building and then, on the corner of Winant Place, there’s what was the original Killmeyer produce market.

This structure was built in the 1870s and still bears hallmarks of architectural trends of the decade, including a slanted "mansard" roof, fish scale slate shingles with decorative rosettes and brackets, and, of course, Kreischer brick chimneys. Until recently there was still a grocer operating on the ground floor. Killmeyer supplied much of the village with comestibles and also ran the aforementioned roadhouse/hotel up the road a bit at Sharrotts and Arthur Kill Roads. 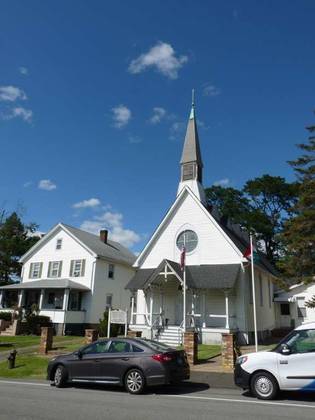 This church was originally constructed by the Kreischer family in 1883 for a Lutheran congregation, St. Peter’s German Evangelical Lutheran Church. It partially burned down in 1890 but was reconstructed to look like the original structure. Since 1916, it has been the Free Magyar (Hungarian) Reformed Church. A piece of paper with an apparent handwritten signature of Balthazar Kreischer himself was recently uncovered in the church. It’s one of the few spots outside the United Nations, and Little Hungary on East 82nd Street, where you’ll see the Hungarian flag flying in NYC.

Note the yellow bricks on the gateposts. They came from the Kreischer kilns and are identified as such with the stamped word “Kreischer.”

Turn left at Kreischer Street and proceed to Androvette. The twin-gabled building on the left is now a Knights of Columbus hall, but was once the Christian Neilsen Hotel, one of two roadhouses in the area catering to travelers passing through. The building dates to the 1890s and also served as the Kreischerville post office for a time.

A quick walk to the right on Androvette Street to #122 will reveal a venerable structure that originally belonged to Peter Androvette, who became president of the Kreischer brick works and later resided in the now-demolished Edward Kreischer mansion. The Androvette family preceded the Kreischers, and the area was once known as Androvetteville. 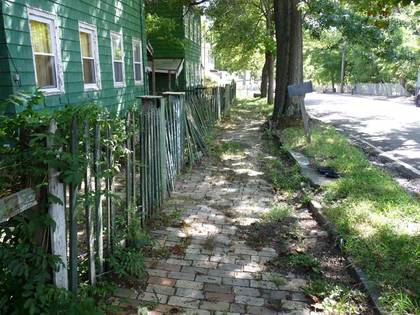 Continuing west on Kreischer Street you see a series of modest, two-story dwellings, lining the east side of the street up to Androvette Street, with green sidings and white window sashes, and picket fences, some in disrepair. The houses were built around 1890 and leased to workers in the brick factory. Old maps indicate there were also similar homes on the west side of the street. I’m not sure when they acquired the green siding; underneath there may be Kreischer yellow brick. The sidewalks are made of the material. 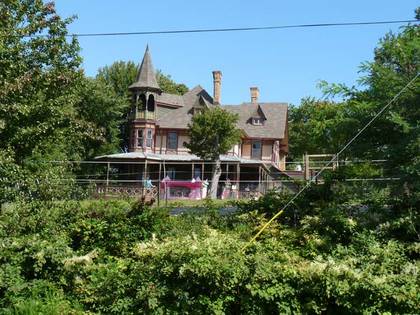 Kreischer Street curves to the left; when it ends at Arthur Kill Road, the Kreischer Mansion comes into view.

In 1850, there were only about thirty scattered dwellings in Androvetteville. Brick king Balthazar Kreischer arrived in the USA in 1836 from Bavaria and was immediately tasked with rebuilding lower Manhattan, much of which had been destroyed in a December 1835 fire. Kreischer was tipped off about the clay deposits in the region by fellow German immigrant Nicholas Killmeyer in 1850. Kreischer returned the favor and set up Killmeyer in the grocery business: his store, as we have seen, is still in place at Winant Place and Arthur Kill Road.

Balthazar's son Charles constructed this grand Stick-Style mansion on 4500 Arthur Kill Road just south of Englewood Avenue in 1885; his brother Edward’s identical building was on the adjoining plot. In the 1990s, it was rumored that George Harrison, who was taking cancer treatments on the island, had expressed an interest in purchasing the mansion, but changed his mind when security concerns became a problem. In the early 2000s the house was completely renovated. The chimneys are made of yellow Kreischer brick.

The mansion has a recent infamous reputation. It was used as a mob-owned restaurant until 1996; in 2008 caretaker Joseph “Joe Black” Young, a hitman employed by the Bonanno crime family, was charged and convicted for the brutal murder of a mob associate in 2005. Over a century earlier, Edward Kreischer committed suicide at the brick factory, and those who believe in ghosts say Edward can be seen roaming the halls of his brother’s mansion. 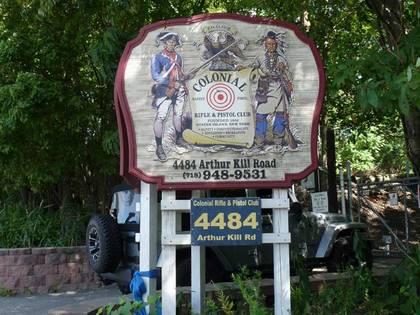 Gunshots are heard as you are walking on Kreischer Street and Arthur Kill Road. You are, however, perfectly safe. The Colonial Rifle and Pistol Club on Arthur Kill road just east of the mansion was incorporated in 1936 and is located on a seven acre wooded plot on Arthur Kill Road. The range is an outdoor facility with a 21-point, 50-yard pistol range with turning targets at 25 yards and a 14-point, 200-yard rifle range with a stepped berm at 100 yards. The ranges are separated by a bullet-proof wall and are operated independently. You need to be a member of the rifle club to participate, and you need to supply your own ammunition. 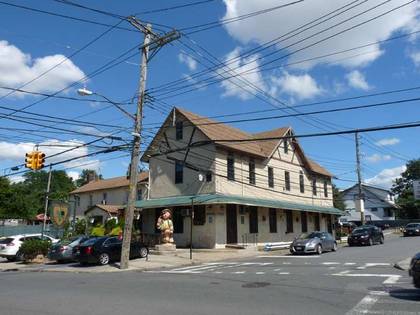 Finish off your walk with some well-deserved drinks and a meal at Killmeyer’s Old Bavaria Inn at Arthur Kill and Sharrotts Roads.

This vintage German-style beer garden at 4254 Arthur Kill Road and Sharrotts Road was built by Nicholas Killmeyer and used initially as a grocery and residence by John Batchelor in 1845. By the 1880s, an addition was built and it became a roadhouse and tavern called Killmeyer’s Union Hotel. The tavern, which is strangely overlooked in innumerable surveys of New York City’s best bars, boasts its original bar and pressed tin ceiling, a menu full of sauerbraten, braunschweiger, and other sausage treats, and dozens of brands of German beer. Oompah and pop bands play on Sunday afternoons and rock bands play the beer garden in the back on summer evenings. Of course there is an outdoor seating area in the warm months. 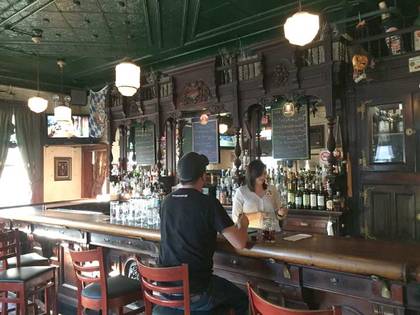 The gorgeous, intricately woodworked bar, built in 1890, is reason enough to visit, although there’s a wide beer selection and highly-rated German cuisine. Fortify yourself for the 75-minute bus ride back to the ferry.