Hiding Out in Amish Country With the Juggalos 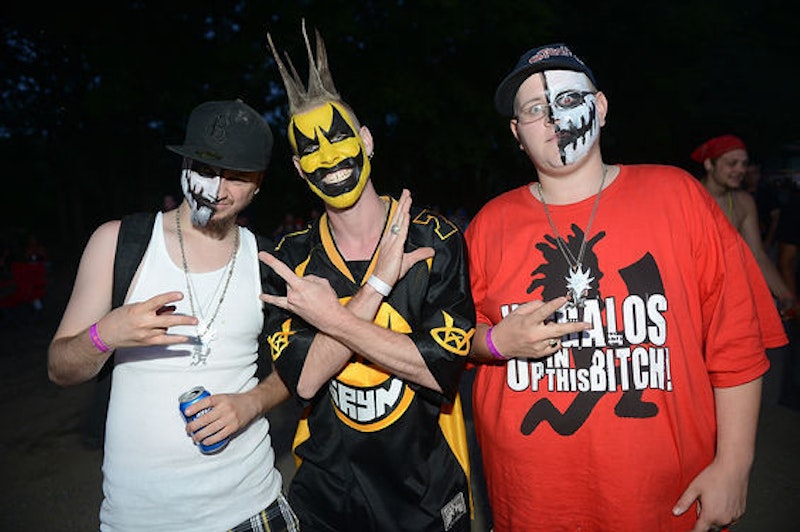 “WHOOP WHOOOOP!” It’s our rallying cry, our siren. From miles away you hear our call—you may be parked in your car, stuck on the freeway on your way to work, and you’ll hear the wind carry the sound of our pomp and our stomp and our total disregard for the Earth. We are its bane, its stage four cancer—we are bleach. But we are diverse—our ranks range in age, race, gender, and species—and we cannot be stopped. Despite an attempt by the FBI to classify us as a gang, we are not criminals or troublemakers. We revel. We are here to wallow in the muck and the mud, to make babies and get married, and celebrate Insane Clown Posse.

It’s a lifestyle: juggalo. And I’ll be honest, I wasn’t sure this would be my thing this time last year. But now, I’m in it. I’m fully in. Ever since my cousin Rooster was nicked and I had to leave Massachusetts, I’ve been roaming Pennsylvania and looking for the Amish country. I would convert, take a vow of celibacy, and not use my phone at dinner. I don’t know. It didn’t work out. I can’t grow a beard or wear all the right white shirts. I drink Mountain Dew and Faygo out of a crusty 7-Eleven Big Gulp the size of a bucket. I do meth in the latrines with large women I’ve never seen before or since. I sit in the pit just to prove how much a boot to the face doesn’t hurt me. Being a juggalo is about love. And God. Jesus Christ, our Lord and Savior, his destiny has brought me here.

I haven’t showered in months. My hack has grown into a dread. I brought no relatives and bear not a trace of my past. No one here notices that I’m a rooster. At least they don’t make a point of commenting on it. Making fun of me. Calling me a “hipster.” Rooster tells you all about the barn, how wonderful it is, how nice his wife Monica is to everyone on the farm. Bullshit. That old bag has had a grudge against me ever since I got stoned on straw-weed at their wedding and fell into a babbling brook and had to be resuscitated by a donkey. It was a whole scene, and Rooster’s never held it against me, but that bitch Monica… I’m glad I don’t live with them anymore.

The best friend, the closest friend I’ve made here—J2B—he’s got a bit of jaundice, an orange hue to his skin. Probably too much bad coke and energy drinks. He’s always wearing a navy blue poncho with a government insignia on it. But with our makeup, we’re the same. We are free. We are comfortable. I don’t have to deal with the daily dispatches of the media and the rumor mill about my under-investigation cousin. He’ll be indicted, sure, but somehow my friend knows him. He told me Rooster did it in self-defense, that he’s innocent. I mean, I thought Weiner was weird, but man, the throat? What an improper use of the spur claw. The only time I ever talked to J2B in depth was about my cousin—every other moment he’s caught in some bad K-hole, repeating over and over “I’m being deported.” Chill, dude—hit this bong. He cries every time, but that’s what being a juggalo is all about. Love.