Riot Season is upon us. 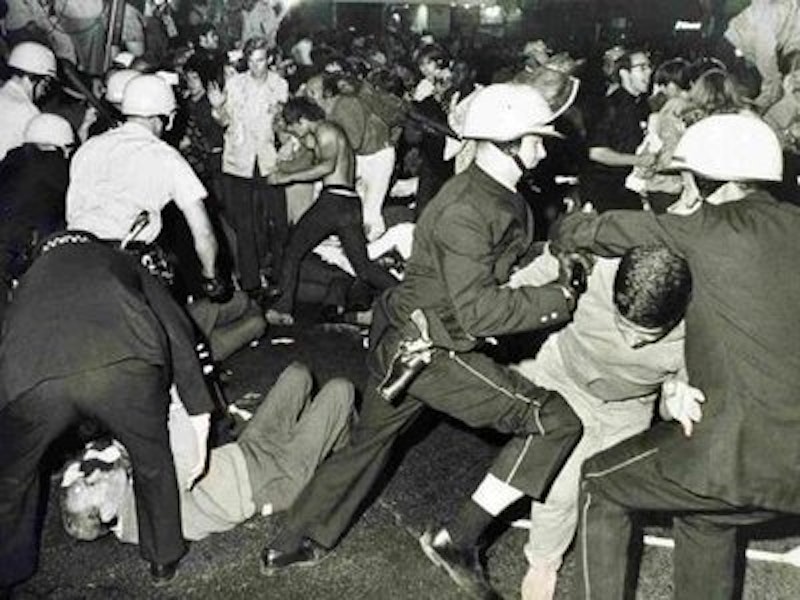 The state-sanctioned violence unleashed upon Donald Trump supporters by Mexican colonials outside the Trump rally in San Jose, California, was a very bad indicator of what’s to come next month in Cleveland. Both the Mayor and the Police Chief belong to La Raza organizations supportive of the Reconquista movement, an effort to retake the Southwestern territories of the USA for Mexico by sheer weight of numbers. The cops stood down and did nothing. One young Trump supporter was hit in the back of the head with a bag of rocks. A white female Trump supporter was surrounded and assaulted by a mob of Mexican men who spat on her and pelted her with eggs. Doubtless they would’ve raped her had she not escaped into the rally venue.

Desperate self-styled pundits who support the status quo have been calling for violence against Trump supporters, some even going so far as to call for the assassination of Trump himself. Employing openly fascist tactics against a man perceived as a fascist is both ironic and unwise. If there’s any veracity to the Craigslist ads ostensibly recruiting anti-Trump demonstrators at $15 per hour, it’s also profoundly stupid. Cleveland is shaping up to be a bloodbath rivaled only by Chicago, 1968.

Whether he likes it or not, Trump enjoys enthusiastic support from the Alt-Right, a newly emergent white nationalist/Paleocon movement organized more around sound theories of cultural hygiene than obsolete racist poppycock. That’s not to say that racism isn’t a component: a cursory viewing of one of the most popular Alt-Right websites, dailystormer.com, would cause most of today’s delicate Social Justice Warriors to spontaneously combust. That site is openly and proudly anti-just about everything near and dear to today’s scatterbrained manipulated Left, rendered with the kind of cynical humor familiar to readers of the 1970s National Lampoon. We’re so far down the rabbit hole that Nazis have evolved a sense of humor. The laughter of Nazis is like a tornado sky, and the rule holds: when thunder roars, stay indoors.

These guys are street fighters, and they aren’t stupid. They’ll infiltrate these mobs and disrupt them. They’ll confront them directly in the streets of Cleveland. Neo-Nazi snipers on rooftops picking off Black Lives Matter marchers is not outside the realm of possibility. I suspect that the rank and file of the Cleveland Police Department would like nothing more than to watch a mob of BLM agitators get their shit stomped into the pavement by a pack of Nazi skinheads. It’s like a cop’s wet dream: the news footage alone would provide stroke fodder for cops throughout the country. BLM is so openly racist and fascist that seeing them on the receiving end of it at the hands of OG Nazis would trigger an overwhelming wave of schadenfreude in any civilized person of European descent.

White civilization is under attack throughout the West. Only Iceland, Russia, and now Hungary stand against the brown hordes invading Europe. Sweden, the most racially altruistic society in the world, has seen its magnificent social welfare system bankrupted by swarms of Muslim colonials. America’s a moral and cultural cesspool, a mongrel dog of a nation so obsessed with sucking its own cock on the kitchen floor that it fails to notice that the house is on fire.

I’ve been predicting the resurgence of National Socialism for a while now. You’ll never truly understand it if your only knowledge of it comes from Hollywood or some after-the-fact commentary by some victimized Jew. The only way to understand National Socialism is to go to the source: Mein Kampf.

It’s all there, in one distinctly unreadable book. Don’t try to read it cover-to-cover, the prose is as turgid as Dianetics or The Book Of Mormon, or anything by Jane Austen. It’s best addressed as a collection of essays.

Riot Season is upon us. If I’m right, the BLM crowd is going to hand this election to Trump. A close election can be easily fixed by Diebold, Sequoia Systems, and ESS. That’s a well-known fact. A landslide is a lot harder to rig. The growing epidemic of black-on-white violence and the violence being unleashed on Trump supporters just adds fuel to the fire, and the fire rises. It’ll be interesting to see how the polls read after the bloodbath in Cleveland.