Barbara Ehrenreich’s Natural Causes is a compelling thesis padded out to a 200 page book. 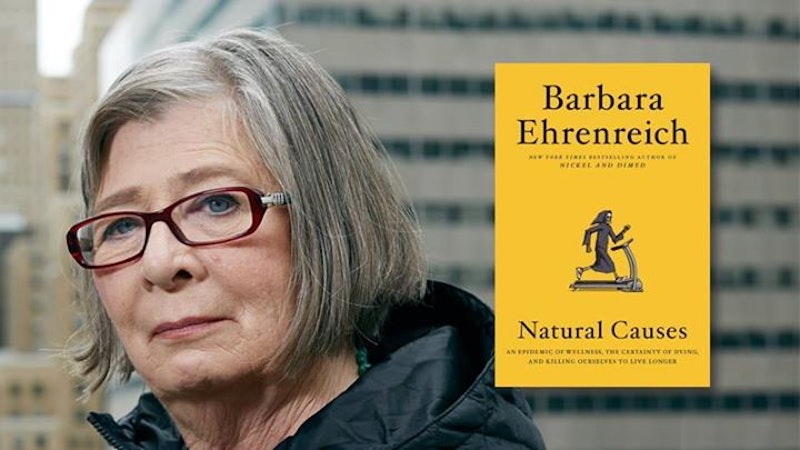 Barbara Ehrenreich, the leftist author and reporter perhaps best known for her 2001 book Nickel & Dimed: On (Not) Getting By in America, was the guest on a subscriber’s only episode of Chapo Trap House last week promoting her new book Natural Causes: An Epidemic of Wellness, The Certainty of Dying, and Killing Ourselves to Live Longer. I thought it was a fun interview: Ehrenreich’s a real crank, acerbic and sarcastic and suspicious of anyone pushing false positivity: “I’m happy to dismiss positive thinking all day.”

I was surprised to read how split fans were in the comments: many were excited to hear Ehrenreich, cited by many as one of the first leftist authors they encountered. But just as many were disappointed, even disgusted by Ehrenreich’s fatalism verging on nihilism and her casual dissuading of preventive screenings and tests like mammograms and colonoscopies. Ehrenreich writes in her book that she is now, at 76, “old enough to die”—in other words, no obituary of hers could contain the words “tragic,” “surprising,” or “untimely” (then again, you never know—I read at least a dozen headlines and tweets yesterday referring to Tom Wolfe’s death, at 88, as “tragic”).

Natural Causes reads like it was written in a week—it’s only 200 pages, and she essentially recited its summary in her Chapo interview. Even as a rote book-plugging appearance, it was refreshing to hear someone over the age of 60 scoff at the West’s “cult of ‘wellness,’” the ridiculousness of Silicon Valley billionaires who “want to cure death,” and fitness scolds that judge smokers and eaters of buttered bread as lacking in virtue, even sinful.

Smokers continue to be pariahs more than a decade after cigarettes were banned indoors in most of the country, yet alcohol continues to be advertised on television and glamorized while its obviously deleterious effects remain unchecked or even excused. A lot of my friends in their mid-20s and early-30s have either quit smoking, tried to multiple times, or chide themselves for bumming a cigarette here and there, as if it’s a moral failing instead of a simple indulgence like a hamburger or a can of Coke.

Yet much of the book is just Larry David level complaints about how miserable life is and how annoying other people are. Which is fine, but dressed up as social criticism, it’s mostly useless. I love social assassins and misanthropes but discouraging people from getting colonoscopies and mammograms is just stupid. Ehrenreich is also adamant that she doesn’t want to get screened for any diseases that will kill her “in five years.”

Some of what she writes about doctors and unnecessary rituals and ciphers—like white coats—is interesting, particularly the way that hospitals dehumanize their patients: “Medical education—beginning with the first corpse dissection—seems intent on removing any emotional connection between the patient and the physician.” Adrift in detached synecdoche, “we have the fabled doctor who is so lost in the ‘parts’ that he or she can no longer see the whole human, and refers to the patient as ‘the gall bladder in room 302.’”

Other than that, denials abound of the placebo effect and the intangible but real satiating ritual of being touched or asked a certain number of questions, whether or not they’re relevant or remain unexplored. Natural Causes is padded with pages and pages of basic modern medical knowledge: menstruation, how cancer cells function, how the body is not a harmonious whole but a series of warring parts, how the origin of so many types of cancer remains a mystery.

Ehrenreich’s main points—that the fitness craze and the scolding of those who don’t participate is absurd, and that anyone that wants to “cure death” needs to be locked in a dark room with nothing but paperbacks of No Exit and The Diving Bell and the Butterfly—are all valid, but they could’ve fit on a one-sheet. As a book, Natural Causes is disposable. It’d be cheaper to sign up for a $5 Chapo subscription, listen to her interview, and then peace on the subscription.