Wandering around via the Columbus Circle train station. 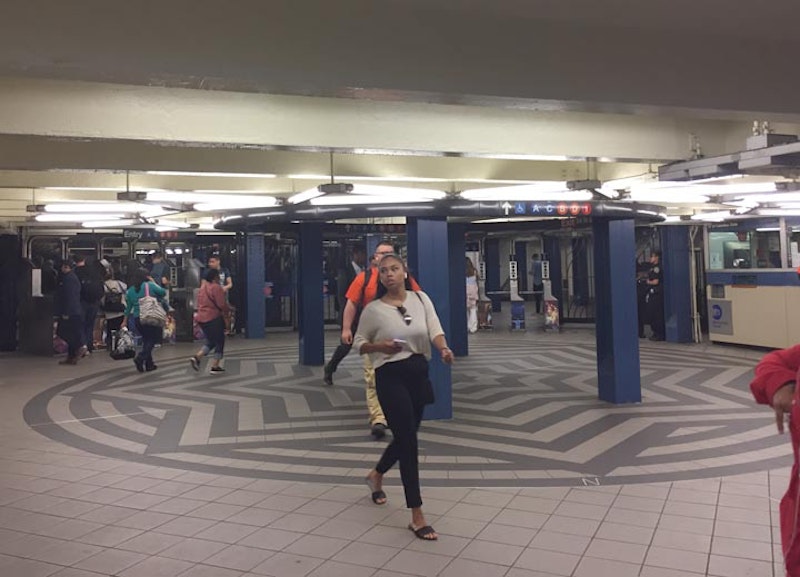 When you think of train terminals in New York City, the biggest ones like Penn Station or Grand Central Terminal come to mind. Each has its own set of ancillary shops and eateries; GCT does it more successfully, with its basement food hall (I’ve eaten Junior’s and Mendy’s sandwiches there after de-boarding a train or going on a job interview in the area.)

However, there was an untapped potential for such food and retail spaces at other transit hubs around town. I’m currently freelancing for a financial printer in the Columbus Circle area and for the first time in years, boarded a train from the IND 8th Ave. Columbus Circle station. Think of it this way: from here, a passenger can board trains that will take them to Inwood and the South St. Seaport, Manhattan; Norwood and Fordham, Bronx; Far Rockaway and Broad Channel, Queens; Bedford-Stuyvesant and East New York, Brooklyn. The Columbus Circle complex is an amalgam of subway lines that were opened in 1904 (IRT) and 1932 (IND, Independent).

Like other Independent subway lines (the IND) the stations themselves seemed overbuilt, with incredibly large underground corridors and conduits with exits spaced blocks apart. In this complex alone, between the two stations, the southern entrance/exit is on 57th St., the northern, 61st. My own experience here had been limited, and I knew the Columbus Circle underground corridor as a somewhat sleepy expanse, punctuated by a barber shop, with colorful artwork executed by NYC school kids in 1992 that illustrated “Christy”’s “discovery” of the North American continent. 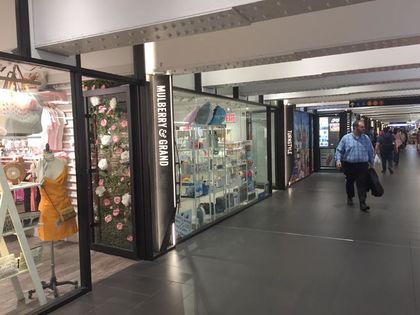 Imagine my surprise to find the corridor completely transformed into a public retail space/food hall, with distinct store and restaurant spaces arrayed along a public walkway, with benches and seats set up in the center for communal dining. What is called TurnStyle opened in April 2016, funded in the most part by Goldman Sachs, which hired the firm Architecture Outfit for the design.

I had a couple of chicken tacos for lunch, but there are other vendors such as Champion Pizza, Bolivian Llama Party as well as the seemingly redundant Stumptown Roasters and Starbucks. As much as I’m tempted, I stay out of places like the Doughnuttery and Dylan’s Candy Bar. 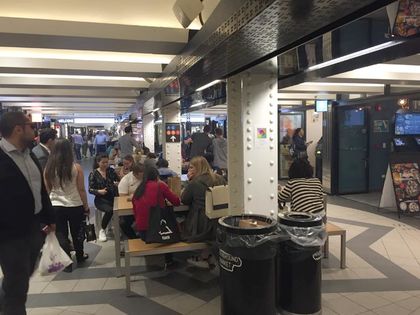 The whole mishmash is not unpleasant. I’m reminded of places like Philly’s Reading Terminal or Cambridge’s Harvard Coop, but on a smaller scale. Had TurnStyle been set up in previous decades, there would’ve been record and bookshops, but I won’t quibble. Music is pumped throughout the atrium, but it’s not obtrusive or turned up to 11. You can carry on a conversation. 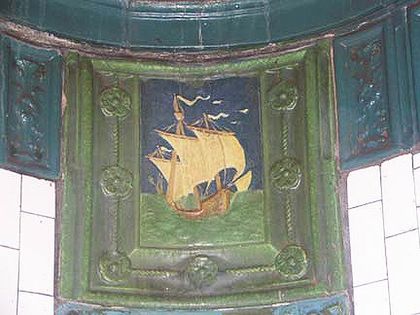 Built on a gentle curve, and full of all kinds of convex and concave walls, the IRT Columbus Circle station is one of the more interesting “Contract One” stations constructed from 1900-1904. It’s the only one that features Grueby Faience plaques placed on corners. The plaque depicts “the great navigator’s caravel” according to The New York Subway: Its Construction and Equipment, the book published by the IRT in 1904 when the subways opened. It’s likely not the Santa Maria, which was larger than a caravel and had a topsail. The plaques are surrounded by rosettes and, as we have seen at Astor Pl. and 50th St., the amphora motif. There are also simple versions of wall tapestries; more elaborate ones, as we will see, can be found a couple of stops later.

Much of Columbus Circle was compromised when the IND subway was built intersecting it along 8th Ave. in the early 1930s. Much of the station was lost so a connection to the newer subway could be made, but ample room was also left because there was a plan to make Columbus Circle an express station and convert 72nd St. to local. The platforms flange out very wide in spots as space was left for this now-scrapped objective. 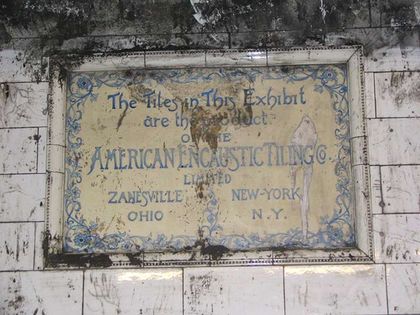 When the IRT Columbus Circle station was given its most recent renovation, in the mid- to late-2000s, this relic was discovered, a curious plaque with Art Nouveau, Aubrey Beardsley-esque lettering and ornamentation.

The use of the word “exhibit” seems to imply that a number of station treatments were originally considered before the Grueby-Faience plaques depicting Columbus’ sailing vessel were selected.

American Encaustic Tiling Company was founded in Zanesville, Ohio, in 1875. The company planned to make a variety of tiles to compete with the English tiles that were selling in the United States for use in fireplaces and other architectural designs. The first glazed tiles were made in 1880, embossed tiles in 1881, faience tiles in the 1920s. The firm closed in 1935 and reopened in 1937 as the Shawnee Pottery.

Hidden under walls for decades, the American Encaustic tile was exposed by the construction and appeared like this when I saw it in 2007. It has since been given a protective frame and hangs on the completed station wall now. 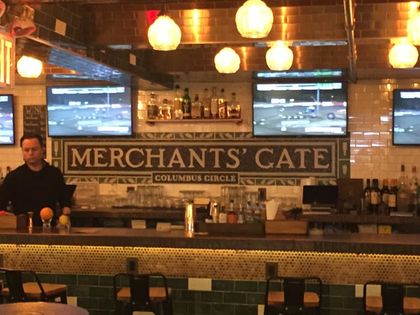 At the south end of the TurnStyle corridor is the bar Merchant’s Gate. Its mosaic sign is actually a very good reproduction of the mosaic plaque signs that both the IRT and BMT subways were producing for subway stations constructed in the 1910s; that “G” is excellently rendered. Ironically neither subway line at the Columbus Square complex used this style.

Why is the bar called Merchant’s Gate? The answer is simple. Central Park masterminds Frederick Olmsted and Calvert Vaux whimsically named several main park exterior openings as “gates” when the park was being built in the 1860s. Running clockwise around the park from Columbus Circle they are: