The Late Stages Of Mt. Everest

The legendary mountain's looking more like a dangerous Disneyland every day. 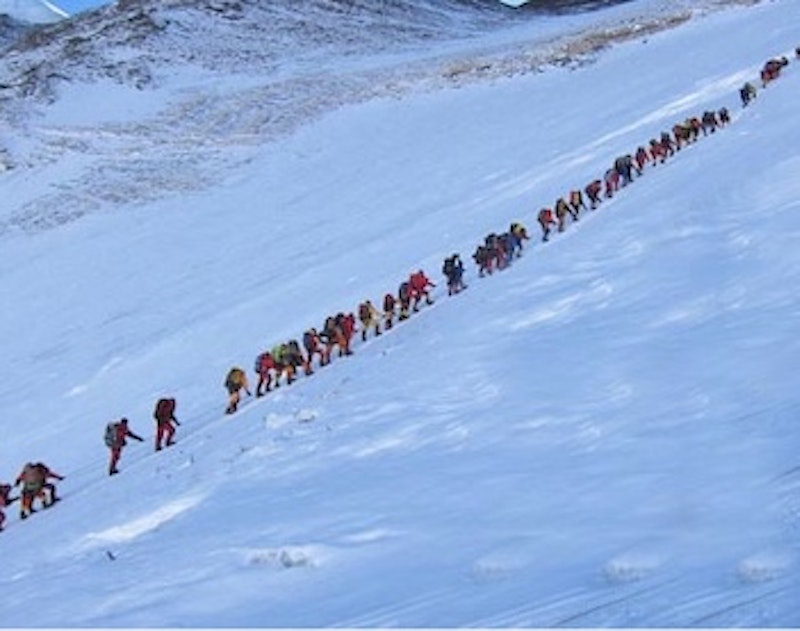 An American who was on his way down after summiting Mt. Everest in late-May was the 11th fatality on the storied peak this year. No cause of death has yet been announced, but I suspect he couldn't make his descent fast enough because of the long line of people waiting up to two hours for their shot at an ascent. Your oxygen-starved body’s in the “death zone” once you've made it to the top and are savoring your achievement while taking in the majesty of the Himalayas. Your situation resembles Houdini’s as soon as he was submerged while doing his famous underwater chain escape. The fact that you had to wait so long in that thin air just below the peak makes your situation even more urgent.

When the top of Mt. Everest resembles Walmart on a holiday weekend, you know that nature's forces have gone out of whack on the mountain the native Sherpas consider sacred. The entire experience of climbing to the top of the world's highest mountain is now heavily discounted.

Mt. Everest has had a grip on the public imagination since British mountaineer, Edmund Hillary, and Nepalese Sherpa, Tenzing Norgay, accomplished the feat for the first time in 1953 after many had failed. Hillary received a knighthood, while Norgay, who did the bulk of the physical labor while doing everything else that Hillary did, had to settle for a “George medal,” marking a disparity that continues to this day. Sherpas are Everest's beasts of burden. One of the loads they carry is the swollen egos of the wealthy climbers they cater to.

The years have taken their toll. Litter’s everywhere and dead bodies are a common sight because of the expense of transporting them off the mountain. Commercialization's stripped away much of the mountain’s allure. You have to be blinded by something to think you’ve chosen the most exalted way to test your physical and mental limits in a natural setting when it involves waiting in line with hundreds of other status seekers at an altitude of 29,000 feet for your chance to get your ticket punched. How did the ascent of Everest deteriorate from a rare gem that only a handful elite adventurers could ever hope to own to a mass-marketed commodity that's there for anyone with plenty of cash on hand?

Jon Krakauer’s gripping book, Into Thin Air, which chronicled an ill-fated 1996 guided group ascent on Everest is the primary text foreshadowing the beginning of the end. Eight climbers, six of them amateurs, died on that expedition after an unexpected storm engulfed them at the mountain’s peak. Krakauer has admitted that his presence on the climb pushed New Zealander guide, Rob Hall, to take unnecessary risks because of the marketing potential the author's eventual story for Outside magazine represented. Hall stayed on the peak too long helping one of his clients and ended up freezing to death. His fellow guide, Scott Fischer, also perished in the tragedy.

Everest, as some say about capitalism, has reached its late stage. Scaling it, which can cost  $75,000, has become a coveted status symbol for those not satisfied by already possessing all the standard totems of mega success. “Everest is not real climbing,” said Krakauer. “It's rich people climbing. It's a trophy on the wall, and they're done."

The reason it remains that prize, despite the fact that Everest barely cracks the Top 10 of most difficult mountains to climb, comes down to status. When you return to sea level, how do you communicate your status after climbing Mt. Kangchenjunga, another Himalayan mountain considered more dangerous than Everest? No one's heard of it.

It's all about having a recognizable brand name, but the brand’s getting tarnished by all the recent deaths and photos of the crowded mountaintop. Nepal could intervene and issue fewer climbing permits, but they're a big generator of hard currency for a nation that has little else to sell to the world. Most of the fatalities involve people descending from the peak. It's not the mountain itself that’s killing these adventurers, it's their ego. They wait in that line knowing the extra danger it presents. As long as people continue to be willing to pay with their lives for bragging rights, the situation’s unlikely to improve.