He was a rock & roll god of the blues and beyond. 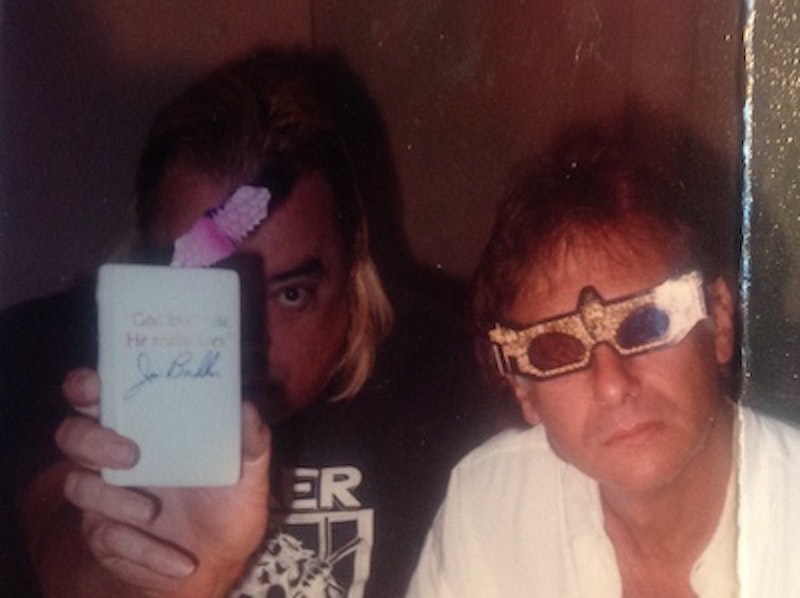 If you’re in the wrong place at the wrong time it seems only right to make the best of a bad situation. Like the old saw if someone pisses on you, make Lemonade. This could be the mystical equation that spawned Root Boy Slim. A multifaceted man of many contradictions. Root Boy Slim was born Foster Mackenzie III in North Carolina in 1944 at the peak of WWII. Coming of age when the Korean War bled into the Cold War with Russia, Vietnam and the turbulent 60s. He grew up near the cradle of democracy. Hanging out around Silver Spring, Bethesda and Chevy Chase. Graduating from Yale with George W. Bush as an unwelcomed classmate.

A bad acid trip landed him in the looney bin of St. Elizabeth's hospital where he was diagnosed as schizoid and remained heavily medicated. The reason for this straightjacket reality intermission was an attempt to climb the White House fence. He was apprehended by the Secret Service running across the rose garden lawn. When questioned he replied he was "searching for the center of the universe." That's the last place I would look, but hey, it was the late 60s. Weird events and crazy stuff was happening all the time. It was reported he may have pissed on the Pentagon, an act of civil disobedience, later becoming subject matter fodder for one of his tunes. Many Root Boy Slim songs are autobiographical.

I really cannot remember the first time I witnessed Root Boy Slim & the Sex Change Band w/ the Rootettes. A far cry from a spinoff group the likes of The Ronettes or Rayettes, this Memphis swamp boogie blues band was an Ala Carte spoof parody of Little Feat or Allman Brothers, a perverted personification of funkified farce. Root Boy always had top notch musicians backing his messed up persona. Called the Lenny Bruce of the Blues. Or the Prince of Puke, a moniker he shared by Baltimore’s native son, John Waters. Root Boy Slim hails from the vocal school of such golden throats as Captain Beefheart and Tom Waits. Just another white dude trying to sound like Howlin' Wolf. Like Mick and Keith's love affair with Muddy Waters. Little Richard's claim of Rock monarchy or Jerry Lee Lewis playing the devils music. Root Boy Slim was one of a kind. Such notable luminary performers as Rev. Billy C. Wertz or Mojo Nixon might belly up to the bar with Weird Al Yankovic and Roger Miller to see the likes of a Root Boy Slim. Invite James Brown and Ray Charles, Zappa and Dr. Demento to the mix and turn it up.

My first Root Boy Slim sighting was either the Psyche Delly in Bethesda, Md. or The Marble Bar in Baltimore. The reason I can't recall which is which was because it was the 70s. I saw Root Boy at both venues on two closely consecutive nights. Unlike the 60s where nobody remembers anything the 70s were a series of blackouts and hallucinations that blended together and burned scars into one long bumpy night, straight to the soul of rock & roll. To say I was a rabid fan is an under-statement. I was a Root Boy Slim fanatic. His songs were the mindless mantra of my wasted years. In retrospect they weren't as fucked up as you might imagine. I somehow survived all the chaos and confusion of punk and funk, disco, rap, Christian rock, new country music and everything else that stunk. The thrills, chills and strange pills of a generation out of control. How we made it through the baptism by fire, I have no clue. Too many didn't make it including Root Boy Slim.

He died in his sleep at 48 in 1993. His act caught up with him. Or maybe he was between the acts with a shtick that was wearing thin as the years loomed larger than a beer bellied drunk dancing the polka. Or his patented dance, "The Gator": a dance that involved getting down on the barroom floor and crawling around while wearing ZOOM or ROOT sunglasses. It was dumb and senseless drunken high as fuck crazy people fun. To see Root Boy Slim live on a good night was a spiritual revelation. An epiphany of epic proportions. Sheer poetic tragicomedy, sacrilegious ceremony plus a burlesque vaudevillian cartoon show. Root Boy Slim defied conventional rock blues spectacles. He was a show unto himself. If it was all just an act he fooled me and was a master at deception. Shoving the entire country of South America up his nose, his head was the Fort Knox of blow.

As an eyewitness to Root Boy's Olympian stamina, consuming illicit drugs and alcohol only fueled his onstage antics. I watched him once at a gig as he waited to go on backstage. A young suburbia fan offered up a taste of his personal stash, a folded paper bindle of coke. Root exclaimed, "Lemme see dat!", shoving the entire pile of powder up his snout. Licking the paper clean, he handed back the empty crumpled scrap and thanked them for their sacrifice, like a caricature of Elvis Presley: “Thank You, Thank You very much.” This was commonplace in those heady bar gig days of yore. Not at all unusual from the stage of the 8 x10 club in South Baltimore to the D.C. National Mall "Smoke In " festival. He was the ultimate court jester of the counterculture. The way he delivered his punchline lyrics with a deadpan stare. Like his hit song, boogie till ya puke, a blues man of tongue in cheek. Every line delivered a one, two knockout head butt of laughter.

So many hilarious songs on albums like Dog Secrets: songs about Inflatable Dolls, Mrs. Paul's fish sticks and cowboys out in the sun too long. Dog Secrets featured a cover photo of the Root whispering in a dogs ear. A flip on the Victor music dog listening to an antique Victrola. Or Don't Let This Happen To You with a pic of an introspective aging Root Boy Slim holding a human skull to his gone gray bearded cheek. It's best to start from the beginning with 1978's Root Boy Slim & The Sex Change Band w/ The Rootettes. Work your way through the discography to Root 6. His final masterpiece. I listened to that so much I had the jukebox guy at the Right Bank bar in Brooklyn install it so we could play it all the time.

He was a rock & roll god of the blues and beyond. A cartoon clown of himself as Root Boy Slim. In the picture above is Root Boy Slim with David Franks, his sometime purported song writing partner and old friend. Outrageous behavior, outlandish costumes, and hysterical song lyrics were his forte. He was as unpredictable as the weather. Some nights he appeared on stage barefoot in cutoff shorts and a dirty t-shirt with the name Numero Uno emblazoned across the front. Mumbling like Bob Dylan on an off night. It was always a tough crowd. Either way Root Boy Slim is worth a listen. Once you start to boogie, try not to puke.