A family reunion yields everything but a hit record. 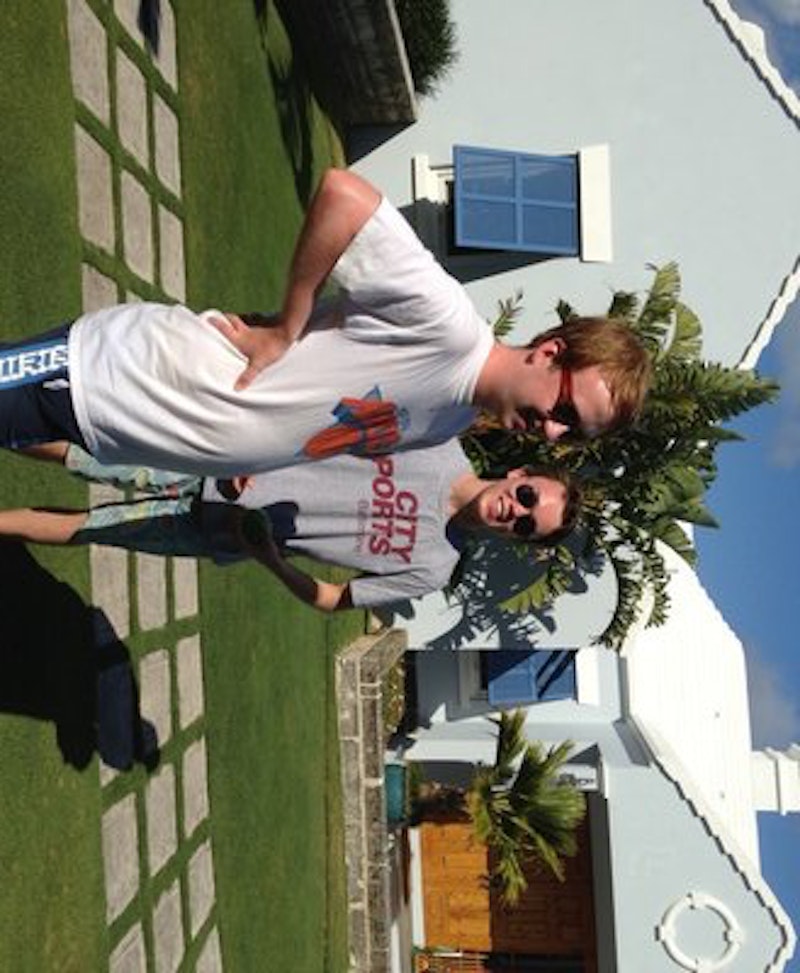 Early last Saturday afternoon I took a jaunt into St. George’s, Bermuda’s onetime capital (before losing that distinction to Hamilton in 1815) and found myself in a scrum of tourists near the harbor. The attraction was a 17th century reenactment of an outside trial, with men and women dressed in the garb of the time, and one costumed lady walked the plank for public drunkenness and foul language, bellowing in the dialect of that time. She was “guilty,” of course, but eight Japanese visitors didn’t quite understand what was happening, and just as the town shrew was about to drop in the drink, they helped her out by interfering with the fellows carrying out the charade. It was a hilarious scene: while dozens of people were recording iPhone videos of the proceedings, the Historical Society actors were trying to scoot the interlopers off to the side, breaking into contemporary English to express their profound ire. I’d be cheesed off, too, in their shoes: probably volunteering or working for peanuts, and sleep-walking through the skit for the 1000th time, who needed an intrusion that would keep them from a well-earned pint?

My wife, sons and I were in Bermuda for a long weekend, and though we often visit my brother and sister-in-law’s splendid residence in Tucker’s Town, this occasion was different: an all-the-trimmings Smith extended family reunion for 40 people or so, including cousins, siblings, nephews and nieces, in-laws, grandparents (of which I’m not one, at least not to my knowledge) and uncles and aunts. In fact, on that Saturday, the majority was off on a four-hour boating/snorkeling/fish-sighting excursion, and as I’m allergic to anything that has a hint of Jacques Cousteau, I was quite happy to go the urban route and, typically, got lost even in this very small town. That’s a drawback of lacking a natural sense of direction, although I don’t really care, figuring, in this case, it just meant I was able to see a bit more of St. George’s; the alleyways, two hobos sifting through trash cans, one busker whose hat was empty till I threw in a fiver, and ladies doing the wash in their minuscule backyards.

The kick-off for the weekend was on the evening of June 27, a barbeque—roasted pig, local fish, kielbasa, chicken, figs and blue cheese wrapped in prosciutto and scads of vegetables and salads—at my brother Gary’s house, and as we arrived from the Mid Ocean Club down the street, it was fairly overwhelming. (Gary and his wife Teresa were roundly toasted for painstakingly planning and hosting the gala, which took months of detailed work.) Historically, the Smiths are a tight-knit group, and this goes back several generations, before I was born, but given the far-flung locations of relatives it’s not often—save wakes and weddings—that we’re all in one spot. So, I spied a tall, dark-haired teenager, figuring he was the date of my grand-niece, but no, it was grand-nephew Jed in the flesh, just a foot taller than when I’d last spoken to him over a year ago. Surprises like this cause the sea legs to flounder, and upset my plan to carefully work the crowd, making sure I spoke to everyone I could. Good Lord, I’m getting dotty, sort of like my beloved Uncle Joe as he waded into his septuagenarian years, still handsome as ever with slicked-back silver hair (in general, the Irish don’t age especially well, but Joe drew the jackpot DNA card on that count), but he developed a few peculiar tics as he aged, such as making a “dry run” the day before to the locale of a family gathering.

As I sat at a table with my sister-in-law Mary (whom I’ve known since the early 1960s), Barbara, Bill, rock-climber Xela and my wife Melissa, scarfing down too much spit-fire Porky Pig, I surveyed the scene where relatives of all ages were in animated conversations, whether it was our boys Nicky and Booker gabbing with their cousins Quinn, Kira, Zoe, Jenny, Bronwen or Rhys, nephew Caleb holding forth on the Snowden affair, or the pre-teens Jaden, Rebecca, Olivia, Maura, Derek, Lillian and Savanah running around, climbing and jumping, creating innocent and mirthful chaos. As is common, I suppose, for a 58-year-old, I saw these bright energetic kids and unconsciously flipped back the decades and saw, in black & white, Christmas, Thanksgiving or Independence Day parties at the homes of Uncles Joe or Pete, when my four brothers and I were not yet fully cynical and sarcastic (at least in my case). Joe and Aunt Winnie had the prime real estate back then on Long Island, in Glen Head, and while my long-deceased parents would carry on adult conversation, highballs in hand, the rest of us scampered about, drinking Cokes, plonking on the player piano and asking, no begging, Winnie if we could scrounge around their treasure-filled walk-up attic.

Reveries come and go, and mostly I was squarely in the present, bantering with Barbara and her husband Bill about the Italian and French resistance during The War—we’re a long way from 1945, and still people refer to World War II as “The War”—Top Ten Film lists and then, when my sabermetrician son Booker stopped by, fantasy baseball. Nephew Andy, who met Zoe at Boston College in the 90s—their wedding in Nantucket on Sept. 8, 2001 was an event to remember, and not just for the tumult that occurred just days later—and is about the most rabid Boston sports fan I know, engaged in spirited Red Sox talk, even though he was still metaphorically sitting shiva over the Bruins’ Stanley Cup loss.

The next night, during dinner at the Mid Ocean Club, I was slightly jarred when my cousin Ronnie’s son Richie, 17, asked me in which decade I graduated high school. No offense taken at the general nature of the question, Little Richard—when you’re a teenager everyone over 30 is ready for the nursing home and a diet of rice pudding and more rice pudding—but when I answered 1973, his jaw dropped and he said, “Awesome! So you must’ve seen the Beatles at Shea Stadium.” I didn’t, but naturally watched the Fab Four’s initial Ed Sullivan appearance with my brothers in early ’64, and to Richie’s eyes, that was the equivalent of shaking hands with Rimbaud, Andrew Jackson or Keats, so long in the past. I knew it’d blow him away by mentioning my prime seats in ’72 at Madison Square Garden for the Stones’ Exile on Main Street tour, and it did. That I saw Bruce Springsteen at a small venue in ’75, pre-Born to Run, made no impression. He and his brother Brandon, 15, are top athletes at their Long Island high school, and form the keystone combo for their team. Which is why, Richie said, he admires Boston’s Dustin Pedroia, even though as a Yanks fan he hates the Red Sox.

Later on, it was my turn for a Holy Cow! moment when I was speaking with Michael, my cousin Bern’s husband, currently a radio website entrepreneur (www.talkers.com) but long ago a fixture at WNEW-FM, back when the likes of Rosko, Alison Steele (The Nightbird), WABC-AM-defector Scott Muni and Pete Fornatale ushered in progressive radio in New York City. Which meant DJs playing whole sides of albums, reciting poetry, or spinning arcane song after psychedelic song, and no commercials. My son Nicky was wowed when Michael mentioned he’d met Harry Nilsson, among other stars of the era, and was present at the studio when Fleetwood Mac recorded Tusk. Those particular anecdotes flew by me, but Rosko! That’s a miracle.

Truth be told, I was sorely disappointed that I fared so poorly in a long bocce tournament on Friday afternoon. (My brothers were out of the money as well, which was a minor consolation.) Bermuda’s sun at this time of year is so overpowering between the hours of one and four that you can slather the highest-intensity sunblock all over your exposed skin and still come away with a nasty sunburn. It was still punishing at 4:30, but no excuses, 25-year-old Quinn, playing the manicured court just so, won all bragging rights. Next time I meet up with him in NYC, that’ll be a quick dig in my ribs, since we rarely forget such competitive matches, whether it’s bocce, croquet, card games or ping-pong.

But the sting didn’t last long, for as Melissa and I looked up at the stars Saturday evening—she pointed out the Big Dipper, which, as a former Boy Scout, I’m embarrassed to say I couldn’t identify—recounting so many marvelous conversations during the weekend, I was completely relaxed, and can swear that I saw a jovial red-headed spirit in the sky.