Why Stephen Fry Talks So Much, and Other Questions 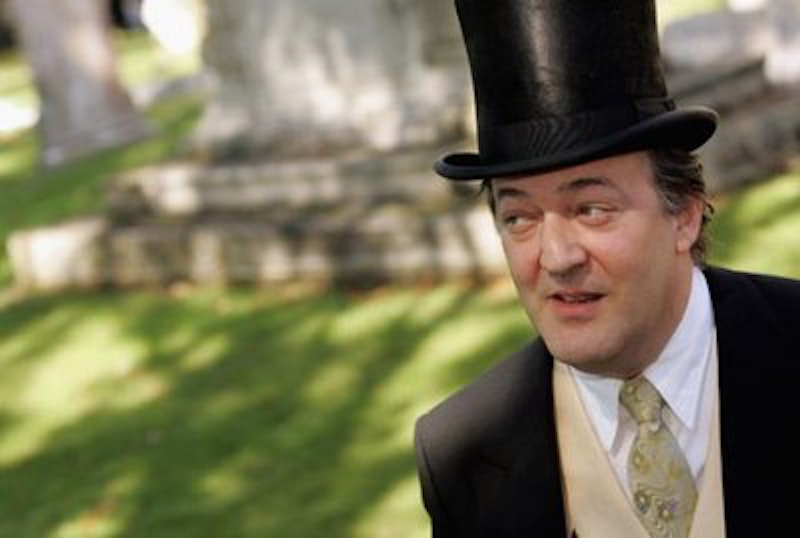 Dear Sirs: Mr. Stephen Fry takes four and a half minutes to tell people they shouldn't fuss about disinterested versus indifferent, fewer versus less, actioning versus doing, or any other petty rule of usage. Oscar Wilde waved aside all such questions, he says, and nobody knew better than Oscar Wilde.

People have made tiresome speeches about “which” versus “that,” or why one should say “nauseated” instead of “nauseous.” Now Mr. Fry has made a plummy, adroit speech putting these people in their place. His words are meant as an object lesson. The words are clever; therefore, the message they spell out is something that clever people are allowed to think. That's why four and a half minutes were needed: to demonstrate the cleverness on hand by means of Mr. Fry's well-tailored prose.

He doesn't make quite as much sense as he would like. Yes, it's foolish to worry about “to boldly go,” but “impartial” really has lost a useful synonym now that “disinterested” doubles for “uninterested.” Mr. Fry takes the sweeping view that any objection to blurred usage is mere blindness to the needs and vitality of a changing language. But some changes are good and others are bad, and people who pay attention might as well notice. That's an awkward theme for a speech, so instead we have Mr. Fry's all-or-nothing approach.

Speech giving really is the root of the problem. People want to feel smarter than those around them, so they erect elaborate preferences regarding word usage or Mac vs. PC or some other small but significant topic known to all. Then they wait to give a speech. Stephen Fry, lord of the speechmakers, has arrived to show his little brethren where their heads should be at regarding the language debate. He's more right than wrong, but his methods—I cannot abide his methods. Signed, One Who Dwells Much in Words.

Dear Sirs: A coworker has chosen for herself the name Lulu. I refuse to call her by it. Remember that I have my pride too. If my coworker named herself Dipshit, she couldn't by that act trap me into saying “dipshit” several times a day. I would simply refuse. The same, then, for “Lulu.” It may be that her parents gave her the name, I don't care. Signed, A Setter of Limits.

Dear Sirs: Let us remember that Dorothy Rabinowitz, a member of the Wall Street Journal editorial board, is old and weighs less than a delicatessen sandwich. When a bicyclist rides on a city sidewalk that also holds Miss Rabinowitz, the world of a very small and frail woman is being invaded.

No wonder the thought of New York City's new Citi Bike program prompts in this woman such delightful outbursts as her denunciations of the supposedly all-powerful “bike lobby.” Miss Rabinowitz is a tiny, fierce creature who likes to see far, and those who interfere can expect her teeth in their ankles. You may regard this correspondent as one of the same breed. Signed, A Terrier of Horizons.

Dear Sirs: “Saturday Night… mid 1970's Capitol Theater in Passaic N.J. Midnite movies... Old newsreels... Three Stooges... and this. Life was good.” These were the words of a YouTube comment posted beneath an animation short of Lenny Bruce's “Thank You, Masked Man.” There's something very comfortable about what it says. A crowd of teenagers with nothing to do on a Saturday night, and they're gathered in a suburban movie theater to watch odds and ends of hip media until 2:30 a.m. Most of the kids are stoned, which they think makes a difference, but the real force at work is the pleasure of being passive and adventurous at the same time. Somebody else picked the program, and the kids get to plunge into it. They do this together, as a crowd, and can listen to each other laugh at the good bits.

I don't think movie theaters do stoner night shows anymore, at least not as a regular thing and extending for hours. People who want the experience have to settle for life at home with YouTube and DVDs, and maybe a few friends gathered in the living room. All right, picking out your own program is also good. But let's be frank: how many people can gather a crowd of friends to watch movies every weekend? Saturday night at the Capitol in Passaic in 1977 was a collective kind of thing, and damn, now it's gone. Signed, See How the Years Pass.

Dear Sirs: Was it not Henry James who supplied for complaining authors the most gorgeously indirect of formulas? On hearing out a theater manager's offer for the play James wanted to write, the Master replied, “I should be obliged to you if you can put the case to me more dazzlingly another way.” The words are his, as recorded by biographers. Signed, A Student.