Bert and Ernie, Doing It 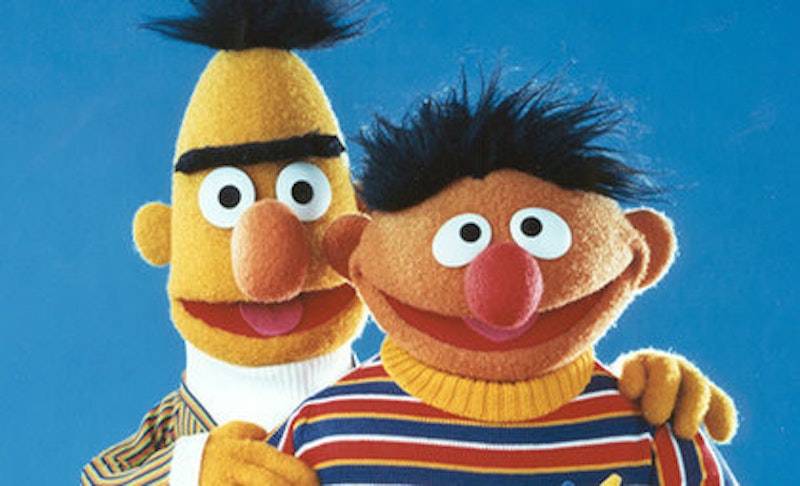 Dear Sirs: A gay blogger suffered a stroke because of the recent New Yorker cover featuring Bert and Ernie. Before hitting the floor he produced this sentence: “Absolutely: it’s a continuation of the idea that sexuality affects personality as much as it speaks of our obsession with outing the private lives of public individuals—in this case fictional characters that most of us grew up with.”

If you hum it, you can get the drift: enough with sticking people's sexuality on them, acting like it's a game of tag and they've just been caught. Let Bert and Ernie be. Not the guys on the New Yorker cover, the originals back in their garbage cans.  Leave them out of the Great Snigger because everything should be left out of the Great Snigger.

Well, one can respect the view. It's a new day, I guess. Now people can go about being people and minding their own business. But if you're older, The New Yorker's Bert and Ernie cover says something. We've had 40 years of people coming out, and the result has been the landmark year of 2013, when suddenly heteros as a group decided to get a lot less freaked out by the gays. For people who lived through the decades of preparatory spadework, the cover provides one last go-around with a familiar experience: that of learning that somebody you've known for a long time isn't straight after all. The work, by Jack Hunter, is beautifully composed and colored. Yours truly, They're Here, They're Queer, We Got Used to It.

Dear Sirs: DeForest Kelley, come on. Gay, the guy was gay. That sweater? Come on. Never said a cross word to anybody, smiled to all, married to a lady God-knows-what age, years older. I mean, okay, closet. All right? Closet! Listen, those were the times. That's how things were. Maybe a person spent his whole life making sure he didn't get crosswise of anybody. Because if he did, uh oh, secret comes out. I mean, that's the horror of it, of what the closet did to everybody. But gay? Yeah, I think he was. Yours, A Student of Behavior

Dear Sirs: When you sign up for Netflix, they don't let you check what they have until after you do the sign-up. No browsing the inventory until then. Also, the trial month is free only if you say no. I've posted a big handwritten note on the wall: Netflix, July 27, keep/lose? The “July 27” is in red, nice and big. I'm not going to forget. Yours, The Prisoner of Zenda

Dear Sirs: BuzzFeed likes to do listicles in which a downer, glowering character is taken out of a movie or TV show and given a showcase presentation. Photo after photo of the downer, matched with captions to underline the character's many ways of being a thorn-in-the-side disgrace to regular society. Here's a listicle about Wednesday Addams, from The Addams Family. Two others I've seen were about Stanley on The Office and April from Parks and Recreation.

In each of these cases the idea is that the character uses his or her bad attitude to knock you back. The characters don't have anything special in the way of muscle or brains or charisma. They're just pissy to an extreme degree, and for that the rest of us must step back and give them a little extra space. This decision adds a sliver to their tiny dominion on this earth, which causes BuzzFeed to celebrate. Signed, It's a Grubby Business.

Dear Sirs: Yes, a new crop of young people has arisen and been deplored (“Generation Selfie? Forget It!” June 22). Yes, the same has happened many times before. No, this does not mean that anyone who comments on youth must be dismissed, not even if the comments are critical. Signed, The Old Man and the Lawn.