Forgiveness Is a Beautifully Selfish Act 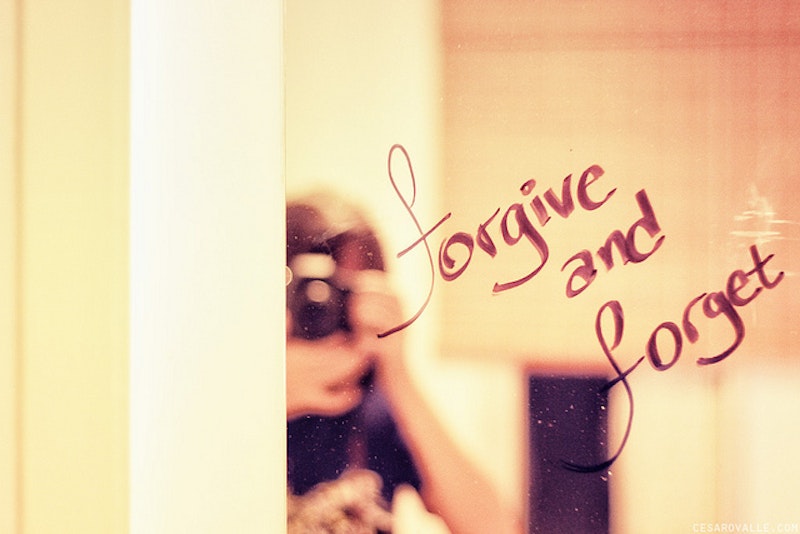 Recently I took a trip home and went out to a gay bar with my sister and a few friends. As I ordered my usual whiskey and coke, an old friend approached me. The last time the friend and I had spoken, we exchanged heated words over an article I’d written about being gay, and what it meant to me. The article sparked controversy, and my friend thought I’d overstepped my bounds. The conversation at the time ended with him curtly telling me, “Have a nice life.”

As the bartender handed me the drink, I thought about turning away, or rushing back to my friends, or scolding this person who I had once felt close to. Instead, we hugged. I’m not sure what possessed me to do it, or why I suddenly felt like all the things said between us in the past no longer mattered—but I did.

We forgive people when they wrong us because we’re told to “take the high road,” but the high road can be crappy. When someone hurts us or makes us feel less than worthy, it’s easy to feel angry. We want our opinions to matter. We want to let them know that their words cling to us like the smell of cigarettes. We want to tell everyone just how shitty he or she is. We want vengeance to be swift and just and the world to be set right. The high road never offers this; instead, it’s solidarity and emotional silence.

Other times we forgive people because we love them too much to stay angry. We realize that if we harbor so much hatred it fills up the space we have in that chasm for the desire to hug and hold them close. Sometimes we have to make a choice between laying down our weapons and offering up a white flag made up of Ben & Jerry’s ice cream or waging a war that may never be won.

Most of the time, however, the act of forgiveness is a beautifully selfish act.

And sometimes we forgive people to remind ourselves we’re capable of compassion. That we’re able to push past all the bullshit that has melted us down and remolded us into the person we are today. It makes us feel good to know that we didn’t rally the troops to strike them down, that we let them walk away. Sometimes we forgive people because we’re too exhausted to fight anymore, and our heart may burst if it hurts any more.

I forgive those who have wronged me because I forget to be mad. I forget about the cutting words and cheap jabs because the times where things were easy are so much more quickly recalled. I like to think my friend I saw in that bar forgave me for the same reason.