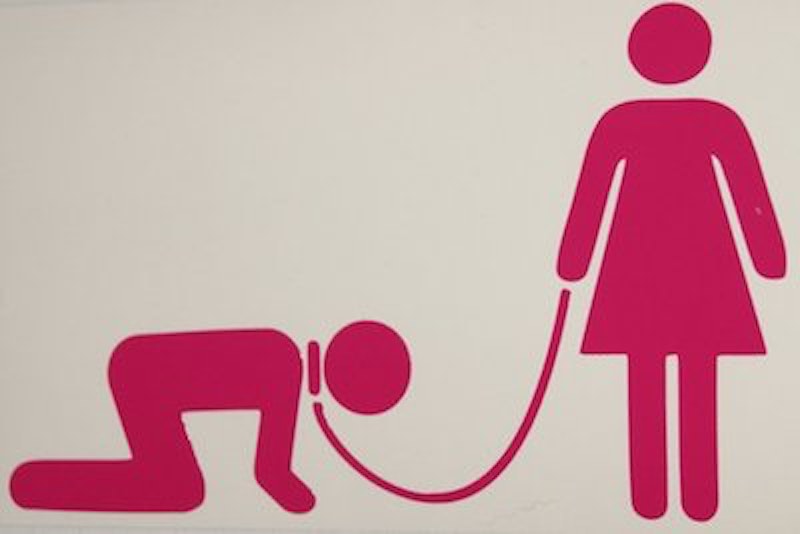 The liberation movement begun by transgendered persons in the teen years of this century is now reaching total fulfillment with the recent Supreme Court decision regarding the Mistress Pandora vs. Chik-fil-A case. Mistress Pandora has emerged victorious, freeing countless Americans from the onerous “No Shirt, No Shoes, No Service” laws of the primitive 20th century.

In a desperate last minute maneuver, the Chik-fil-A legal team tried to argue they were a family-oriented Christian values based food chain, and that the concept of “voluntary slavery,” or Consensual Non-Consent (CNC), as it’s now known, was incompatible with their corporate values. By defining her slave as a “service animal,” Mistress Pandora pulled off an amazing end run against the revolting oppression of CNC persons.

“I am pleased with the wise decision of the Court,” she said afterwards, on the steps of the Supreme Court with her naked male slave collared and leashed kneeling before her. “This relationship is entirely voluntary and consensual. It’s as much about his rights as it is about mine.” She refused to allow her slave, who apparently has relinquished his name along with his clothing, to be questioned. “He has surrendered all rights to me and will not respond to questions.”

As you may recall, she walked him naked, collared, and leashed into a Chik-fil-A in Gainesville, Florida, on July 4, 2018. She was politely asked to leave by the staff, whereupon she promptly sued for discrimination. The suit went all the way to the Supreme Court, where it was determined that voluntary slavery was a human right that must be upheld and allowed free public expression. She further expounded, “The ongoing suppression of Female Led Relationships and Female Domination must stop. The public expression of male submission must be allowed if we are ever to dismantle the cis-gendered heteronormative white Christian patriarchy. We must reclaim ritual male slavery as the ancient feminist rite of sacrifice practiced in the ancient Goddess-worshipping cults of Crete and the Crimea.

The issue of nudity was positioned as a hygiene issue by the Chik-fil-A legal team. It was quickly dismissed, as her slave was not permitted to sit on furniture of any kind, and was presented as comparable to a blind person’s guide dog. “Are guide dogs and other service animals required to wear diapers?” she queried. “My slave is fully toilet-trained. He is sort of human. He can speak, when I let him. In fact, he’s quite articulate. He has a right to be a naked slave. It’s a human rights issue.”

The CNC community rallied nationwide for the right to express themselves in public, with thousands parading their slaves in public. The 2020 march on Washington had a tremendous impact, especially with all the tight male bodies in Speedos and collars, and the #slavelivesmatter hashtag went viral on Twitter. When Ann Coulter and Florence Welch came out and admitted to keeping male slaves, the dam broke, and numerous women from Dianne Feinstein to Cher came out and admitted to keeping male slaves chained up in their basements.

It was the religious aspect that did it. Although not practiced for millennia, the Goddess-worshipping cults of the ancient world were known to practice the ritual enslavement, torture, and sacrifice of men. It’s above all an affirmation of religious practices between consenting adults. America’s finally grown up and faced itself in the mirror. Torture is what we do. It’s tradition.