And a dilapidated building. 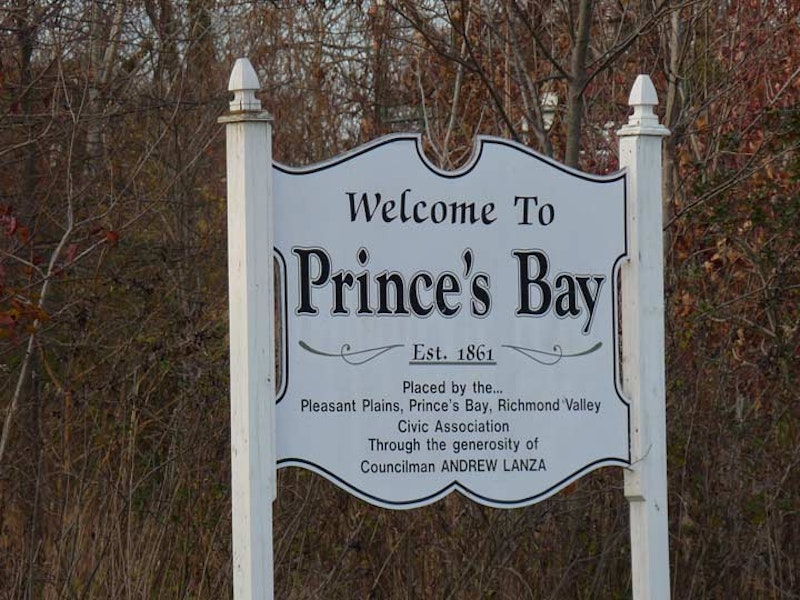 Confusion has existed for decades about the neighborhood’s correct spelling, though most signs are correct now, including the “official” sign on Amboy Rd. and Seguine Ave. shown here. After the Revolutionary War ended, New York City virtually divested itself of royal place names, though Prince St. in Manhattan and Kings Highway in Brooklyn are still there. According to tradition, Prince’s Bay is so-called because before the Revolution, a British prince, the Duke of Nassau, who later became William III (he co-reigned with his wife and first cousin Mary II as William and Mary), once anchored a vessel in the actual bay at the foot of today’s Seguine Ave. The name of the area is properly spelled with an apostrophe, though variants due to mispronunciation like “Princess Bay” have appeared in print. The French Huguenot Seguine family were early settlers in the area and resided here for a couple of centuries.

The pronunciation baffles me, as well, since I look at the word and sound it as “sa-GEENE,” but I’m told that area residents pronounce it “sa-GUY-n” with a long “y.” Doesn’t seem natural to me, but I won’t judge. 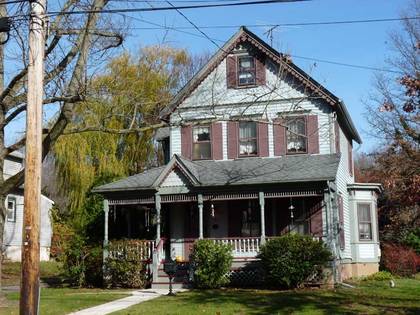 Walking south on Seguine Ave. from the Prince’s Bay SIR station, you’re on one of the oldest roads in the neighborhood and thus, there are a lot of small, modest homes that are nearly a century old or older, with wide, generous lawns. This is the opposite from how modern developers and architects do it today; for them, grass is just wasted space, as well as just two floors. 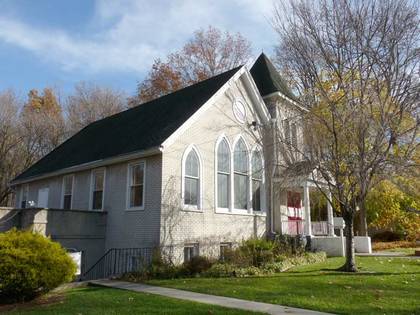 The Reformed Church of Prince Bay (note the continuing spelling confusion of Prince’s Bay) bears a 1914 cornerstone—it must’ve been one of the few buildings in Prince’s Bay when constructed. According to Staten Island Genealogy it began as a Sunday school in 1895 and then became the Prince Bay Union Church; it gained its present name in 1921. The church’s garden contains four rose bushes planted in honor of four Army chaplains aboard the USS Dorchester when it was sank by a German U-boat in February 1943. The chaplains perished when they gave up their life jackets to fellow shipmates. 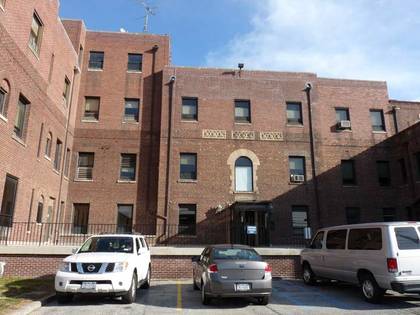 Staten Island University Hospital stretches along the west side of Seguine Ave. between Keating and Melville Sts. It was instituted in 1935 as the Richmond Memorial Hospital and the original building still stands on Seguine and Melville. The original brick building was boxy and utilitarian, but there are interesting elements like the quatrefoil designs above the front entrance. SIUH has two campuses in Staten Island, here and in South Beach along Seaview Ave. Unfortunately, its original building on Castleton Ave. in New Brighton, a magnificent, castle-like structure, was abandoned and left to collapse for two decades before it was finally razed. 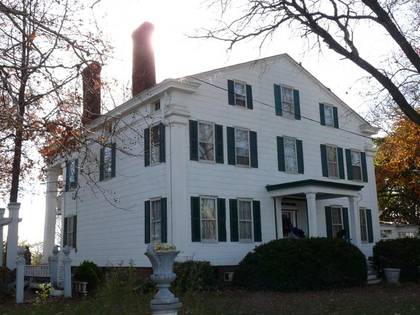 At the end of Seguine Ave. stand two historic buildings associated with the Seguine family whose fates couldn’t have been more different. Joseph H. Seguine’s grand Greek revival mansion, built in 1840 at 440 Seguine Ave. but entered from Hank Pl., is reminiscent of Southern plantation houses. Joseph Seguine was a prosperous oyster trader, entrepreneur, farmer, and first president of Staten Island Railroad, which still has a Prince’s Bay stop. Unfortunately, the house’s most attractive feature, the porch with two-story pillars, is inaccessible from Hank Pl., this being a privately-owned dwelling. The porch is best seen from Lemon Creek Park at the foot of Seguine Ave. in winter.

Joseph Seguine (1801-1856) was also the president of the Staten Island Oil and Candle Company. He could walk to his place of business, since it was located in a large complex on Purdy Pl. just a couple of blocks away from the mansion. On the grand facade facing the water, six monumental square columns support a second floor gallery and classical pediment with a sweeping fanlight. Inside the house, Greek revival mantels and plasterwork grace the spacious rooms; a wide lawn faces the bay.

In 1981, George Burke purchased the house and magnificently rehabilitated it. He donated it to the NYC Parks Department in 1989; the city will use the mansion as a museum after Burke’s decease. The house is open to the public on limited occasions such as Open House New York weekend in October. The mansion is also the subject of a coffee table book published in 2015. 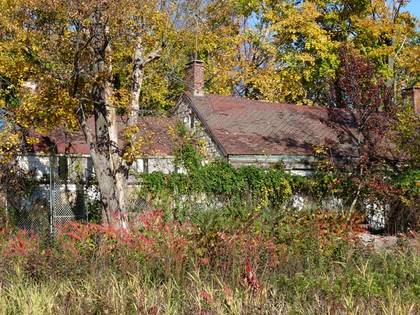 Compare the Seguine Mansion to another building of great age, but in dilapidated condition, a few feet to its south across Seguine Ave. The status of this colonial-era Manee-Seguine House has only gotten worse as the years have gone by.

This boarded-up, abandoned farmhouse  at 509 Seguine Ave. at Purdy Pl. may be one of Staten Island’s oldest dwellings. It has passed through the Seguine and Manee families, both early area settlers; the Manees likely added to an original one-room dwelling built late in the 1690s with a two-story fieldstone section early in the 18th Century. The Manee family sold the house and lands to the Seguines in 1786, and Joseph H. Seguine spent his boyhood here. By the 1870s, the house had been sold to Stephen Purdy, who operated it as a resort hotel for a few decades.

The old house is best seen today in winter from Purdy Pl.; a closer view can be had if you brave the weeds and thorns and walk right up to it from there. Since I saw it last, a chain link fence has been placed around the old building, making it harder to photograph than ever. Most passersby consider it an abandoned hulk and never guess that some of the building is 320 years old. The Manee family were French Huguenot (Protestant) immigrants, as were the Seguines. 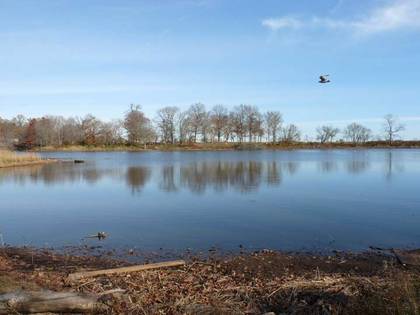 Walking along Holten Ave. you get a glimpse of Wolfe’s Pond and the park that surrounds it. Named for a freshwater pond situated only a few yards from salty Raritan Bay, Wolfe’s Pond Park is named for original landowner Joel Wolfe, who farmed the land here until 1857. It became a public park in 1929. Snowy egrets, as well as blue herons, kingfishers, ducks, geese can be found along the pond, and bird fans will also find waxwings, scarlet tanagers and thrushes in the woods. Hurricane Sandy compromised the pond and made it brackish, so it is awaiting repairs.

A walk on the path along Wolfe’s Pond enables you to get “lost” in the jumble of galleries and paths in the forest. One of the paths takes you to a giant black oak tree whose trunk boasts a five-foot diameter. I couldn’t get too far from Holten Ave. because one of the pedestrian walkways was washed out and I didn’t trust my sense of balance enough to make it across. 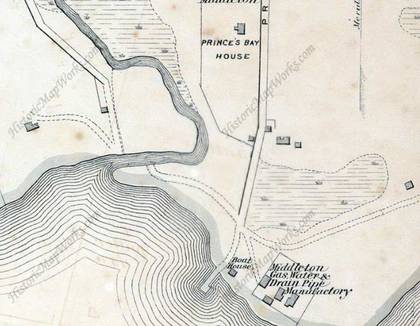 Here’s an 1874 atlas plate of Prince’s Bay. Raritan Bay and its inlet, Prince’s Bay, are at the bottom, Lemon Creek at left. The “Prince’s Bay House” is the Seguine Mansion, while the Manee-Seguine House is the largest gray rectangle just above the swampy area. Intriguingly, at the bottom is the Middleton Gas, Water and Drain Pipe Manufactory. Originally this had been a palm oil manufacturing plant owned by Joseph Seguine, then a drain pipe factory, until in 1876 the Johnston brothers, Algernon, Wilbur, Melville and William, purchased it and turned it into a dental supplies factory.

In 1881 the Johnstons merged with a dental supplies firm founded by Samuel Stockton White in 1844. The White complex attained its largest size in 1927 and remained in Prince’s Bay until 1972, turning out anything found in a dentist’s office including dental chairs, drills, metal fillings, toothpaste, mouthwash, dentures and bottled anesthetic gas. The company then relocated to Piscataway, New Jersey and has split from its parent company: there is now an S.S. White, which produces flexible airshafts for aircraft and state of the art surgical instruments and an S.S. White Dental, which continues to produce dentures and dental equipment. 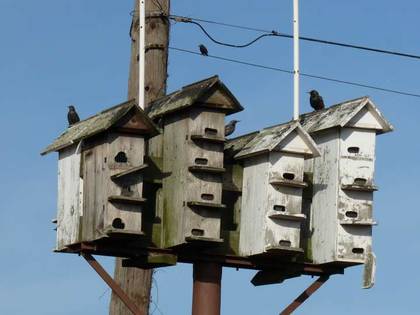 The martins migrate to South America for the winter months, but spend spring and summer here. Native Americans discovered that the martins would nest in empty gourds that they would hang on trees. The martins were useful because they preyed on insect pests, and the hanging gourds made them less susceptible from attacks from hawks, raccoons, cats, etc. The martins got used to the gourds, so the present birdhouses are shaped like them. The birds became so dependent on man that today, no eastern purple martins nest in the wild—only in shelters provided by people.