We have no idea what art is. 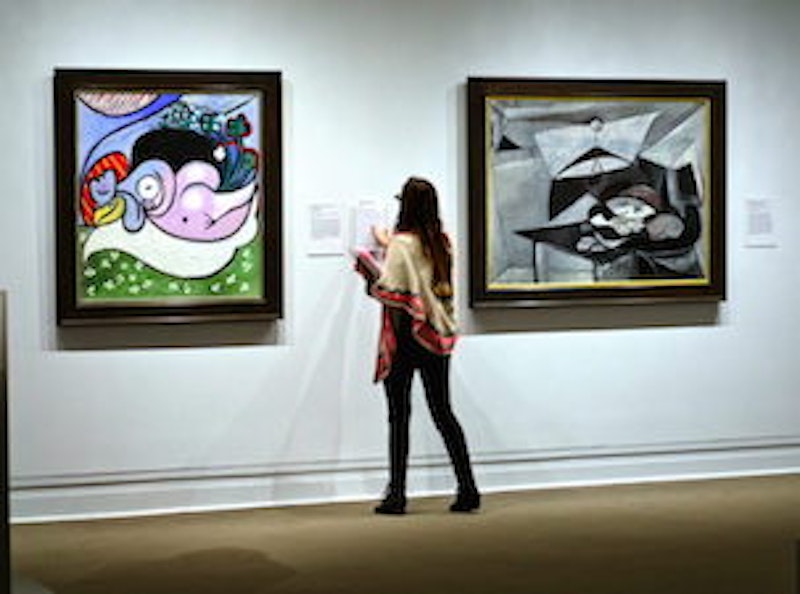 “All art is political” used to be a statement that caused controversy among philosophers, writers and artists. It’s still a subject of many discussions that pertain to the tension between ethics and aesthetics. However, today, almost everything can become a political act. Even, for example, what we eat or don’t eat.

We’ve become blind to beauty and how we relate to art has become an exercise in ambiguity. We’re a society that’s uncomfortable in the skin of existential nuances, and in the interest of faux justice, we scream about unfairness and misogyny. We have no idea what art is anymore or how to look at or reflect on it.

On November 3, something happened at the Metropolitan Museum of Art that illustrates society’s further withdrawal from the aesthetic experience. An artist, Michelle Hartney, decided to show the gallery patrons the truth about Pablo Picasso and Paul Gauguin. Hartney wrote a few paragraphs on both artists’ immorality and mistreatment of women and pasted the statement next to the paintings of both Picasso and Gauguin.

“The MeToo movement gave me the push to start incorporating justice for women within the art world,” says Hartney. She’s not interested in censoring art, however she wishes to put these paintings in their, presumably, historical and biographical context. People ought to know that Picasso and Gauguin were women haters before they look at the paintings.

On the surface, Hartney is absolutely correct: both Picasso and Gauguin had strange, complicated, and often hateful relations to women. Writing in his journal, Gauguin described women as “fat, vicious, and stupid with nothing spiritual.” Both men used them either for carnal or artistic purposes. But Hartney’s justice-seeking imposition denies the very metaphysical existence of the particular paintings that she’s after.

To put these paintings in context (as Hartney claims) by bringing in the personal lives of artists is to have the view of art wholly devoid of pleasure and aesthetic experience. Hartney’s not interested in discussing or showing art patrons actual elements of paintings. Rather, the objective is to metaphysically annihilate the painting and any possibility of an aesthetic experience. For Hartney, art’s completely unimportant, and in this case, she could’ve picked any painting at all in order to further her political agenda and message.

Metaphorically, Hartney’s standing between the viewer and the painting and determining, for the viewer, how he or she should look at art. In one movement, she totalizes both the work of art, by reducing it to a pile of biographical pieces, and the viewer of art, by an imposition that’s more of a nuisance than some shock performance art she’s presumably trying to create.

Art should be judged but not in the way that Hartney and people like her are doing. In order to judge art, we must first recognize it as something separate from us—an object of beauty that calls on us to stop the daily grind and enter into the space devoid of vulgarity and kitsch. Roger Scruton writes, “The judgment of beauty, it emerges, is not merely a statement of preference. It demands an act of attention.”

For something to demand our attention, it must be completely separate from our very selves. This demand may come from another human being or an art object. This call for attention isn’t composed of a totalitarian fist that demands we become prisoners of a painting, sculpture, or music composition. Quite the opposite, it’s a call to enter into a dialogue with the work of art, a relationship between one timeless entity and a living, breathing human being whose interior life is affected by this dialogic imagination. As Scruton writes, “Beauty makes a claim on us: it is a call to renounce our narcissism and look with reverence on the world.”

Art is useless in the sense that we can’t possibly find a utilitarian value in a painting, sculpture or musical composition. We can’t scientifically measure it in order to fill out a series of rubrics and deliver the final verdict of its value or lack thereof. And yet this is exactly what Hartney has done. She has made her own statement into an object of performance art and used the painting for her own ideology. Hiding behind the inauthenticity of the MeToo movement, Hartney has placed herself in the center of the painting. Her feminist impositions have violated and desecrated the layered meaning of the paintings in question.

Whether artists should be respected and whether we should continue to recognize his art because of his dubious moral life is a valid question. But Hartney isn’t interested in asking that. She claims she’s not interested in censoring art but in a sense, she is censoring it. By becoming an impediment and an ideological nuisance wrapped in social justice, Hartney is saying that Picasso or Gauguin’s art should be ignored. Thankfully, a short insignificant performance like this cannot possibly annihilate the beauty of art or the possibility of a human being answering beauty’s call.