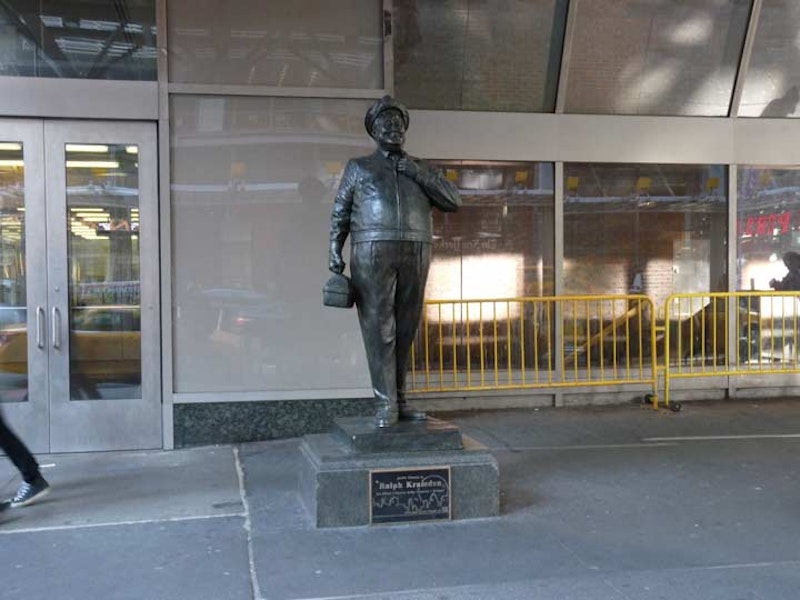 Hell's Kitchen, the area west of 8th Ave, and between 42nd and 59th Sts., was once one of the city's most notorious slums. In recent decades, the neighborhood has made great strides of improvement and 9th Ave., especially, is known as an ethnic food capital.

There are a few stories about how Hell's Kitchen got its name. One is that in the early part of the 20th Century, a character named Buttermilk John ran a grocery at the corner of 10th Ave. and 34th St.. John, over 80 at the time, related the story of a hermit who lived in a shack under a bluff at the corner of 11th Ave. and 39th St. The local youth took to calling him "that old devil livin' under the hill." The hermit's fire at night could be seen by the entire neighborhood, and local residents, many of whom were farmers, referred to the light as the fire in the devil's kitchen. Despite efforts of real estate agents to rename the area "Clinton" or later, "Times Square West," the names haven't stuck.

Bus driver and blowhard Ralph Kramden, who Jackie Gleason portrayed off and on for over 20 years, welcomes out-of-towners at 8th Ave. and W. 41st St. at the Port Authority Bus Terminal. The statue by sculptor Larry Nowlan was commissioned by TVLand, the cable TV channel, and installed in August 2000. 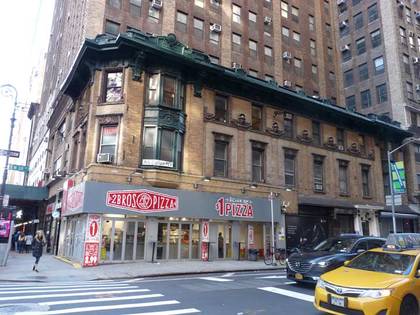 Accompanied on both sides of 8th Ave. by high-rise office buildings built in the 1920s and 30s, #300 W. 38th St., on the southwest end of what was Times Square’s sleaziest section holds forth, perhaps bloodied over the years, but still intact. It was constructed in 1903.

#300 W. 38th was built as a hotel catering exclusively to actors who appeared in the many Broadway theaters located on the blocks north and east of this corner. Its chief architect was Hungarian immigrant Emery Roth (1871-1948) who went on to become one of the preeminent architects of hotels and residences in NYC—among his later designs were the Warwick Hotel, where the Beatles stayed during their first NYC visit in February 1964, as well as the St. George Hotel in Brooklyn and the twin-towered San Remo and Normandy Apartments in Manhattan. The firm Emery Roth & Sons is still active today and has designed dozens of prominent NYC buildings including the Pan Am, now Met Life, Building and with Minoru Yamasaki, the first World Trade Center. 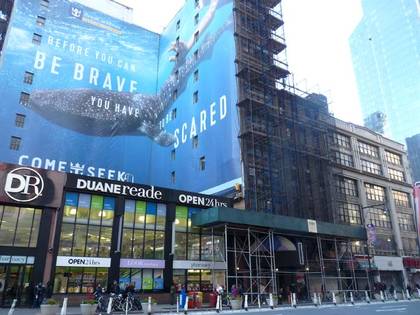 The building in the scaffolding next to the giant cruise ship ad and a ubiquitous Duane Reade used to be home to Show World. Show World Center, 8th Ave. just north of W. 42nd St., opened in 1977, the year the Bronx burned. It was also possibly the year the Deuce peaked in ignominy, though some say that didn’t really happen till the 1980s. After an abortive run at legitimacy, Show World went back to doing what it has always done so well, but it finally succumbed a couple of years ago.

A description from USA Today in 1994: “Show World Center is a four-story monument to New York’s thriving retail sex industry. On display in the lobby’s window is a clipping from The New York Times describing the center as ‘the McDonald’s of sex.’ Inside, men stroll through a room lined with movie peep booths that look like confessionals. Hidden speakers blast Madonna’s voice: ‘Let your body move to the music.’ Customers are hit by the smell of strong disinfectant, used throughout the shop to clean the floors in the booths.” 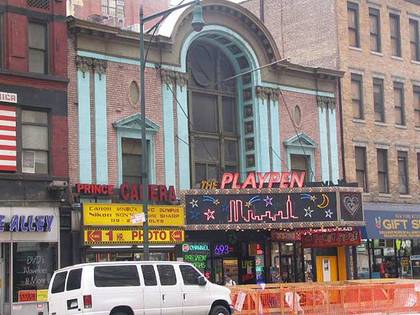 The Playpen Theatre, 8th Ave, and W. 44th St., part of Times Square’s fading porno district, was notable as the former Cameo, one of Manhattan’s last remaining vaudeville houses. A close inspection revealed two cameos, female figures on either side of the entrance, one holding a film canister and the other a camera. These could be playful depictions of Greek mythological Muses, though of course there was no Muse of Photography. The Playpen neon sign on the marquee still showed the Twin Towers. There’s still a Playpen, but it moved a couple of doors down. The Cameo was torn down a decade ago, and a Shake Shack is there today. 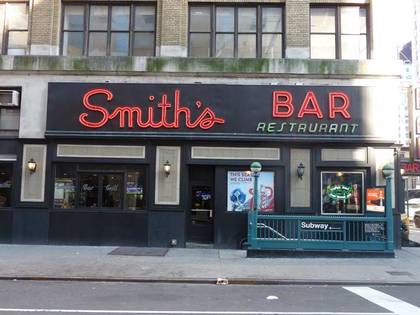 Smith’s, at W. 44th and 8th, opened in 1954. Its glorious neon sign in red and green blazes brightly at night. In New York City’s Best Dive Bars, Wendy Mitchell describes it: “The Irish bartender was incredibly welcoming, even if the crowd mostly kept to themselves. The regulars just sort of grunted to one another, but after a few hours of drinking, you could be their next buddy. That is, if you can stomach the stench coming out of the men’s room and the musical accompaniment of Was Not Was’ ‘Walk the Dinosaur.’” 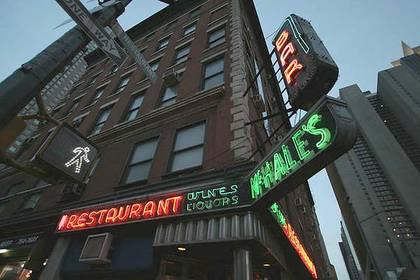 After 62 years on the corner of 8th Ave. and W. 46th St., McHale’s was evicted from its building, which was summarily demolished; a severe-looking gray, metallic building “Platinum NYC” with the healthier fare of Pret a Manger now occupies the ground floor. It was a favorite hang for Theatre District stagehands, and boasted about its hamburgers, though many other bars do the same. I’ve never had a bad bar burger.

A short while after McHale’s closed, I was slouching down W. 24th St. and there was one of the McHale’s neon sign on the sidewalk in front of an antiques shop. I never got to drink at McHale’s. There were more important people who need a view of New Jersey. Fortunately, the vertical McHale neon’s was reinstalled at Emmett O’Lunney’s on W. 50th St. a few blocks away. I hope the other signs found a home.